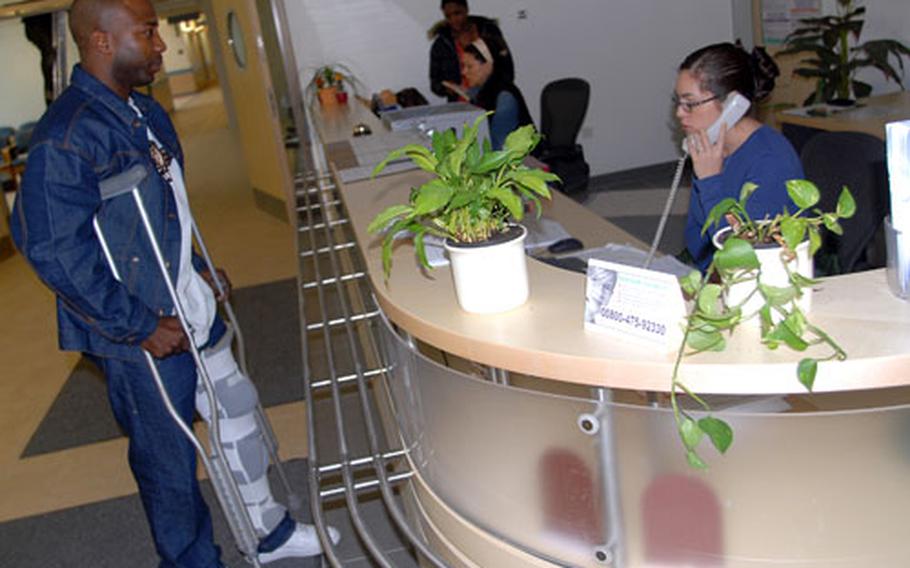 A few hundred volunteers of all ages walked along in a sometimes ragged line Thursday, trying to herd rabbits living near the runway at Aviano Air Base, Italy, into nets. About two dozen were captured. (Seth Robson / S&S)

GRAFENW&#214;HR, Germany &#8212; The medical side of a newly renovated health/dental clinic opened for business here Tuesday with staff promising to add more services as soldiers and family members arrive at the garrison.

The opening concludes Phase II of a three-phase, $12.5 million project to expand the combined clinic, according to data provided by Susanne Bartsch, a spokeswoman for Efficient Basing Grafenw&#246;hr.

The project is part of a $600 million expansion of the Grafenw&#246;hr training area that will see the base grow from a 1,000-soldier garrison with 2,000 military family members to a brigade-size facility with 4,500 active-duty soldiers and 7,000 family members.

The combined clinic project involved renovating the existing 15,000-square-foot medical center and linking it to a new building, increasing the clinic&#8217;s size to about 49,000 square feet, officials said.

One of the first soldiers to use the renovated clinic was Staff Sgt. Seydou Thierno, 32, who serves with the 313th Rear Operations Center, a Reserve unit out of Kaiserslautern.

Thierno, who injured his knee Wednesday during a training course at Grafenw&#246;hr, said he was well-treated.

&#8220;Last night we did some PT (physical training) and my knee gave out. They (clinic staff) have been very helpful. I got to see a doctor and they referred me to Landstuhl [Regional Medical Center]. I need a patella operation. I had the other knee done a couple of years ago,&#8221; he said.

Phase III of the project includes building a physical therapy center, offices and conference rooms in the medical center, he said. On the side of the clinic, the base dental clinic is expanding from 10 chairs to 31 chairs.

The new facility includes a two-window pharmacy that will get an automated dispensing system next month. The number of ear-testing booths at the clinics audiology department will increase from four to six in the next six months, Caffrey said.

The clinic includes an acute-care room, close to an ambulance parking area. The room is for patients with urgent issues such as a need for intravenous fluids, electrocardiograms or asthma treatment, he said.

&#8220;It is not an emergency room because we are not an emergency treatment center,&#8221; said Caffrey, adding that emergency cases and people who need to stay overnight will be sent to nearby German hospitals.

&#8220;This is a primary-care clinic. We provide newborn, pediatric and adult routine and preventative medicine. We can treat some minor injuries and acute issues, and we will transfer outpatients who need a higher level of care,&#8221; Caffrey said.

The clinic includes X-ray and ultrasound equipment. Its laboratory has expanded with staff and instruments moved there from the recently downgraded W&#252;rzburg hospital, he said.

&#8220;Other clinics will send things here for testing and that will mean a faster turn around for patients,&#8221; Caffrey said.

The clinic eventually will offer optometry services but a decision has yet to be made on when those will start, he said.