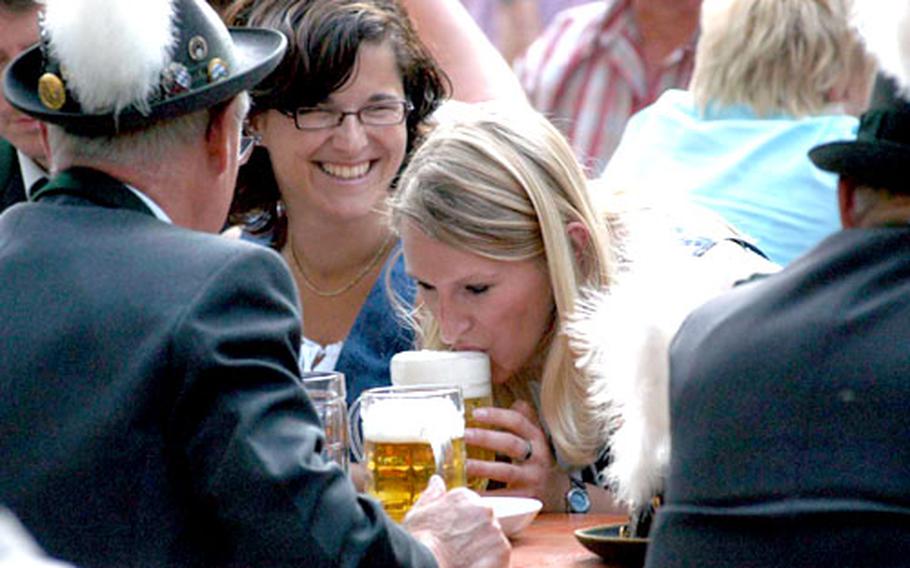 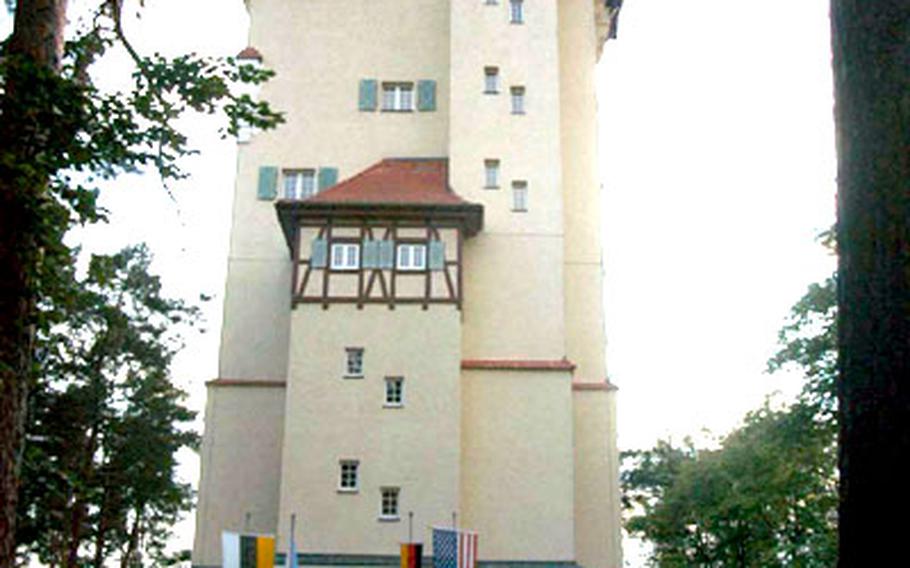 Hundreds of German and American citizens gathered in the shadow of the Grafenwöhr training area&#39;s most recognizable structure — the giant, ornately-decorated water tower — on Thursday to officially kick off the regional 95-60-50 celebrations. (Ben Murray / S&S)

GRAFENW&#214;HR, Germany &#8212; This summer, German and American communities around the Grafenw&#246;hr, Hohenfels and Vilseck training areas are marking three anniversaries being called the 95-60-50 celebrations.

Coordinated to commemorate the 95 years of use of Grafenw&#246;hr as a military training area, 60 years of American presence in the region and 50 years of service by the German army, officials in the three towns have set up events to mark the occasion and bolster military-civilian relations.

But every big anniversary party needs to start off with a bang, so in a rare Thursday night event in Grafenw&#246;hr, the security gates were raised, the hair was lowered and German and American citizens were allowed to commiserate on American turf.

Even though the gates of the training area are just a short distance from downtown Grafenw&#246;hr, most residents are not allowed to go inside to see the source of the explosions that shake their windows and rattle their china.

Hundreds of residents took advantage of the open gate, with entire families and local citizens of all ages showing up for the soup, beer and music.

Starting with a parade in the town center, a brass band led in representatives of the German and American militaries and communities onto the post, followed by the mobs of local residents.

Collecting under the hallmark feature of the base, the soaring, ornately decorated water tower, the crowd was served bowls of Eintopf, or Bavarian stew, cooked up by German troops.

With the base in the midst of an enormous expansion destined to impact the local community in myriad ways, Thursday&#8217;s event provided a simple way to maintain good relations between the military and civilians, Eby said.

The U.S. military is spending hundreds of millions of dollars to more than double the capacity of the training area over the next several years, creating a constant drone of construction in the area that supplements the frequent artillery firing.

Lt. Col. Franz Lienert, commander of the German forces in Grafenw&#246;hr, also recognized the tolerance of the local population in his speech at the event.

After raising beers with local mayor Helmuth W&#228;chter, Brig. Gen. Mark Hertling, outgoing commander of the 7th Army Training Command, took his turn at the podium, and briefly thanked attendants in a speech delivered in German.

Hertling also marked the start of four days of events both in and outside of the post during the Fourth of July weekend. Grafenw&#246;hr&#8217;s major summer festival is planned for Saturday and Sunday , along with a raft of children&#8217;s events and a fireworks display.