Students arrive on the first day of Camp Army Challenge at Grafenwöhr, Germany, on Sunday. The camp is for children of deployed troops. (Seth Robson / S&S)

Students arrive on the first day of Camp Army Challenge at Grafenwöhr, Germany, on Sunday. The camp is for children of deployed troops. (Seth Robson / S&S) 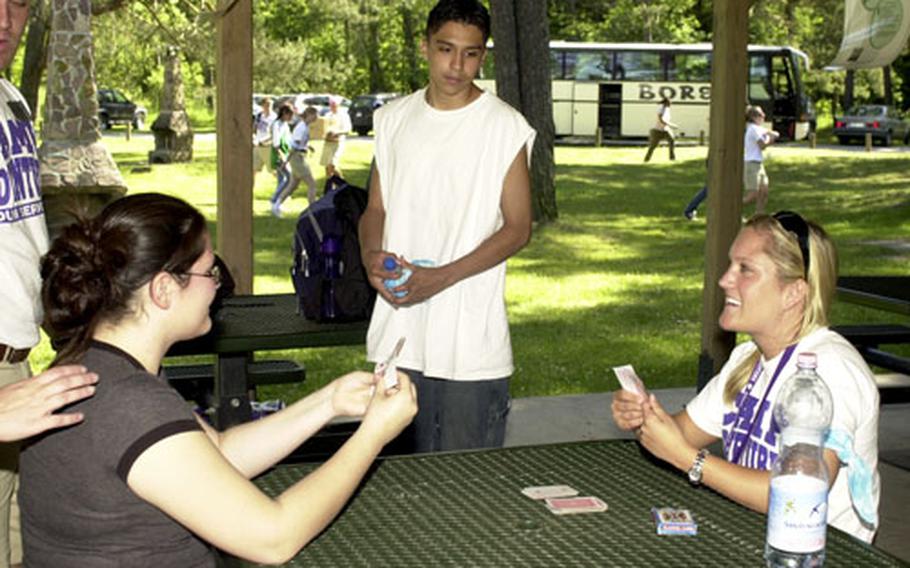 GRAFENW&#214;HR, Germany &#8212; One of three European summer camps for children of troops deployed in Iraq, Afghanistan and other places around the world began here on Sunday.

Thirty-six high school students from European military communities are participating in Camp Army Challenge at Grafenw&#246;hr. A total of 160 middle school kids signed up for camps at Camp Darby, Italy, next month.

Seventeen counselors from the Camp Adventure program, which also is running this year at military communities worldwide, are involved in the Grafenw&#246;hr camp, she said.

Grafenw&#246;hr&#8217;s other camp director, Melody Vance Taylor, 49, of Mattapony, Va., said the camp would teach kids ways to cope while one of their parents is away.

The camp&#8217;s high-risk activities, such as rock climbing, were one way to teach the children life skills, she said.

The camp also will give the kids an insight into life in the military. For example, a sergeant will visit the camp to demonstrate military robots that can be used to search buildings or defuse bombs. And the campers will learn to navigate using global positioning systems, she said.

The first kid to show up at Grafenw&#246;hr on Sunday was Vilseck Middle and High School student Mercedes McLaughlin, 16. Her father, Staff Sgt. Heath McLaughlin, has been in Iraq on his second tour but recently came home on leave, she said.

McLaughlin said her father, who works at the Joint Multinational Training Command, was stressed during his leave because of all the changes that had happened at work while he was away, such as the arrival of the 2nd Cavalry Regiment at Vilseck.

Life is harder without her father at home, she said.

The teen said he is not looking forward to another year&#8217;s separation from his father, who was in Iraq in 2003.

Not only would he lose a football and video games playmate, Garnica said he would be left as the oldest male in his household, which includes three sisters and a brother.

Garnica said he expected to keep up his regular chores, taking out the trash and recycling, while his father was away.