Grafenwöhr area bikers get together to promote safe riding 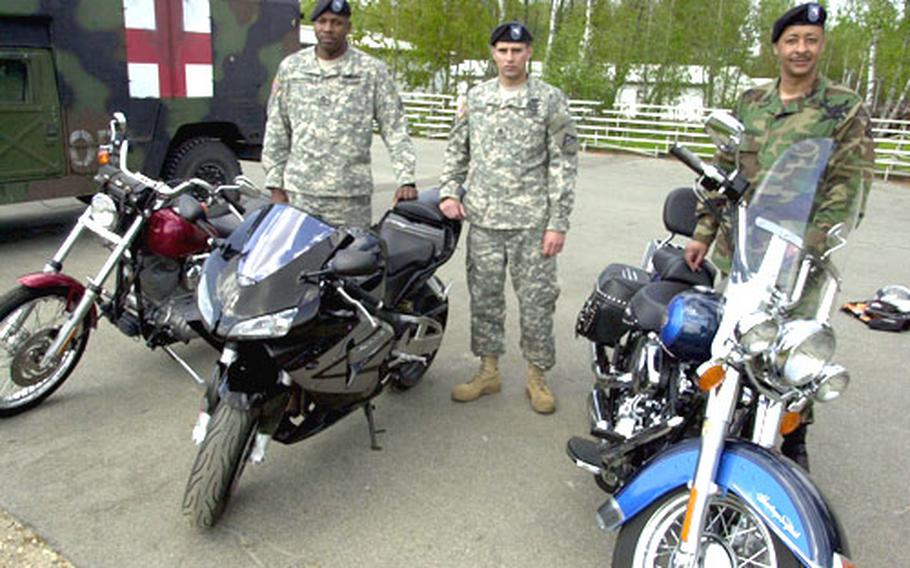 GRAFENW&#214;HR, Germany &#8212; Motorcycle riders here have formed a club to teach new riders safe techniques and get them used to German riding conditions with group rides on local roads.

Grafenw&#246;hr and nearby Vilseck are expecting a lot more American motorcycle riders this summer with the arrival of more than 3,000 soldiers from the 2nd Cavalry (Stryker) Regiment, said Command Sgt. Maj. James Campbell, who recently left his job as commandant of the 7th Army Noncommissioned Officer Academy in Grafenw&#246;hr.

Campbell, a 47-year-old Columbia, S.C., native, is one of about 20 members of the Grafenw&#246;hr motorcycle club. He said new arrivals could learn a lot from old hands with knowledge of local roads.

Campbell said he got his first motorcycle in 1981 and has been riding in Germany for two years. These days he rumbles along on a blue 1450cc Harley-Davidson Heritage Soft-Tail. The motorcycle club meets every other Thursday at Grafenw&#246;hr&#8217;s Tower Inn to plan group rides and talk about motorcycle safety, he said. Their next meeting is this week.

Motorcycle safety courses offered by the Army in Europe are good but do not put riders in practical situations. The motorcycle club takes new riders on group rides where they can learn about safety on the road, Campbell said.

Key tips for riders in Germany include keeping a safe distance from the vehicles ahead, not weaving in and out of traffic, and not passing cars in a stau or traffic jam, he said.

&#8220;In the States the roads are bigger. Here you have a lot of back country roads where there are no painted lanes,&#8221; said the Crockett, Texas, native, who rides a 1300cc Suzuki Hayabusa.

So far this fiscal year the Army has lost 25 soldiers in motorcycle accidents, including two in Germany, according to figures released by the Army.