Governor: Many issues left to resolve on Guam 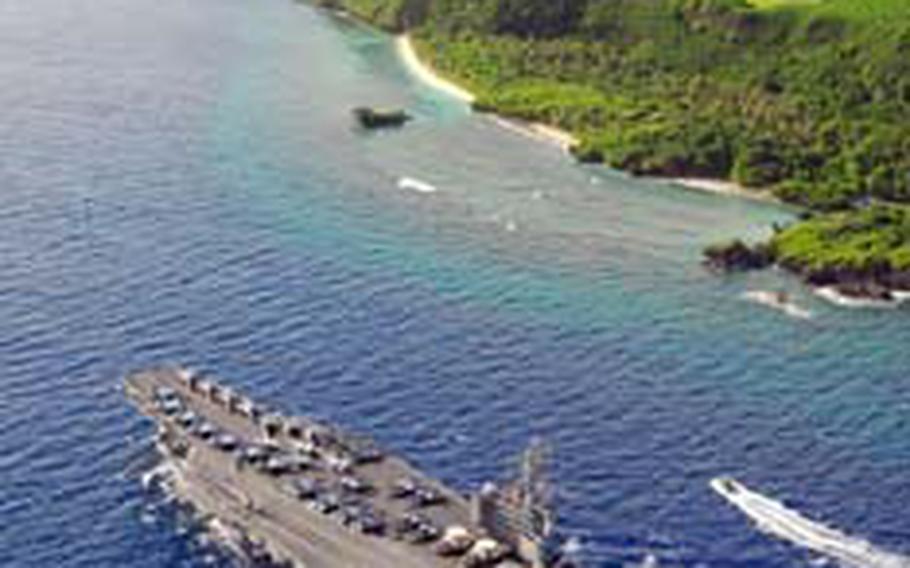 The aircraft carrier USS Ronald Reagan, flagship of Carrier Strike Group 7, U.S. 7th Fleet, visited Guam earlier this month. The Reagan and other ships of the strike group are set to visit South Korea this week for port visits at Busan and Chinhae. (Jennifer S. Kimball/Courtesy of the U.S. Navy)

HAGATNA, Guam &#8212; The federal government has been slow to respond to Guam&#8217;s infrastructure requirements and public needs as the military looks to use the island to base at least 8,000 Marines, Gov. Felix Camacho said Friday.

In the 3&#189; years since the expansion plans were announced, he said, many concerns have gone unanswered as Guam tries to secure money for transportation, water, sewage, landfill and other improvements needed to accommodate the influx of people and construction.

"It&#8217;s been very frustrating for the government," Camacho said in an interview with Stars and Stripes. "It&#8217;s such a bureaucratic mess to secure funding. It&#8217;s been slow to come."

Repeated comments from young protesters at the hearings have swayed some public officials to ask for more time to study the proposal. Others, such as Sen. Judith Guthertz, have changed their positions on working with the military to secure more land on the island for the Marines&#8217; base and a firing range. Bases currently sit on about a third of Guam&#8217;s 212 square miles.

Much of the land the military wants is controlled by the government of Guam, including some reserved for a homesteading program for native Chamorro families.

Last week, Guthertz, a Democrat who chairs the legislature&#8217;s Committee on the Guam Military Buildup and Homeland Security, said she could support leasing Guam-controlled land from the government. But Friday she said she&#8217;s much more reluctant to do so.

"It would have to be a very powerful offer," she said.

Guthertz said she wants the military to take another look at its own land.

Camacho, a Republican whose second term ends this year, said it&#8217;s too early to call the military&#8217;s desire for more land a deal breaker. Instead, he said, it could put Guam in a better position to negotiate for money to improve its ailing infrastructure.

Guam is a U.S. territory without a full vote in Congress. The military could take public or private land by condemnation, a tactic opposed by island leaders, including Camacho. The retired Marine Corps general leading the buildup, David Bice, has said he does not believe the Pentagon will pursue that option.

The island&#8217;s chamber of commerce is one of the few groups speaking out in favor of the project.

The chamber released a list of 14 reasons why the buildup is vital to Guam, including new jobs, a larger tax base, and the opportunity to sell or lease land to the military.

"What is Guam going to do if we don&#8217;t do this?" said Carl Peterson, the head of the chamber&#8217;s military affairs committee, on Friday afternoon.

Camacho, meanwhile, has been pursuing other options he says are vital to ensuring Guam can withstand the buildup. The island is awaiting approval of a $50 million Department of Transportation grant and $49 million in loans from the U.S. Department of Agriculture, according to Camacho.

That money would be used to improve the island&#8217;s commercial port, the single gateway for all construction equipment and supplies needed for the estimated $10.72 billion plan to move the Marines from Okinawa to Guam. The buildup plan also includes dredging Apra Harbor for an aircraft carrier berth and adding an Army air-defense unit to the island.

"The government is not in any position to pay for the impacts," Camacho said. Not improving the commercial port, "could be the single point of failure."

The governor and the legislature both are planning additional hearings to solicit comments on the military&#8217;s environmental impact statement.

Camacho is planning a telethon-type event next month to allow people to call in, ask questions, and submit oral testimony. He&#8217;s also going to hold a forum at the University of Guam to appeal to high school and college students, many of whom have been leading vocal protests against the buildup plan.

Those emotional testimonies at the public hearings may not translate into responses from the military, Camacho said. Regulations require the military to only address criticisms and suggestions based on descriptions outlined in the environmental impact statement.

Anyone can still make comments on the military&#8217;s environmental impact at http://www.guambuildupeis.us/statement through Feb. 18.

Others are saying that&#8217;s still not enough time to review the thousands of pages in the document. Guam Senator B.J. Cruz and U.S. Rep. Madeleine Bordallo, both Democrats, are asking the Navy for more time to comment.

Both cited Secretary of State Hillary Clinton&#8217;s recent talks with Japan in their argument. Japan is paying for part of the Marines&#8217; move, but a newly elected government there has asked for more time to review the agreement. Clinton said last week she respected their request for time.

Bordallo sent a letter to Navy Secretary Ray Mabus on Thursday asking for the same courtesy for people on Guam.

"We should at least be accorded the same time," Cruz said in an interview Friday.