Government contractor in Afghanistan imprisoned for taking $300K in kickbacks 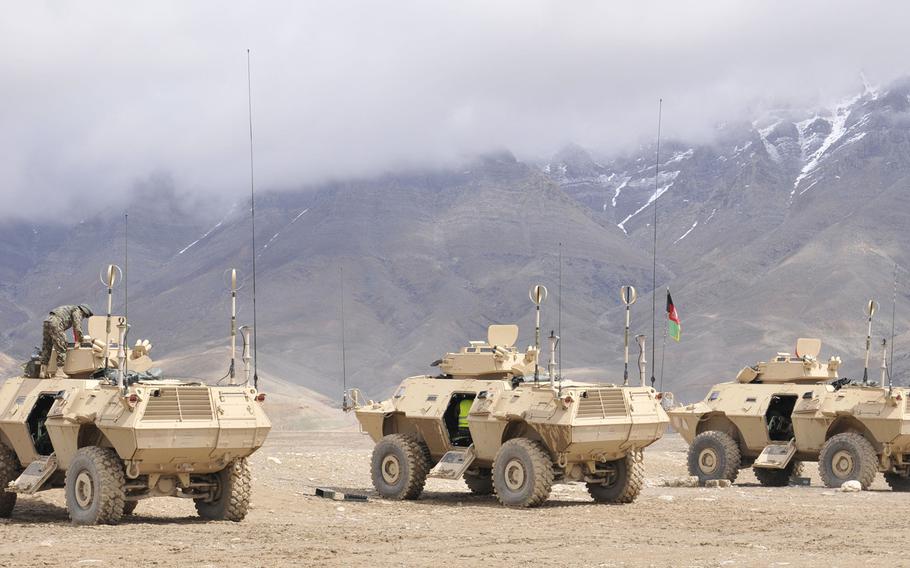 The Afghan army's Armored Branch School conduct a demonstration of the capabilities of the Mobile Strike Force Vehicles, during a simulated attack, and a live fire exercise, using a mock up of the area in a sand pit near Kabul in 2014. (U.S. Department of Defense)

The Afghan army's Armored Branch School conduct a demonstration of the capabilities of the Mobile Strike Force Vehicles, during a simulated attack, and a live fire exercise, using a mock up of the area in a sand pit near Kabul in 2014. (U.S. Department of Defense) An Afghan army soldier mans the gunner's turret of a Humvee in the early morning of March 8, 2012 in Paktika Province. (CJTF-1)

The former employee of a U.S. government contractor was sentenced to 21 months in prison for accepting nearly $300,000 in illegal kickbacks from an Afghan subcontractor, the Justice Department announced.

Nebraska McAlpine, 57, was sentenced Tuesday in Atlanta after pleading guilty in June to one count of accepting illegal kickbacks. McAlpine, from Smyrna, Ga., admitted he had agreed to help an Afghan executive obtain more than $1.6 million in subcontracts awarded by his employer, in return for the secret cash payments.

McAlpine lived and worked at a secure facility near the Kabul airport from February 2014 to October 2016, first for one U.S. contracting firm, then for another company that acquired it. During that time, he helped steer subcontracts from his employer to the Afghan executive’s two firms under two different contracts, he admitted in court.

The sole-source subcontracts meant the Afghan companies did not have to competitively bid for the work. Some of it was performed under an $8 million prime contract for maintenance of the Afghan Interior Ministry’s ultra-high frequency radio communications system in the Afghan capital.

One of the subcontracts was for up-armored and soft-skinned vehicles, for which the Afghan firm was paid nearly $1 million, based on McAlpine’s recommendation. A second Afghan firm he helped secure a subcontract was paid more than $700,000 for warehouse space in Kabul.

In return, the Afghan executive paid McAlpine more than $291,000 in at least three cash installments, according to government filings. In June 2016, another of the U.S. contracting firm’s employees stole about $108,000 of his secret cash stash, but McAlpine managed to smuggle more than $180,000 back to the U.S., where he deposited it in accounts at Navy Federal Credit Union and Bank of America.

The government did not name the Afghan firms or either of McAlpine’s employers.

Following his nearly two-year prison term, McAlpine will be on three years of supervised release and must perform 100 hours of community service.

Dozens of illegal kickback schemes, bribery and other forms of corruption involving government employees, servicemembers and contractors in Afghanistan and Iraq have been uncovered since 2001.

In a quarterly report last month, the Special Inspector General for Afghanistan Reconstruction listed McAlpine among at least five Americans who had recently been charged, indicted or sentenced for such crimes in recent months.

Blevins pled guilty in May to fraud-related charges after he and another former specialist, Michael Banks, devised a scheme in 2013 to over-order food and supplies meant for Special Forces members at a dining facility at Camp Dyer, Afghanistan. They used daily Afghan workers to smuggle the supplies to a local bazaar off base for sale on the black market.

Blevins was sentenced by a North Carolina court in September to 51 months in prison and three years of supervised release. He was also ordered to repay nearly $290,000 in restitution.

Banks was sentenced earlier this month to three years’ probation and was ordered to pay more than $144,000 in restitution for his part in the scheme after pleading guilty in May.