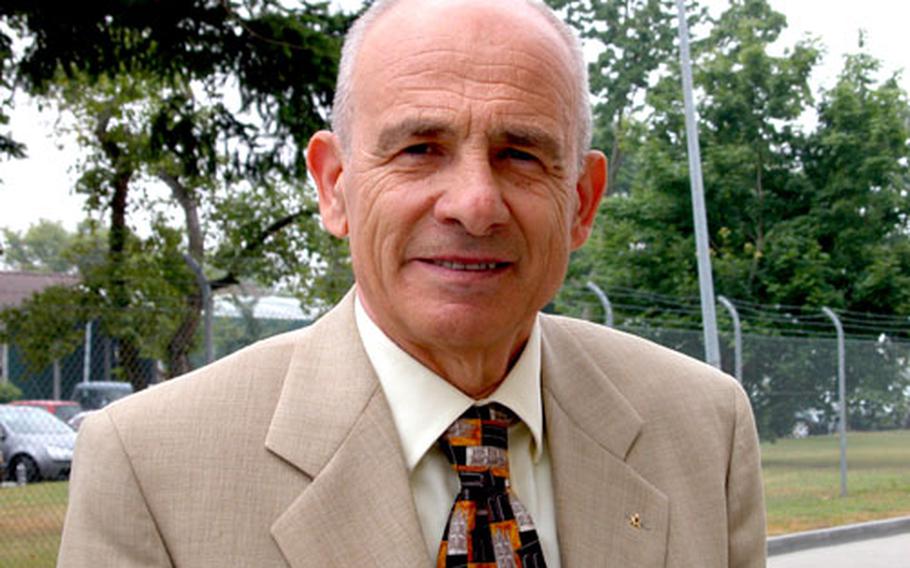 Larry E. Pisoni, president of Gourmet Italia, promotes pasta as good food that can be enjoyed as part of a healthy diet. (Jessica Inigo / S&S)

DARMSTADT, Germany &#8212; The man who sells pasta and other Italian products in U.S. commissaries in Europe and teaches Americans how to cook them is fighting back against diets that have been bad-mouthing carbohydrates.

Larry E. Pisoni is cautiously trying to reintroduce the food as a healthy choice through his Gourmet Italia food line.

First, Pisoni is backing his health claims with strong evidence of how Italians have been enjoying the Mediterranean diet through the centuries and still staying fit.

Then, he&#8217;s easing healthy carbs back into the American palate through children and the miracle of freeze-drying.

It&#8217;s a &#8220;pursuit of excellence&#8221; that he said uses only the best ingredients as described in the Mediterranean diet pyramid illustrated by the Harvard School of Public Health and Oldways Preservation and Exchange Trust.

For nearly 30 years Pisoni has been teaching Americans the secret of simplicity in cooking great Italian meals at his hotel on Lake Garda in Italy, where he holds cooking classes during ski vacations.

Now, he&#8217;s preparing to teach American children vacationing with their parents these same techniques with the hope that it will stick with them for a lifetime.

&#8220;No one understands the simple things in life better than a child,&#8221; Pisoni said, claiming that the best food is often the simplest. It&#8217;s not just what goes into a dish; sometimes it is what is kept out.

That&#8217;s why the founder of the Defense Commissary Agency&#8217;s pasta chain, who has been selling his products to the stores for the past dozen years, has decided to welcome children into the adult world of cooking.

Pisoni recently toured different U.S. installations in Europe to see what the interest would be in teaching children how to cook simple meals that will stay with them a lifetime.

The classes will begin with the coming ski season in November, Pisoni said. Classes will be offered with children paying only a nominal fee to join their parents in the kitchen.

He also is trying to combine taste with the ease Americans look for in life. He is introducing a line of freeze-dried sauces that should be on commissary shelves by the end of the summer.

The sauces are made by Gourmet Italia chefs, such as Frank W. Amato, who ensure the flavor is full and that the sauces can be brought back to life with minimal effort.

Amato said nothing more than some olive oil and boiling water is needed to make a delicious meal out of the freeze-dried products.

Many Americans are already familiar with the company. Gourmet Italia has eight bistros inside commissaries in Europe, including one that opened at RAF Lakenheath, England, earlier this month and is already serving up its signature dishes.

His favorite dish is a bowl of al dente noodles served with some good olive oil, a load of garlic and some Italian peppers &#8212; with nothing to complement it other than a glass of Pinot Grigio wine.

Larry E. Pisoni has had some intense love affairs in his life. But the most magnificent was with a lady he has admired for 60 years, then wrote about her soul.

Pisoni, the president of Gourmet Italia, wants to make good Italian food a way of American life. But his life&#8217;s work has really been to put his love affair with America in words.

Pisoni, 68, has found the essence of many things in life. He created and cultivated the Gourmet Italia food line sold at commissaries across Europe and has developed cooking courses that serve up only the finest ingredients in the simplest form.

Now he also has captured what he sees as the essences of America in an essay that he says illustrates her history and why he has loved her so.

The affair started in February 1945 during World War II when Pisoni was a 7-year-old boy in his hometown near Trentino-Alto Adige, Italy. He saw a crew of seven Americans bail out of a B-52 bomber that had been hit by Nazi anti-aircraft gunners.

The following day, the young Pisoni saw two of the Americans held in the town square. They looked nothing like the monsters they were made out to be. Still, they were killed, which was shocking to the young Italian boy.

The love bloomed later when Pisoni went to college in Ohio and met his American wife, Grace, whom he married 36 years ago.

And the affair continues today. Pisoni, a naturalized U.S. citizen, credits America and its actions in WWII for the current Italian way of life. He shows his appreciation by trying to model his life after America&#8217;s Founding Fathers, who he has been studying for the past 17 years and who he believes had the same mission he has: to improve the world.

Pisoni believes his essay, &#8220;The United States of America: A Social Experiment for the Betterment of Mankind,&#8221; is exactly what people need &#8211; a reminder of America&#8217;s glory and history.

He&#8217;s right. So far he&#8217;s received personally signed letters from the White House commending him on his work. First lady Laura Bush, Secretary of State Condoleezza Rice, and Lynne V. Cheney, wife of the vice president, are among those who have responded to him for expressing his love of country.

Pisoni&#8217;s essay can be read at the Gourmet Italia Web site.