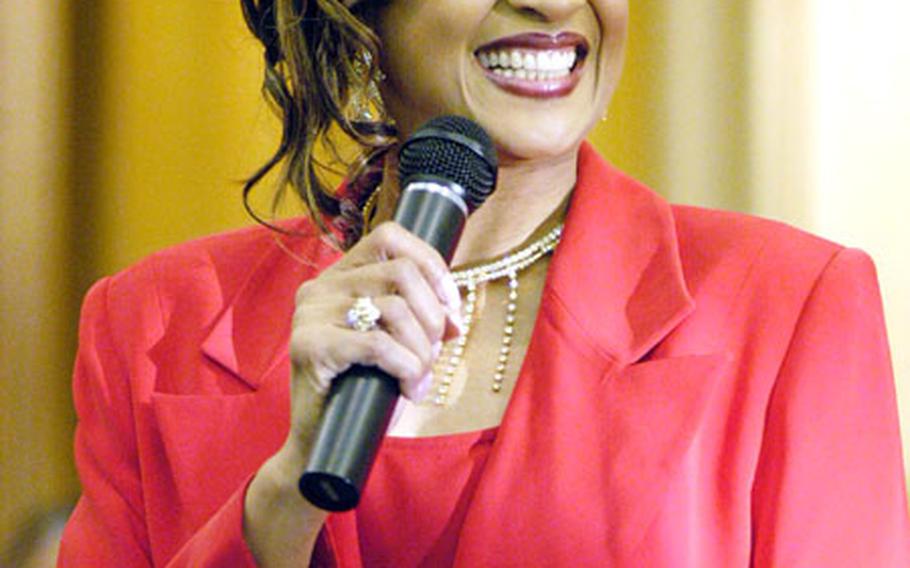 Dorinda Clark-Cole ministers to a crowded audience at the Camp Foster Chapel Saturday night during a free concert. Clark-Cole, a two-time Stellar award winner for gospel excellence says she loves her visit to Okinawa and wants to return. (Mark Rankin / S&S)

Dorinda Clark-Cole ministers to a crowded audience at the Camp Foster Chapel Saturday night during a free concert. Clark-Cole, a two-time Stellar award winner for gospel excellence says she loves her visit to Okinawa and wants to return. (Mark Rankin / S&S) 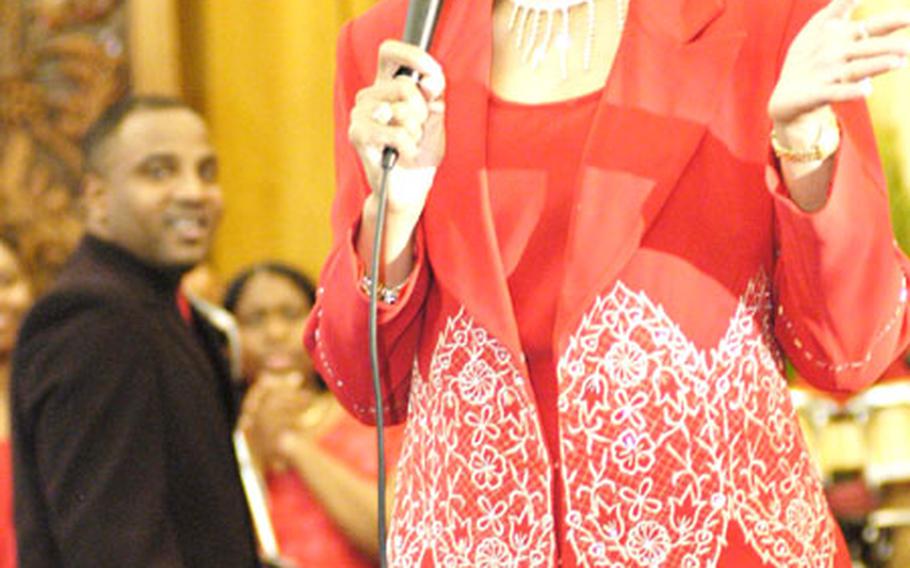 CAMP FOSTER, Okinawa &#8212; After seeing much of the Iraq war on television, gospel singer Dorinda Clark-Cole wondered at times what she could do to contribute to the morale and welfare of U.S. servicemembers.

She got her opportunity Saturday night at the Camp Foster Chapel, where she performed a free concert.

&#8220;This is my first time coming to Japan and you&#8217;ve made me feel welcomed,&#8221; Clark-Cole told the crowd as she encouraged them to continue to pray for each other. Between songs, she handed out red roses.

She said she&#8217;s sung all over the world but Saturday night marked her first performance for the military on Okinawa. She said she plans to return in the future.

Clark-Cole originally was invited to Okinawa to sing and teach at the annual Okinawa Jurisdiction Conference of the Church of God in Christ&#8217;s convention. But when Navy Lt. Tresa Carter, chaplain for Camp Foster Chapel, heard of an opportunity for Clark-Cole to minister to servicemembers, she asked the conference organizers to put together a free concert at the chapel.

Clark-Cole, who made her name singing with her sisters as The Clark Sisters, released her debut solo album in 2002 and said it is doing well.

Carter said Clark-Cole&#8217;s performance at the chapel is appropriate and timely, especially when many Marines from Okinawa are gearing up to mobilize and travel to Iraq for duty.

&#8220;I love being with military people and respect them for the commitment, dedication and service,&#8221; Clark-Cole said.

She said she has ministered on various Army bases in London, England, Europe, Germany and France.

She also accompanied former presiding prelate of the Church of God in Christ Bishop Chandler Owens on his official visit to Yongsan Garrison, South Korea, this year.

Now she adds Okinawa to her list of accomplishments.