GOP at odds with Pentagon over military funding 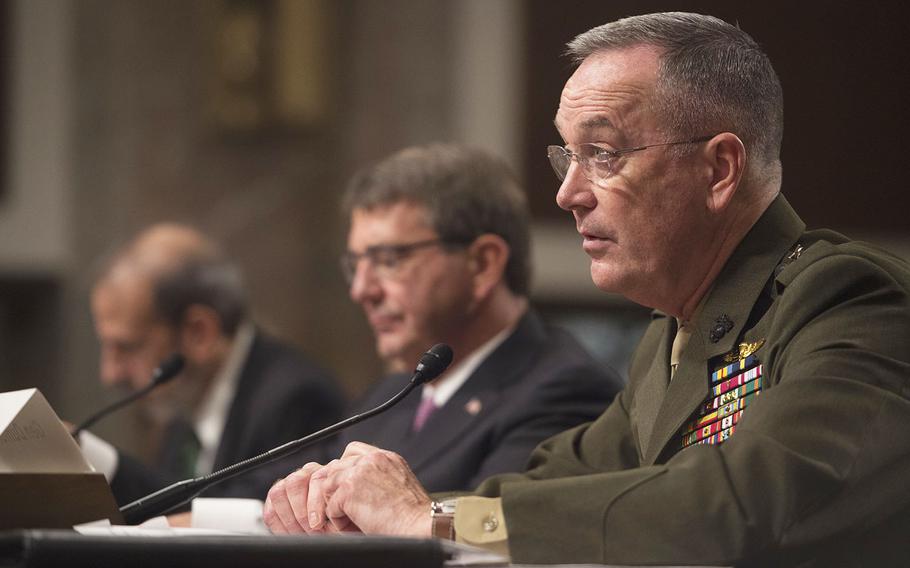 Chairman of the Joint Chiefs of Staff Gen. Joseph Dunford testifies before the Senate Armed Services Committee on the Department of Defense budget posture in review of the Defense Authorization Request for Fiscal Year 2017 and the Future Years Defense Program in Washington D.C., March 17, 2015. (Adrian Cadiz/Department of Defense)

WASHINGTON — The military is either dangerously short on funding or getting by OK under a bipartisan budget deal passed by Congress last fall, depending on which side of the Potomac River you are standing.

Sen. John McCain, R-Ariz., ran down a litany of reasons Thursday during a Capitol Hill hearing on the upcoming Pentagon budget on why the military services are billions of dollars short and falling behind against uncharted global risk.

But the Pentagon is less alarmed about its pocketbook. Defense Secretary Ash Carter and Gen. Joseph Dunford, chairman of the Joint Chiefs of Staff, who came across the river to testify before McCain’s Senate Armed Services Committee, said they are prioritizing spending but can protect the country with the amount of money tagged for defense in 2017.

Despite deep divisions, Congress passed a deal in November that eased spending caps for defense and domestic programs for two years. But McCain and other Republican hawks in the House and Senate are now angling to put more money into the military despite the deal, citing what they describe as an increasingly dangerous world.

“The unfunded requirements of the military services now total nearly $18 billion,” McCain said. “That represents the additional ships, airplanes, helicopters, fighting vehicles, training and other programs that our military leaders say they need simply to carry out our increasingly antiquated defense strategy at an acceptable level of risk.”

The Defense Department chose to put off modernization efforts and some procurement of equipment under the funding set by the budget deal. It has proposed $524 billion in the base budget for the 2017 fiscal year and a separate overseas war fund of $59 billion.

McCain said the department claimed last year it was at the “lower ragged edge” of readiness under the current budget. But it is now cutting 24 Blackhawk helicopters, 50 F-35 Joint Strike Fighters, five Navy cruisers, and 77 Marine Corps Joint Light Tactical Vehicles, as well as trimming $1.3 billion in military construction and family housing.

“So now you’re satisfied with the level … it is hard for us to understand, general,” McCain said to the joint chiefs chairman.

Dunford said he believes the DOD made the right priorities for the coming year and spent as much as possible on the readiness of the services to fight — and that more funding might not net further immediate improvements in readiness.

“By no means have I said the resource level for the department as we look out over the next few years is adequate,” he said. “What I simply said was this year’s fiscal year 2017 budget is sufficient to meet the [national security] strategy.”

Carter put the difference in actual spending between the current budget and the 2017 proposal at $11 billion. The DOD was able to close some of the gap by changes in oil prices and other reductions in expenses.

He said the department mainly put off investments in newer aircraft such as the F-35, which has become among the most expensive development projects in history, and shipbuilding, but did not terminate any major programs or any multi-year defense contracts.

Carter said the scuttling of the agreement could lead back to sequestration, a $100-billion series of defense cuts over the coming years that were passed in 2011 under the Budget Control Act. There is a near consensus in Washington that the sequester would be deeply damaging to the military but it remains set to kick back in without further action by Congress.

Still, there is a growing chorus of Republican hawks pressing for increases to the defense budget — increases that opponents contend violate the agreement — amid growing concerns over global security. Rep. Mac Thornberry, R-Texas, and dozens of members of the House Armed Services Committee are also pushing for the $18-billion addition to the defense budget.

On Thursday, Sen. James Inhofe, R-Okla., said “People are going to have to wake up” about the dire state of the military and ticked off a number of overseas developments that have become mainstays at defense hearings on Capitol Hill — uncertainty in Afghanistan, a belligerent North Korea and a rising China.

“I contend we are in the most threatened condition we’ve ever been in as a nation,” Inhofe said. “I feel wistful for the days of the Cold War.”