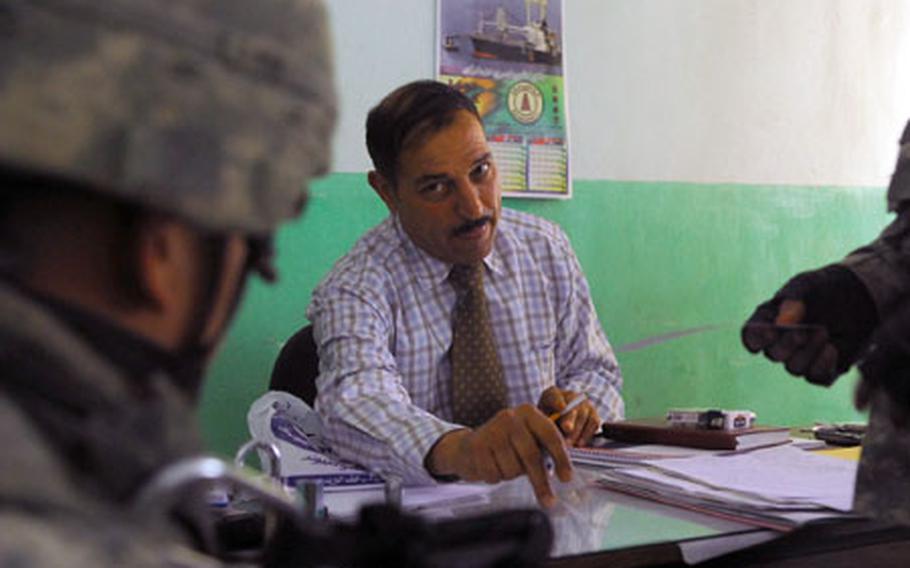 An apologetic headmaster of an Iraqi school pleads with a U.S. Army lieutenant and his Iraqi interpreter to stay for drinks after students threw stones at the lieutenant&#39;s patrol Sunday in the Baladiat neighborhood of East Baghdad. (Monte Morin / S&S)

An apologetic headmaster of an Iraqi school pleads with a U.S. Army lieutenant and his Iraqi interpreter to stay for drinks after students threw stones at the lieutenant&#39;s patrol Sunday in the Baladiat neighborhood of East Baghdad. (Monte Morin / S&S) 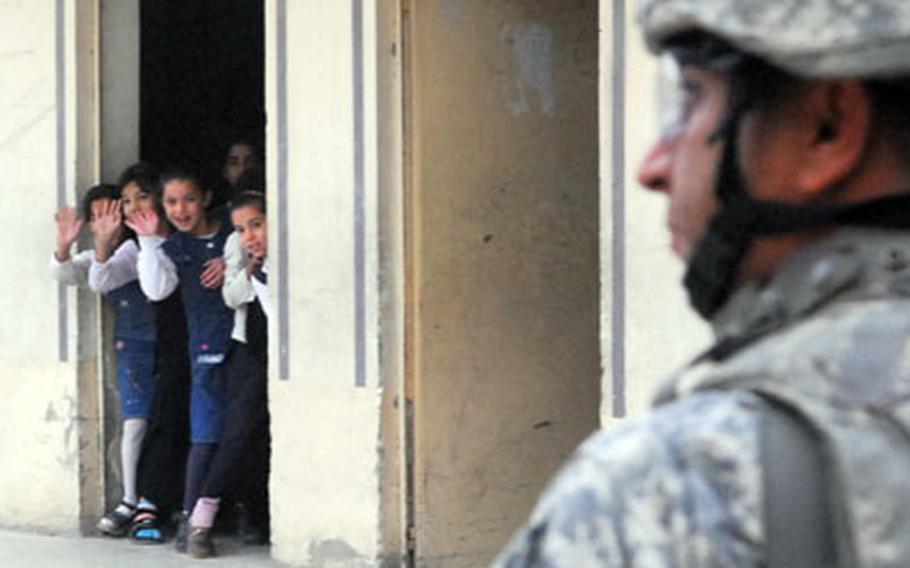 Iraqi school girls wave to soldiers from 1st Platoon, Company D, 1st Battalion, 8th Cavalry Regiment on Sunday. Troops spent much of the day scouting out schools in east Baghdad for potential renovation projects. (The school pictured was not the one where students threw stones at soldiers that day.) (Monte Morin / S&S) 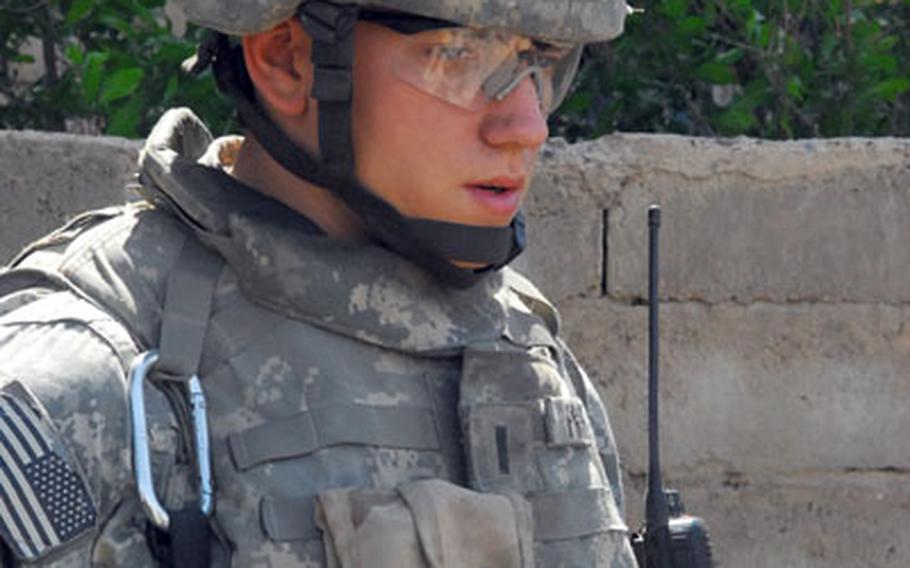 BAGHDAD -- First Lt. Peter Friend was in a generous mood.

The 25-year-old Durham, N.C., native was tooling through east Baghdad&#8217;s Baladiat neighborhood with a line of gun trucks Sunday, looking to dispense reconstruction aid at every school he could find.

&#8220;We&#8217;re the new unit in charge of this area,&#8221; Friend told one school principal after another. &#8220;This area has been very cooperative with coalition forces, and we want to reward that by contributing to the infrastructure.&#8221;

Like other platoon leaders in Company D, 1st Battalion, 8th Cavalry Regiment, Friend was ordered to come up with five aid projects in his sector &#8212; reconstruction jobs that would warm the hearts and wallets of local Iraqis. Schools were an obvious place to start in this overwhelmingly Shiite neighborhood on the outskirts of Sadr City.

The almost unanimous response that teachers gave Friend and other platoon leaders was that they really needed electricity, water and sewage. Gifts of computers would do no good unless they had the juice to run them, and the city supplied only 60 minutes of power every five hours. That was on a good day.

Friend and the other platoons pressed on though, promising to add new generators, classrooms, chalkboards, walls and windows to a collection of crowded, weather-worn school buildings.

But 2nd Platoon&#8217;s motorcade of generosity came to a sudden, tire-squealing halt Sunday when students at one school started lobbing stones at their Humvees.

The first fist-sized rock arced over the playground wall and bounced off the roof of the lead vehicle. Other missiles followed.

Although the armor on a seven-ton Humvee is more than a match for rocks, a well-placed stone could seriously injure &#8212; or at least ring the bell &#8212; of a turret gunner, who sits partially exposed in the gunner&#8217;s hatch.

None of the gunners was injured Sunday, but soldiers fumed over the hail of rocks. Part of this anger was historic. Roughly three months ago a militant fired a rocket-propelled grenade at the platoon and was thought to have escaped into the same school.

Friend&#8217;s men piled out of their Humvees and swarmed on the school. As a group of soldiers fanned out over the playground, Friend found the school&#8217;s headmaster, a middle-aged man with a comb-over and paunch.

The schoolmaster fired up a Miami cigarette and responded through an interpreter. &#8220;Sometimes they don&#8217;t know how to treat the freedom. I&#8217;m sorry,&#8221; he said with an anxious grin.

&#8220;The situation during the last few years makes the kids do bad things and the school can do nothing,&#8221; the headmaster said.

At this point, one of Friend&#8217;s men leaned through the doorway and spoke excitedly.

With the situation worsening, Friend ended the visit.

Friend was already out the door. Back in his Humvee, he shook his head.

Friend said that Sunday wasn&#8217;t the first time he and his men had been stoned, but it was the first time it happened in a relatively well-to-do neighborhood like Baladiat. Rock throwers were more common in poverty-stricken areas adjacent to the Mahdi Army stronghold of Sadr City.