The Operational Camouflage Pattern uniform has a "hook and loop" rank displayed in the middle of the chest. (Daniel Ter Haar/U.S. Air Force)

The Operational Camouflage Pattern uniform has a "hook and loop" rank displayed in the middle of the chest. (Daniel Ter Haar/U.S. Air Force) 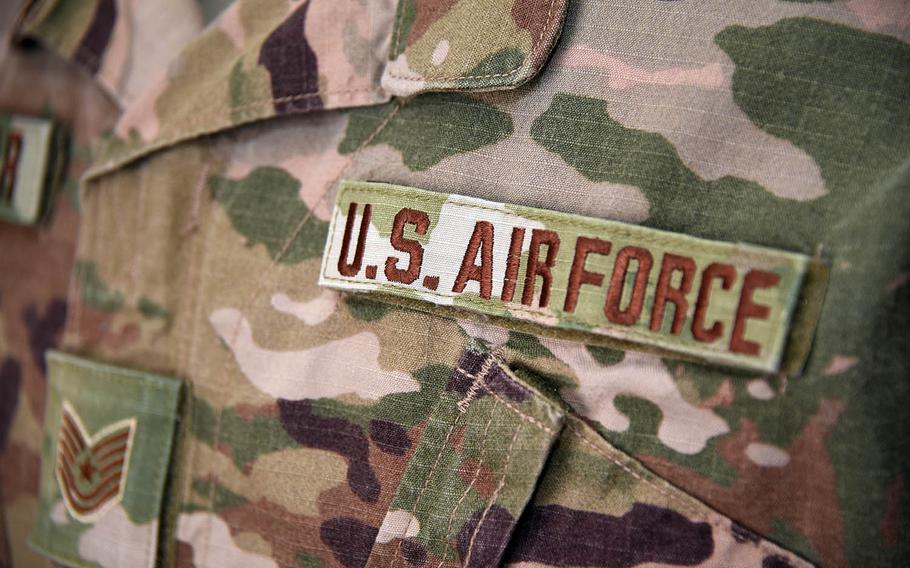 The Air Force is gearing up for its adoption of the Army’s Operational Camouflage Pattern uniform, which will be standard issue for airmen starting Oct. 1.

Already worn by some airmen overseas, the new OCPs will be optional until April 1, 2021, when the Airman Battle Uniform — the gray, blue and green tiger stiped pattern now in use — will be retired, the service said.

“We spoke to and listened to airmen on this, and the OCP was the clear choice,” Air Force Chief of Staff Gen. Dave Goldfein, said in a statement earlier this year. “The uniform works in all climates — from Minot [in North Dakota] to Manbij [in Syria] — and across the spectrum of missions we perform. It’s suitable for our airmen working on a flight line in the Northern Tier states and for those conducting patrols in the Middle East.”

However, airmen who plan to immediately switch uniforms may run into issues finding unit patches and badges that use the proper “spice brown” threads.

According to an Air Force instruction issued in July that outlines dress and appearance standards, OCPs can be worn in a basic configuration without patches until organizational patches and badges are developed or reconfigured with the new thread colors. Those are being developed by The Institute of Heraldry and the Air Force Historical Research Agency, according to a Sept. 11 statement on the service’s official website.

All Air Force heraldry will be examined to figure out the best way to convert the colors of the current emblems into a configuration meeting the OCP color scheme, the statement said.

The conversion process should begin on or around Oct. 1, James Mesco, a historian with the 50th Space Wing in Colorado, said in the statement. This process will take six to nine months, and approved patches will be released simultaneously.

T-shirts worn with OCPs must be desert sand or tan in color, the Air Force instruction said. Airmen must switch to the tan shirt by June 1, 2020.

Trousers may be bloused or tucked into the tops of boots, and socks may be desert sand, tan or DLA-green, the instruction said. Airmen must wear only DLA-issued green socks by June 1, 2020.

Airmen may wear tan or coyote brown boots with the new uniforms; however, they must switch to the coyote brown by June 1, 2020. Those working in industrial areas may continue to wear black combat boots.

Airmen’s clothing allowance will increase by nearly $20 this fall to help pay for the more expensive uniforms. The new boots will roughly match the price of the older sage green boots worn with ABUs.

Other guidance addressed in the Air Force instruction regarding OCPs says:

Women may wear the male version of the uniform. OCPs should not be starched or pressed, although light ironing is authorized. Alterations that impact the uniform’s functionality, such as sewing pockets closed, are not authorized. Airmen may sew on or use Velcro backing for name tapes or ranks but are not allowed to mix and match the two. Names tapes, enlisted ranks and all officer ranks will be spice brown except for first lieutenant and lieutenant colonel, which will be black. Occupation badges may be worn centered a half-inch above the U.S. Air Force tape using spice-brown embroidery on an OCP background. No more than two badges are allowed. A maximum of two patches may be worn on the right sleeve. One must be the U.S. flag in spice brown centered at the top of the Velcro. Below the flag, airmen may wear a higher headquarters patch. Unit commanders can also authorize airmen to wear U.S. Army patches earned in wartime service. A maximum of two patches may be worn on the left sleeve. When authorized by commanders, airmen with functional badges — Inspector General, Security Forces, Fire Fighter, Missile Operations, etc. — must center them at the top of the Velcro. Organizational unit patches should be worn centered at the top of the Velcro. Awarded joint qualification tabs — Army Ranger, Sapper, Air Commando, SERE, etc. — may be worn above the unit patch.bolinger.james@stripes.com Twitter: @bolingerj2004