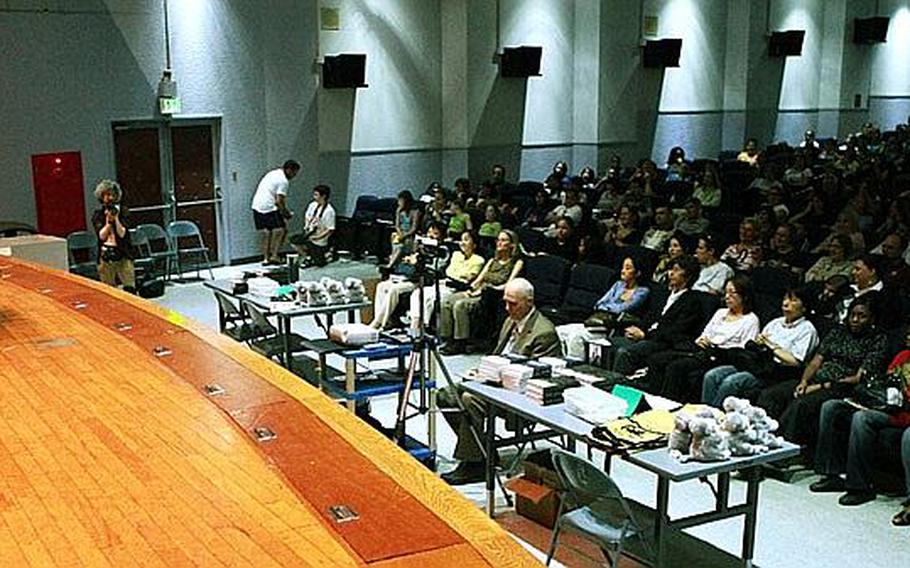 Buy Photo
Author and primatologist Jane Goodall speaks to residents Saturday at Yokota Air Base, Japan, during her visit with Yokota's Roots and Shoots Club. The base theater was packed as students, parents and admirers attended the special presentation to hear Goodall's message of conservation and environmental protection. (Grant Okubo/Stars and Stripes)

Buy Photo
Author and primatologist Jane Goodall speaks to residents Saturday at Yokota Air Base, Japan, during her visit with Yokota's Roots and Shoots Club. The base theater was packed as students, parents and admirers attended the special presentation to hear Goodall's message of conservation and environmental protection. (Grant Okubo/Stars and Stripes) 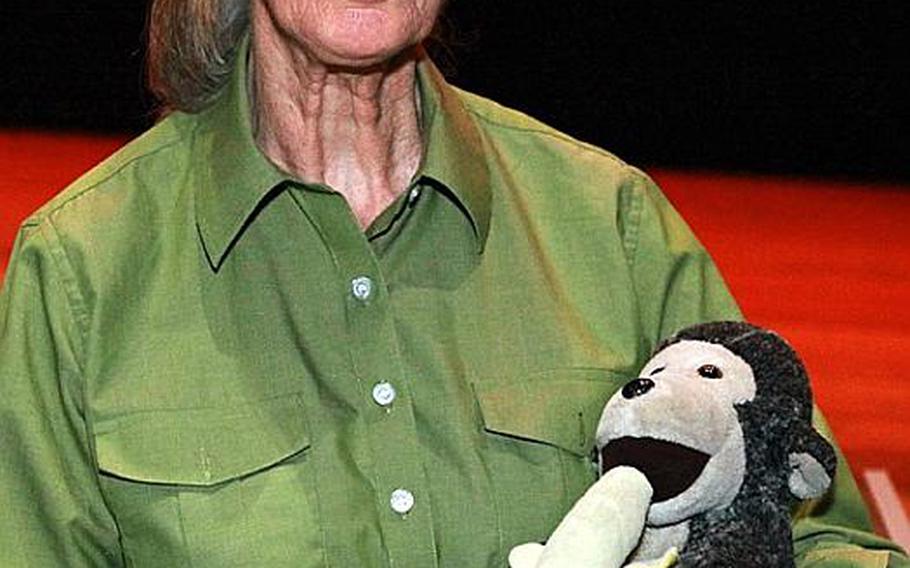 Buy Photo
Jane Goodall speaks to Yokota Air Base, Japan, residents Saturday at the base theater. Her stuffed toy is Mr. H, who accompanies her everywhere. Goodall said the original Mr. H was a 1996 birthday gift from her friend, former Marine Gary Haun, who lost his eyesight at 25. She said Haun's overcoming the challenges of blindness was an inspiration, and Mr. H helps spread that message. (Grant Okubo/Stars and Stripes) 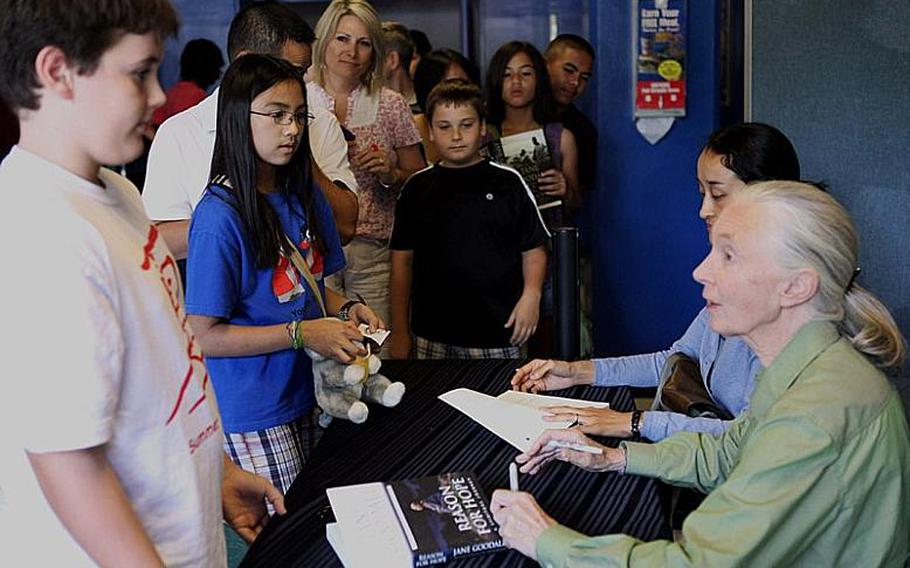 Buy Photo
Jane Goodall, right, signs a copy of her book for Christian Sonnenberg, left, 11, a Yokota Middle School student, during her visit Saturday to Yokota Air Base, Japan. (Grant Okubo/Stars and Stripes) 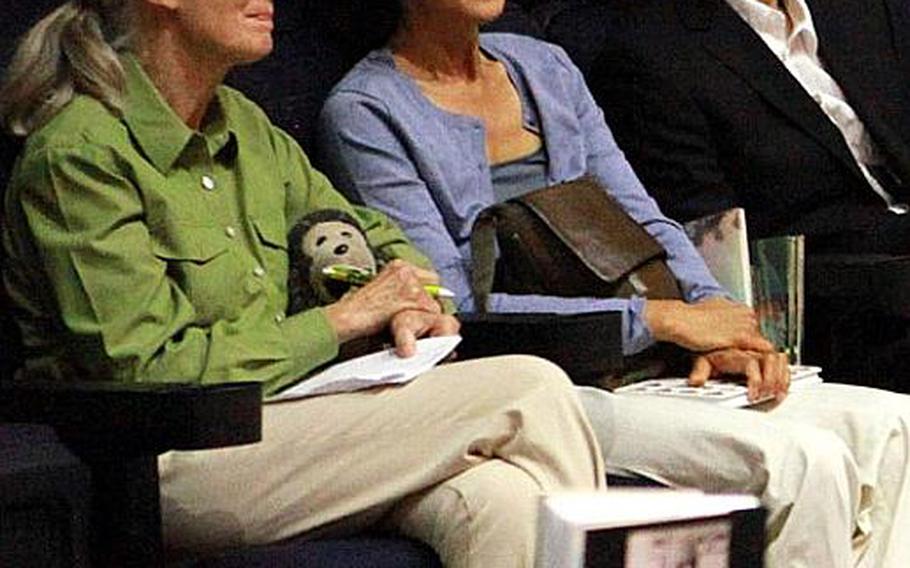 Buy Photo
Jane Goodall, left, listens to her introduction by the Roots and Shoots Club before the primatologist and conservationist spoke to residents at Yokota Air Base, Japan, on Saturday. Yokota's Roots and Shoots Club is a chapter of the worldwide youth organization founded by the nonprofit Jane Goodall Institute. (Grant Okubo/Stars and Stripes)

YOKOTA AIR BASE, Japan &mdash; Jane Goodall would never ambush a whaling ship or toss paint on a woman wearing fur to get her point across, she told a large audience at the base theater here Saturday.

It isn&rsquo;t that she believes in animal protection or staving off ecological destruction any less than some of her more radical counterparts.

To save the African apes that she has studied for decades, along with other animals and the environments they live in, conservationists must appeal to the hearts and intellects of the next generation of leaders, Goodall told the students, parents and admirers packed inside the theater.

&ldquo;There are times when I would love to be a militant, but it&rsquo;s so often counterproductive. We get labeled as terrorists,&rdquo; Goodall said in response to an audience question following her hourlong presentation on a range of environmental issues.

Goodall&rsquo;s visit came on the 50th anniversary of the beginning of her groundbreaking research into Africa&rsquo;s chimpanzees near the shores of Lake Tanganyika, in what is now Gombe Stream National Park, Tanzania.

Before her appearance Saturday, Goodall met with children of Yokota&rsquo;s Roots and Shoots Club, a chapter of a worldwide youth organization founded by the nonprofit Jane Goodall Institute.

The local chapter was started in 2006 by Yokota Middle School teacher Gary Niklason after he heard Goodall speak in Tokyo. The students have since organized recycling awareness campaigns and other projects.

&ldquo;At Yokota, the people here have been working for several years to make the group strong and active,&rdquo; Goodall said in an interview with Stars and Stripes. &ldquo;It was time I visited to encourage them.&rdquo;

Goodall said she travels 300 days a year promoting awareness of the world&rsquo;s primates, but she also discusses such problems as poverty and deforestation, which lie at the root of their dwindling numbers.

&ldquo;They all have their own personalities,&rdquo; Goodall said of the primates. &ldquo;You can distinguish between them just as you can human faces.&rdquo;

In 1960, Goodall arrived in Gombe and gradually learned about chimpanzee society. She saw chimpanzees using tools for food, listened to them talk and witnessed both great acts of altruism and even primitive wars.

In 1986, Goodall shifted from scientist to activist after attending a conference and seeing the evidence of widespread environmental destruction and cruelty to apes throughout Africa.

Now, Goodall&rsquo;s stature gains her audience with heads of state and business leaders to promote her causes. However, she said, it will all be for naught if today&rsquo;s children do not become better stewards of the planet than the people of her generation.

Some of Goodall&rsquo;s pleas might seem controversial on a military base. For example, she cautioned the audience to limit their beef intake because of the environmental effects of clearing jungle and diverting water to support cattle.

&ldquo;This is a meat-and-potatoes kind of place,&rdquo; said Tech. Sgt. Sergio Carrillo, of San Diego and assigned to the 374th Civil Engineering Squadron. &ldquo;But what she said really opened my eyes. It made a lot of sense.&rdquo;

Following her appearance Saturday, Goodall was scheduled to speak in Yokohama and Kyoto before moving on to cities throughout China and South Korea.