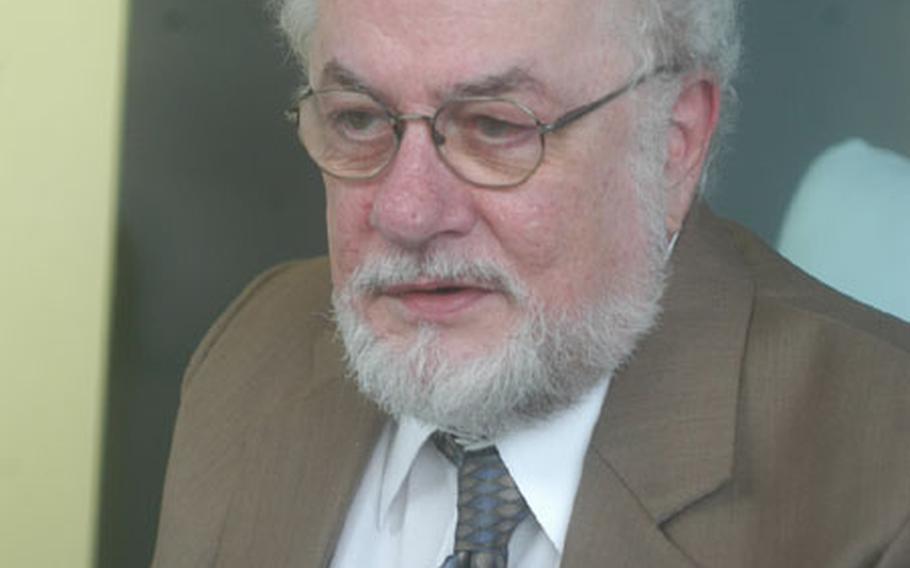 Adrian Cronauer was portrayed by Robin Williams in the movie "Good Morning, Vietnam." He is now a spokesman for the prisoners of war/missing in action issue. (Ron Jensen / S&S)

RAF MILDENHALL, England &#8212; Adrian Cronauer, who was portrayed by actor Robin Williams in the movie &#8220;Good Morning, Vietnam,&#8221; wants to get some things out of the way at the start.

&#8220;If I did half the things he did in that movie, I&#8217;d still be in Leavenworth and not England,&#8221; Cronauer said Monday morning before addressing a POW/MIA luncheon at RAF Mildenhall&#8217;s Galaxy Club.

The movie, which Cronauer co-authored, was based loosely on his experience as an Armed Forces Network disc jockey for one year in Vietnam while in the Air Force. But, as he said, it is a movie and Williams&#8217; manic performance was of a decidedly nonmilitary character.

He did leave a restaurant once shortly before a bomb exploded in it, but most of the other events in the movie are fiction.

Cronauer, 66, is now special assistant to the director of the prisoners of war/missing in action office in the Pentagon. In that capacity, he travels extensively, including several trips back to Vietnam, to raise awareness of the effort to account for America&#8217;s missing.

The movie made Cronauer a celebrity. He once was asked for an autograph by singer Bette Midler.

It grew from his attempt to sell a situation comedy to Hollywood based on his time in Vietnam. The top shows in 1979 were &#8220;M*A*S*H&#8221; and &#8220;WKRP in Cincinnati.&#8221; Put the Korean War comedy and the show about a Midwestern radio station together, he figured, and you had his Vietnam experience.

Williams learned of the idea and was intrigued enough to have a screenplay developed, earning an Oscar nomination for his performance.

Cronauer has used his celebrity status to promote causes in which he believes and to support Republican candidates for office. He campaigned for President Bush and was offered his current job in the Bush administration.

On Sept. 11, 2001, while the dust was settling from the terrorist attacks on the United States, Cronauer decided to accept the offer. His job description goes on for several pages.

He said the government makes a promise to everyone who serves in uniform that they will not be forgotten, whether they are captured or listed as missing in action. The motto of his office, he said, is &#8220;Keeping the promise.&#8221;

More than 2,000 people remain missing from the war in Vietnam.

His office, which is part of the Department of Defense, also ensures that the military has the equipment to help rescue downed pilots and others, preventing them from becoming another statistic.