Golf in Iceland: fraught with hazards 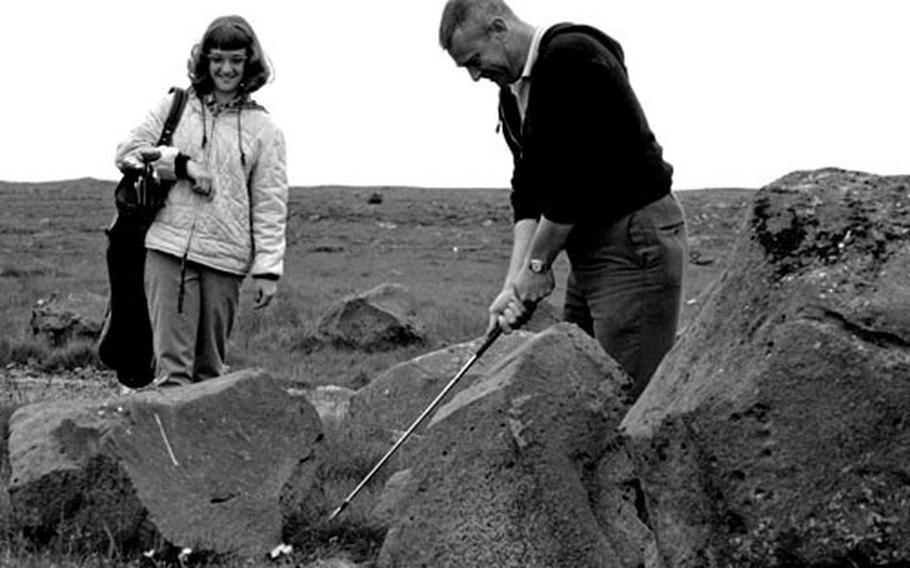 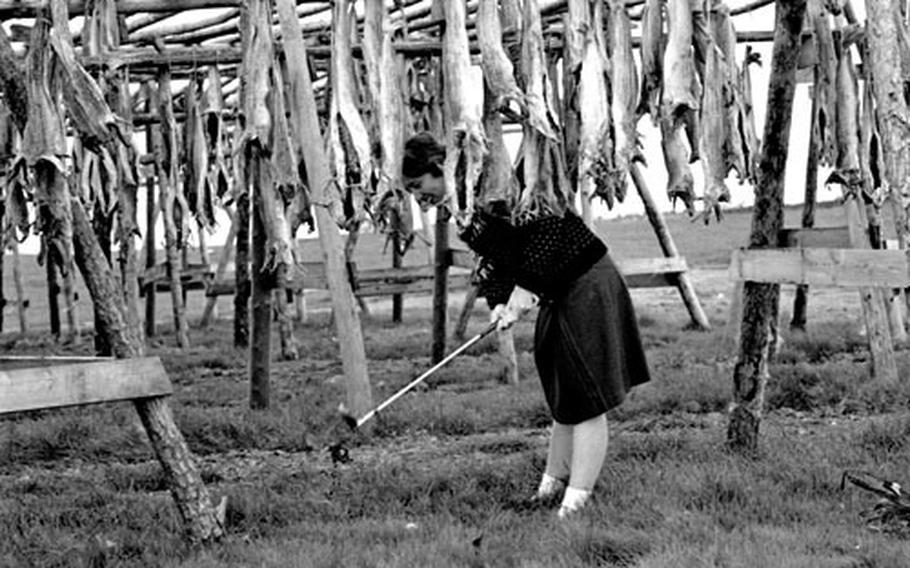 Buy Photo
A golfer at the Shagrila course in Iceland takes a shot from the fish hazard. (Merle Hunter/Stars and Stripes) 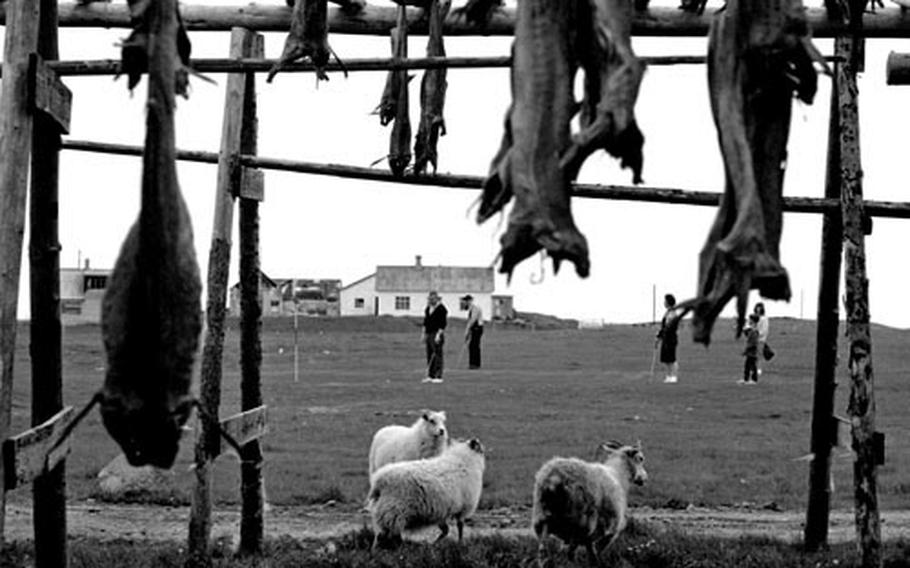 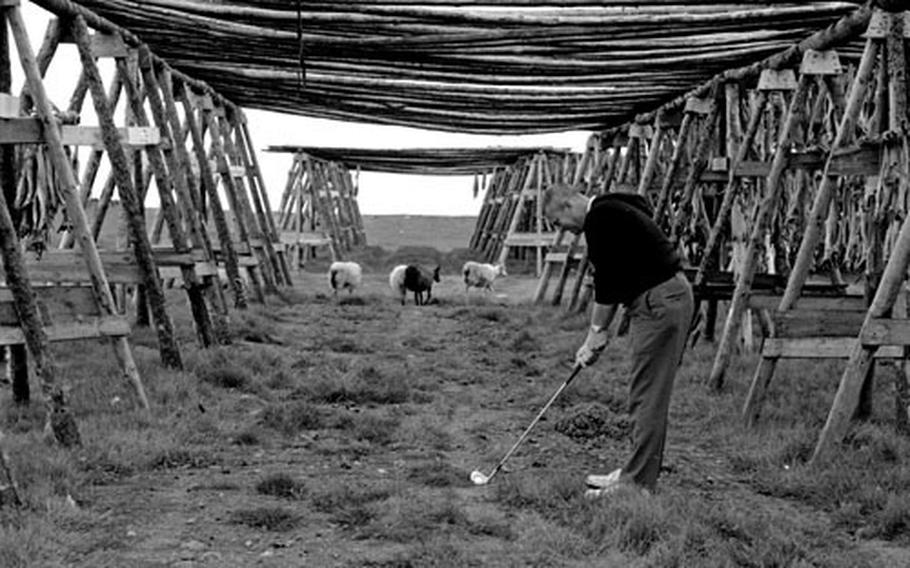 Buy Photo
CPO John E. Emert finds himself in the middle of the fish rack. (Merle Hunter/Stars and Stripes) 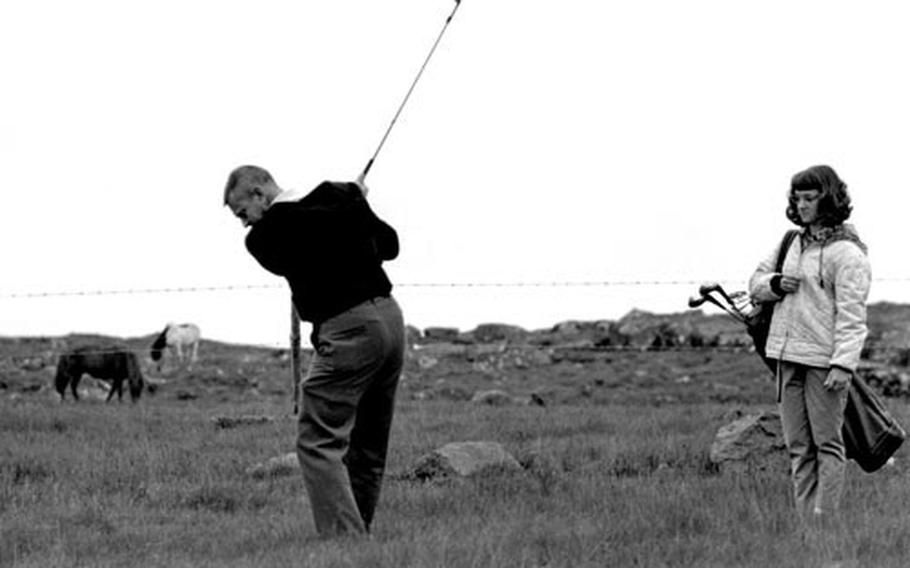 Buy Photo
When the grass was cut at the Shangrila course, it was because the horses and sheep were hungry. (Merle Hunter/Stars and Stripes)

THERE ARE no sandtraps in Shangrila, but par is about as elusive as it is in Pinehurst. If this strikes you as dogma, then you should consult those hardy sportsmen who have sampled the snares and the gremlins which haunt the U.S. Navy's notorious nine holes in Iceland.

For two years they have been testing their mettle and their sense of humor on the rock-bound layout by the sea.

Named for James Hilton's mythical heaven, it would seem that Shangrila should, feature arrow-straight fairways and magnetic greens.

But alas, this isn't the case.

CARVED FROM a lava-strewn cow pasture, nine miles from the U.S. Naval station at Keflavik, Shangrila is fraught with hazards that would fluster an Arnold Palmer.

Cattle and sheep wander the fairways. Birds consider a water hazard their private sanctuary and during the nesting season dive-bomb intruders.

A fish rack (containing thousands of odoriferous carcasses) looms in front of the tee at the seventh hole, the only par five at Shangrila.

Golfers who fail to clear this barrier find themselves, with bated breath, flailing away among the fish.

Balls ricochet from fairway boulders — and often are lost in the tall grass in the porous pasture.

Horses, frolicking in a nearby field, watch the parade of bogeys and double-bogeys with apparent indifference.

Greens are hard and not much bigger than the bathroom floor.

Southern boundary of the course is the Atlantic, where ships and fish ply off shore within sight of the golfers. A tapered stone wall protects Shangrila from the crashing sea.

Sliced drives on this frontage may wind up in the drink — amidst the capering mallards and the muck of low tide.

SHANGRILA came into being two years ago when a Navy enthusiast discovered that the pasture was conveniently situated from the base.

The farmer who owns the ground agreed to rent it on an annual basis for use as a golf course.

Although rough by accepted golfing standards, Shangrila offers Americans the challenge they need to hone up for matches with the Icelanders, who have become adept golfers and have built several challenging courses of their own.

"We had our inaugural of Shangrila May 15, 1965," said CPO Norman R. Martin, one of the prime-movers in the project, along with Special Services officer Jack Brink, who was killed in a helicopter crash a week before the opening.

"A survey of the pasture revealed the best spots for the greens. Then we just clipped the grass and installed the cups and the flags. That was it. The cows and the sheep do the cutting for us on the fairways. We have taken on a groundskeeper for the greens this year," Martin said.

A PAR-33 circuit, Shangrila is deceptively tough, even for the most skilled golfers at Keflavik.

"You know it's short. You know there are no traps. But then there are the fish racks, the cows and the birds. These are mental barriers and golf is a mental game," said one Shangrila regular who has been chasing par for two seasons.

"And the winds here can really play havoc with the long game and the high iron shots."

TO DATE five tournaments have been played at Shangrila. With a break in the weather (if it doesn't snow too late or too early), the course can be played from May through September.

A special inducement to golf in Iceland is the midnight sun. An Icelandic-American tournament this summer on the Reykjavik Golf Course was concluded at 1:45 a.m.

Sometimes on summer weekends people literally play through the night at Shangrila.