Gold for all: Navy ending use of red ‘misconduct’ uniform stripes 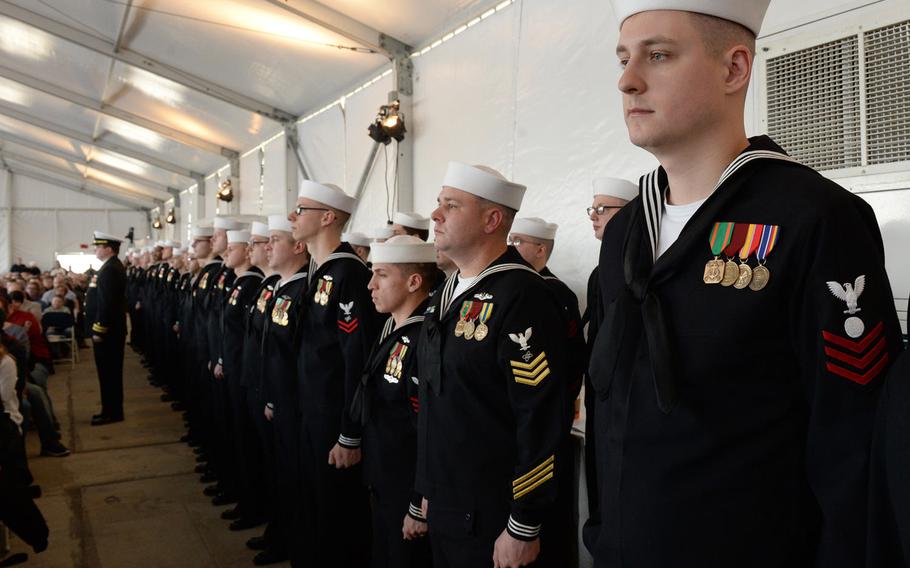 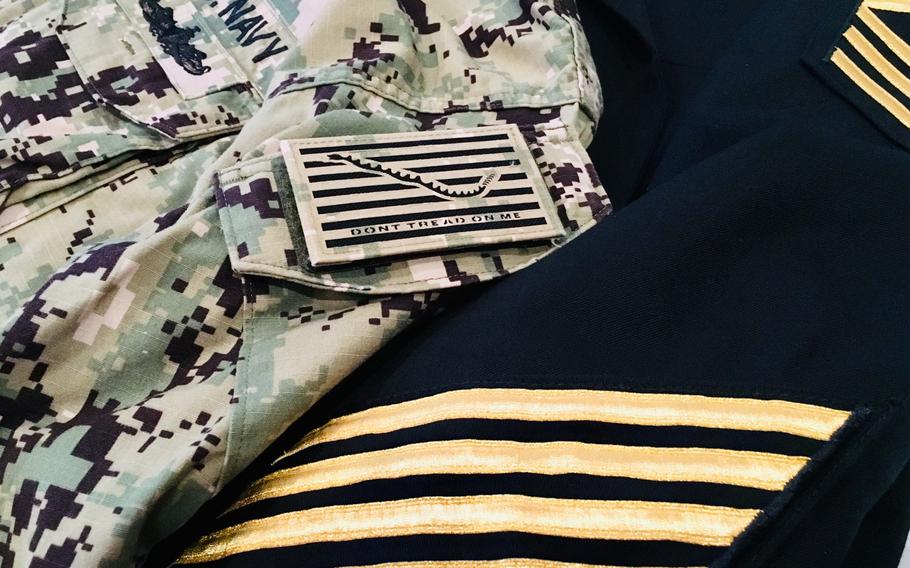 The Navy released a new uniform policy update. Dress and service uniform gold chevrons for 12-year sailors and the long-awaited type III uniform command patches are among the list. (Joshua Karsten/Stars and Stripes)

MANAMA, Bahrain — The Navy is doing away with “misconduct” red stripes for senior sailors, among other changes outlined in a new uniform policy released Monday.

The 13 changes are a result of feedback received from the fleet, according to the message signed by Chief of Naval Personnel Vice Adm. Robert Burke.

Starting June 1, all sailors over the 12-year service mark will be authorized to wear gold chevrons on their dress and service uniforms, a stark contrast to the red stripe worn by some senior enlisted sailors as a visible sign of misconduct from some point in their careers.

The current policy mandates that sailors who have received nonjudicial punishment or court-martials within the past 12 years wear red stripes. Sailors who already have reached the milestone had to restart the 12-year clock if they had further infractions. Each stripe represents four years of service, with the gold previously indicating good conduct.

While multiple enlisted sailors welcomed removal of the stigma associated with red stripes, others online cried foul on the CNP Facebook page, viewing their gold stripes as a badge of honor.

“Gold stripes mean something,” one user commented. “Some traditions are worth keeping, this was one of them,” another said.

“It says you did the right things for over a decade and it was reflected on your uniform,” Chief Petty Officer Steve Owsley, who has gold stripes and has been in the Navy just shy of 20 years, told Stars and Stripes. “Many times, when servicemembers make a mistake in the Navy, the most important part is to own that mistake and accept responsibility for it.”

Another change is the authorization of the command patch to replace the left-shoulder “Don’t Tread On Me” patch, currently a standard across the fleet since the Navy transitioned to the Type III green digital camouflage uniform in 2016.

Although the command patches will be considered optional, sailors have pushed for this change as a source of pride and distinction between commands.

“I think the option for sailors to wear command or unit patches is a great, new change,” said Petty Officer 3rd Class Tristan Collop, currently serving in Bahrain. “It allows commands to wear their unit pride on their sleeves, literally.”

The design of a command logo patch must be approved by the unit’s commanding officer, the message said.

Meanwhile, the all-too common occurrence of E-4 sailors receiving salutes now has a potential remedy. Navy captains will have the option to purchase silver-thread O-6 rank insignias for the Type III uniform to distinguish them from 3rd class crows, which have a strong resemblance to the black O-6 eagle when seen at a distance.

Other items will affect female uniforms, including new slacks and skirts for chiefs and officers, flat shoes for dress uniforms and a clarification on the use of ponytails, previously ambiguous for both style and use in uniform. The message also introduced an optional-wear T-shirt for nursing sailors.

Other updates include information on mandatory sea bag items. The full message can be found at https://www.public.navy.mil.