Going the extra miles to help a wounded Marine 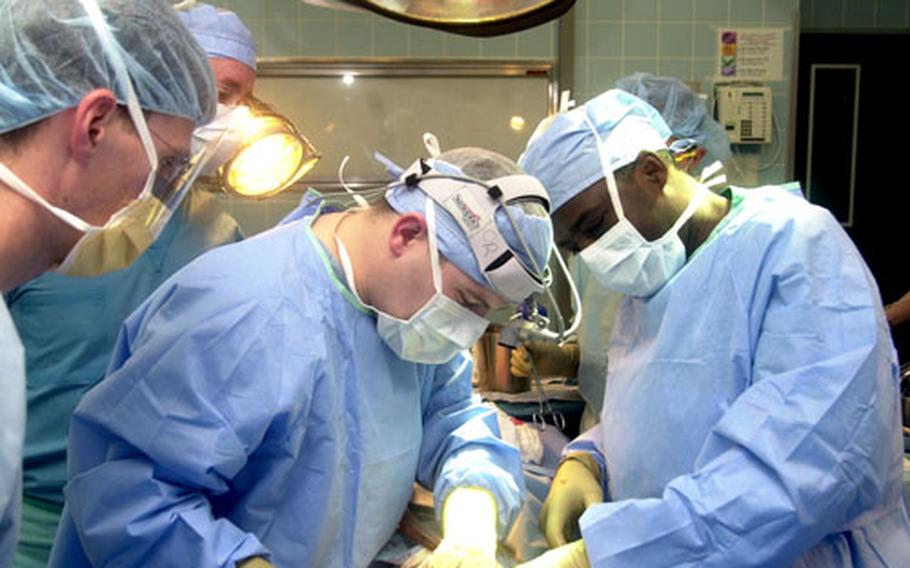 Doctors, nurses and staff at Landstuhl Regional Medical Center in Germany work Friday to save the life of a Marine severely wounded Monday in a roadside bomb explosion in Iraq. A five-member team from Landstuhl flew to Iraq to treat and transport the patient, who has burns over 60 percent of his body in addition to massive internal injuries. (Warren Dorlac / U.S. Air Force)

LANDSTUHL, Germany &#8212; One of the Few, the Proud has a faithful corps doing everything it can to keep him alive.

This corps is composed of dozens of troops from across the military who are going to great lengths for a wounded Marine who has sacrificed so much.

The young man bears burns over 60 percent of his body and has massive internal injuries as a result of a roadside bomb blast May 1 near Fallujah, Iraq. He has severe damage to his left lung in addition to kidney and liver injuries. Given his condition, this Marine &#8212; who will remain nameless because of patient privacy laws &#8212; could indeed make the ultimate sacrifice.

If not for the tireless work of military doctors, nurses, pilots, aircrews, operations officers and countless others from San Antonio, Qatar and points in between, he would not have likely made it this far.

Sandstorm and mortarsAround 7 a.m. Tuesday, doctors at Landstuhl&#8217;s intensive care unit received a call from downrange, requesting the hospital&#8217;s specialized team that deals with the treatment of severe lung injuries.

&#8220;He was requiring high levels of ventilatory support, and they couldn&#8217;t do the needed further surgeries on him,&#8221; said Navy Dr. (Cmdr.) Peter Marco, a pulmonary medicine and critical care physician at Landstuhl. &#8220;They needed to get him out of theater as fast as possible.&#8221;

The plane was scheduled to go to Kuwait, but thanks to quick work by the Tanker Airlift Control Center at Scott Air Force Base, Ill., it flew to Balad first for the Landstuhl team&#8217;s mission.

The flight was first delayed getting into Balad because of a dust storm. Its second delay was something more sinister.

&#8220;Flying into this combat zone, we get waved off twice,&#8221; Dorlac said. &#8220;The base came under mortar attack as we were on our final approach. We got diverted around. It&#8217;s a good thing we had the dust storm because if not, we would have been on the ground when the mortar attack happened.&#8221;

Into BaghdadOnce at Balad, the team had to get to the 10th Combat Support Hospital in Baghdad&#8217;s Green Zone. Members arranged flights via Black Hawk helicopters and set about finally seeing the wounded Marine they had traveled thousands of miles to treat.

The team evaluated the Marine, talked to his physicians and devised a plan to care for him. Doctors had to get the Marine off the hospital&#8217;s ventilator &#8212; a device that helps the patient breathe &#8212; and hook him up to a special ventilator the team had brought for the patient&#8217;s transport.

Prior to the helicopter flight to Balad, it was decided that the Marine needed another surgery to improve his stability for the journey. Following the surgery, the Marine was loaded on the Black Hawk and flown to Balad.

Given the patient&#8217;s condition, urgency and a limited supply of oxygen during transport, the helicopter was allowed to perform the nonstandard procedure of landing behind the C-17 for a &#8220;tail-to-tail&#8221; transfer of the Marine.

The C-17 bound for Ramstein left Balad early Wednesday morning, and the Marine did &#8220;very well&#8221; during the flight, doctors said. Once at Ramstein, an ambulance transported the young Devil Dog from the runway to the emergency room at Landstuhl.

At LandstuhlWhen the Marine arrived he was in stable condition. It happened to be his birthday. Chest X-rays and CAT scans were taken. Then the young man was sent to the operating room where doctors worked on his burns, explored his abdomen, inserted a feeding tube and checked his left lung. He also had injuries to his liver, kidneys and spine.

Dorlac talked to the Marine&#8217;s parents before and after operating.

He also experienced poor kidney function and has since become the first recipient of kidney dialysis at Landstuhl. A dialysis team from Walter Reed arrived at Landstuhl to treat the Marine.

Also a burn team from Brooke was on hand to treat the patient&#8217;s scorched skin. The six-member team is the only critical care air transport burn team in the Department of Defense.

It is a privilege that the team is given the responsibility to work with such patients, said Army Capt. Mario Rivera, chief flight critical care nurse with the Brooke burn team.

Through their trip to Iraq and back, several of the doctors worked with very little sleep.

Downplaying their own efforts, Dorlac, Marco and Fang said they just want the best for this Marine and all their patients.

While standard Critical Care Air Transport Teams have transport ventilators, the ventilators lack some functions that could be necessary for patients with more severe lung injuries, according to Landstuhl literature. That meant some patients had to stay in the theater for an additional length of time until they could be moved on standard ventilation. With the creation of the specialized team at Landstuhl Regional Medical Center in Germany and its extra equipment and expertise, patients suffering severe lung injuries could be transported out of theater earlier.

In roughly the last year and a half, the team has traveled downrange six times to treat patients. The missions would not be successful without help from a variety of military personnel.

Dorlac included the following groups with credit in assisting the mission: