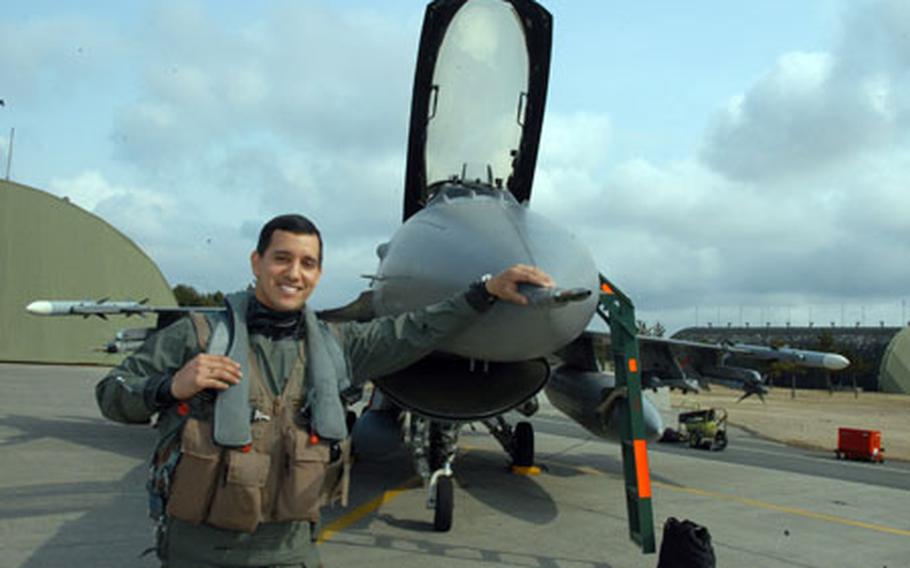 Capt. Alfred Rosales, an F-16 pilot with the 13th Fighter Squadron, stands in front of his jet prior to a recent training mission at Misawa Air Base, Japan. The squadron will replace Misawa’s 14th Fighter Squadron at Balad Air Base, Iraq, next month. (Jennifer H. Svan / S&S)

Capt. Alfred Rosales, an F-16 pilot with the 13th Fighter Squadron, stands in front of his jet prior to a recent training mission at Misawa Air Base, Japan. The squadron will replace Misawa’s 14th Fighter Squadron at Balad Air Base, Iraq, next month. (Jennifer H. Svan / S&S) 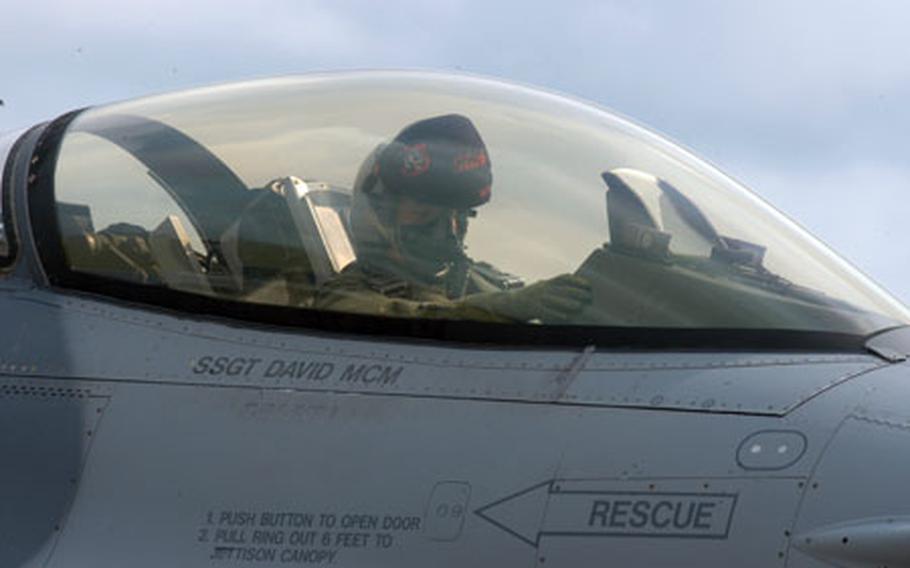 Rosales sits in the cockpit of his jet while getting ready for a recent training mission at Misawa Air Base, Japan. Rosales said he’s looking forward to “getting out to support the troops on the ground” and “making sure we’re doing the right thing out there.” (Jennifer H. Svan / S&S)

Being second has its benefits.

As the 13th Fighter Squadron heads into its final weeks of training before deploying to Iraq, its pilots are tailoring their flying drills to lessons learned from the squadron that went first.

The 13th will replace Misawa&#8217;s other F-16 fighter squadron, the 14th, at Balad Air Base north of Baghdad this month.

In Iraq, the 13th will assume the same role as the 14th, which since January has been providing close-air support to U.S. and coalition troops on the ground.

The 13th perhaps has no better teacher than the 14th.

The squadrons&#8217; pilots maintain almost daily contact with one another, exchanging after-action reports from the 14th&#8217;s combat sorties and video footage from the bomb-wielding downrange jets.

In Iraq, the 13th&#8217;s pilots could be tasked to provide top cover to coalition troops by perhaps looking for snipers on a rooftop or anybody approaching that could be an ambush, Morton said. &#8220;And being ready with air power, as well, if something goes wrong,&#8221; he said.

The lower the pilots fly, the more intense the threat, which in Iraq, comes mostly from shoulder-mounted weapons and small-arms fire, such as machine guns.

If he misses, soldiers on the ground could die, he said, and if he focuses too much on the attack and ignores his safety parameters, he could get hurt.

While the pilots say they feel prepared for the job that lies ahead, training has its limitations.