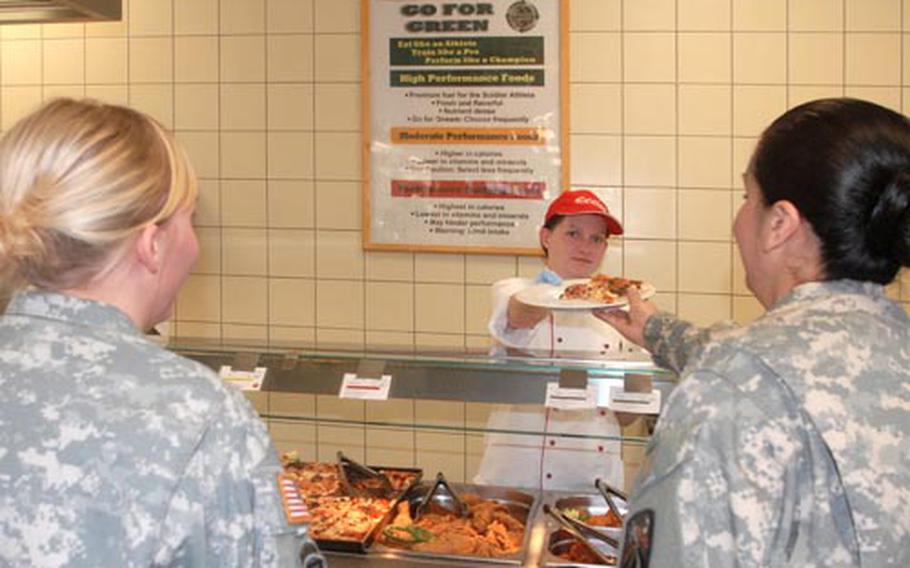 Go For Green, a new menu labeling system which rates foods based on how they affect a diner’s physical performance, is set to be in place at Army dining facilities worldwide by next year. (Seth Robson / S&S)

Go For Green, a new menu labeling system which rates foods based on how they affect a diner’s physical performance, is set to be in place at Army dining facilities worldwide by next year. (Seth Robson / S&S) 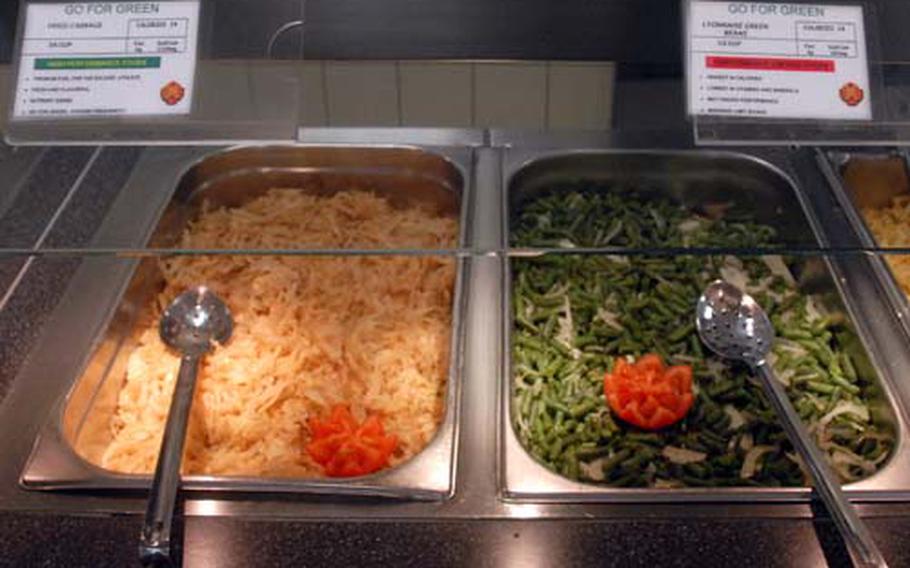 GRAFENW&#214;HR, Germany &#8212; Starting next year, the Army will use a "traffic light" system of food labeling in its dining facilities to help soldiers choose foods that enhance their physical performance, rather than slow them down.

Lt. Col. Dianne Helinski, nutrition adviser for the Army Food Program at Fort Lee, Va., said that the Army will roll out the program, known as Go For Green, at dining facilities worldwide next year.

Go For Green, based on guidelines developed at Fort Benning, Ga., in 2007, is already used at some DFACs, including several associated with Army medical facilities, she said.

The Army hopes that highlighting foods that will help the "soldier athlete" will influence their meal choices.

"We are trying to get away from the word &#8216;healthy&#8217; because it doesn&#8217;t appeal to young males but performance nutrition does," Helinski said.

"We have to educate the war-fighters at the point of sale about which foods will enhance their performance," she said.

Rather than overload people with information about the number of calories, fat grams, and carbohydrates in each item, the Army has decided to give soldiers a simple green, amber or red choice, she said.

"The goal is to encourage them to choose more green items and eat yellow and red only on an occasional basis," she said.

The Army is developing marketing material such as brochures and posters that will be distributed to the Army&#8217;s 300 DFACs worldwide to promote the program, she said.

A challenge for the program is developing a method for analyzing recipes locally, since different ingredients can change a food&#8217;s rating from "green" to "red," Helinski said.

The standards for rating foods, green, amber or red, are based on fat content and complex carbohydrates, she said.

"We want portions to be lean," she said. "We want the fats to be more Omega 3, which are the healthy fats and we want them to be unsaturated which means steering patrons away from animal fats."

Omega 3 fats, which are found in cold-water fish like halibut and salmon and in flax seed and canola oil but are lacking in many foods produced using industrial farming methods, have been shown to have many health benefits, Helinski said.

"These are things that are of interest to the Army right now. Americans aren&#8217;t getting enough Omega 3s. We are trying to figure out how to boost Omega 3s in the Army food system," she said.

The Go For Green program is already in place at Grafenw&#246;hr Training Area&#8217;s DFACs.

Renetta Jackson, food service operations specialist for U.S. Army Garrison Grafenw&#246;hr, said she tested the program at the CSM Hickey DFAC in April and brought it to other DFACs in the garrison in July.

Jackson said there had been nutritional information about carbohydrates, fats and proteins on labels at DFACs since the 1980s but that Go For Green makes it easy for soldiers to choose healthy items.

"If soldiers cut carbs they will feel tired. Carbs are what fuel the body if you are exercising for less than 60 minutes," she said.

Soldiers eating breakfast at the Grafenw&#246;hr DFAC last week glanced at the traffic light labels but many lined up for red items such as sausages and bacon.

He conceded that the bacon (which had a red label) was not the healthiest breakfast choice but said he planned to eat a healthy lunch.

"I normally get a sandwich and an apple at lunch. I don&#8217;t come back here and get more greasy food like a hamburger," he said.

Another patron, Lt. Col. Ivan Mikolic, 39, of Trumbull, Conn., had three glasses of skim milk, two glasses of orange juice, two boiled eggs and a plate of grapes on his tray as he prepared to fill another bowl with cereal while considering whether to add a banana and yogurt.

Mikolic said he doesn&#8217;t eat any of the meat served at breakfast in the DFAC because it is high in fat and sodium.

"I do pay attention [to the Go For Green labels]," he said. "I think they work if they are set up properly and in the right place and if soldiers are educated to look for them."

Helinski said the red items are on the menu as comfort foods.

"These are important, especially during deployments," she said. "We don&#8217;t want to restrict. We want to encourage."