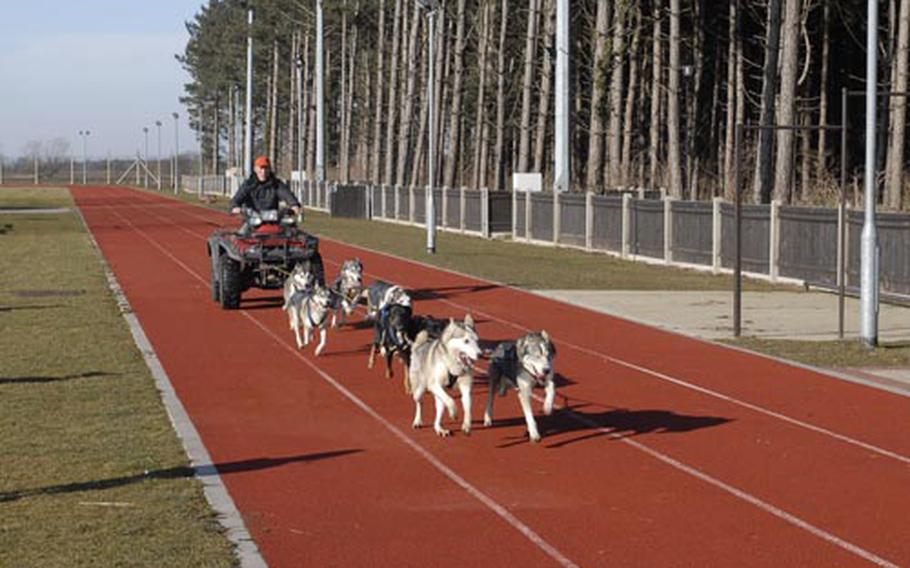 Fred Palmer shows off his dogsledding Siberian Huskies and Alaskan Huskies. The Palmers dogsled competitively and took the time to show people at RAF Mildenhall how it is done. (Mark Abramson / S&S)

Fred Palmer shows off his dogsledding Siberian Huskies and Alaskan Huskies. The Palmers dogsled competitively and took the time to show people at RAF Mildenhall how it is done. (Mark Abramson / S&S) Siberian Huskies bred for dogsledding take a break from towing their owners, Fred and Amanda Palmer, around the track and a field at RAF Lakenheath. The dogs can tow sledders at speeds greater than 20 mph. (Mark Abramson / S&S) Amanda Palmer gets towed by some of her dogs through a field at RAF Mildenhall. Palmer and her husband, Fred Palmer, gave people lessons in dog sledding in an Outdoor Recreation sponsored event. Outdoor Recreation officials hope to build up enough interest in dogsledding for a trip to Scotland next winter to let people dog sled in the snow. (Mark Abramson / S&S)

RAF MILDENHALL - The snow might not have been accumulating in massive billowy drifts, but it didn&#8217;t matter to the mushers who recently came out here to get a better look at the burgeoning British dog sled scene.

Put on by the Outdoor Recreation department, the event gave curious attendees a chance to learn about British dog mushing, and how the sport exists without any snow on the ground. Here&#8217;s a hint: The dogs basically pull a wheeled cart and the operator has hand brakes at his or her disposal.

Still, despite the lack of snow, dog sledding is emerging here as a great way for folks to do something different with their dogs, according to Keats McLaughlin, Outdoor Rec&#8217;s adventure programmer.

Depending on the class of dog sledding, folks can partake with as few as one or two dogs, according to Fred Palmer, a British dog sledding enthusiast who led the Mildenhall event.

Palmer and his wife own 31 dogs and have been into the sport for 20 years.

"Once you get one dog, then you get two and you start to do something with them that&#8217;s more than just taking them on a walk," he said.

Palmer attributes the growing popularity of dog sledding in the U.K. to more television coverage of dog sledding competitions and movies that bring the sport into the public light.

While the season is now slowing down, McLaughlin said Outdoor Rec will likely host future events next winter.

He initially got into dog sledding while living in Alaska.

"We want to try to do this every so often, because it&#8217;s interesting and people like to see the dogs," he said.

For those interested in dog sledding, Palmer suggested going to some events and shows and learning about the dogs, usually a husky or mixed breed.

If you&#8217;re going to get one, you should get two because the dogs are a bit hyper and can distract each other, he said.

"They just cannot be let off the lead," Palmer said. "They need to be doing something all the time."

McLaughlin said he&#8217;d like to organize a dog mushing trip to Scotland next winter if there&#8217;s snow to be had.

Ieisha Casiano, a civilian employee at Lakenheath&#8217;s 48th Medical Group, said she enjoyed being pulled by the dogs at the event.