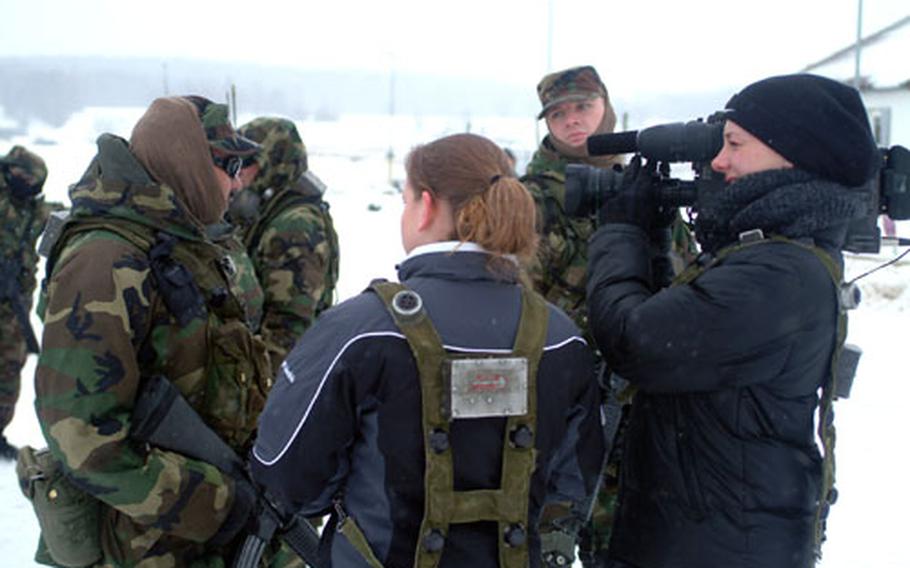 HOHENFELS, Germany &#8212; Whenever Americans dressed as Kosovo citizens stage a mock riot in a fake town in southeast Germany, Global News Network is there to pretend to cover the story.

If &#8220;Iraqi&#8221; rebels attack a U.S. military patrol in a snowy village in Bavaria, GNN turns out live updates, broadcast to no one.

For the resident news crew of the Hohenfels Combat Maneuver Training Center, the task of playing the role of the U.S. media in reality-based training scenarios is pretty simple: The reporters know everything that&#8217;s going to happen three days ahead of time.

But to perform their function as Hohenfels&#8217; tool to tutor soldiers on how to interact with civilian media while on a mission, the eight-person news team strives to be just like a network news team.

When training rotations are in full swing at the center, members of the Vipers &#8212; visual information personnel &#8212; team dress in civilian clothes, pick up real, broadcast-quality cameras and microphones and go to the scene of the day&#8217;s events to interview soldiers and collect video footage.

When they get back to their studio, the team has just four hours to put together a one-minute news package of the day&#8217;s story, plus a radio broadcast of the same event, Rawlinson said.

Though the news is never broadcast outside the Hohenfels training staff, the short stories are used in the reviews of the training rotations to let commanders see how troops interacted with the media, and how the unit&#8217;s actions were depicted in &#8220;the news,&#8221; Rawlinson said.

&#8220;It&#8217;s a valuable tool to teach [troops] how to handle and conduct themselves,&#8221; said Maj. Michael Wunn, commander of the 135th Public Affairs Detachment, who just spent a week fielding questions from GNN while in training for a mission to Kosovo.

Sgt. Brien Vorhees, who has been with the faux news network since it began operations two years ago, said crew members also try to replicate the attitude of typical American journalists by being persistent, but not acting overly aggressive or antagonistic.

In that respect, the GNN reporters aren&#8217;t shy about getting close to what can be, even in the training scenarios, events that become borderline violent.

Vascimini recounted a recent incident in which he got caught in a mock uprising of Greek civilians played by members of Hohenfels&#8217; resident opposition force, the 1st Battalion, 4th Infantry Regiment, while he was holding a $15,000 camera. The crowd tried to break through a line of riot police.

Sometimes, Vorhees said, the reporters are forced to cover their own deaths. &#8220;Killed&#8221; in the crossfire, caught in a bombing or, at least on one occasion, done in by a chemical attack, GNN journalists occasionally become battlefield causalities.

But that doesn&#8217;t let them off the hook, Vorhees said &#8212; the reporters still have only four hours to report the circumstances of their own demise.