GLS interpreters in Iraq threaten to strike over pay cuts 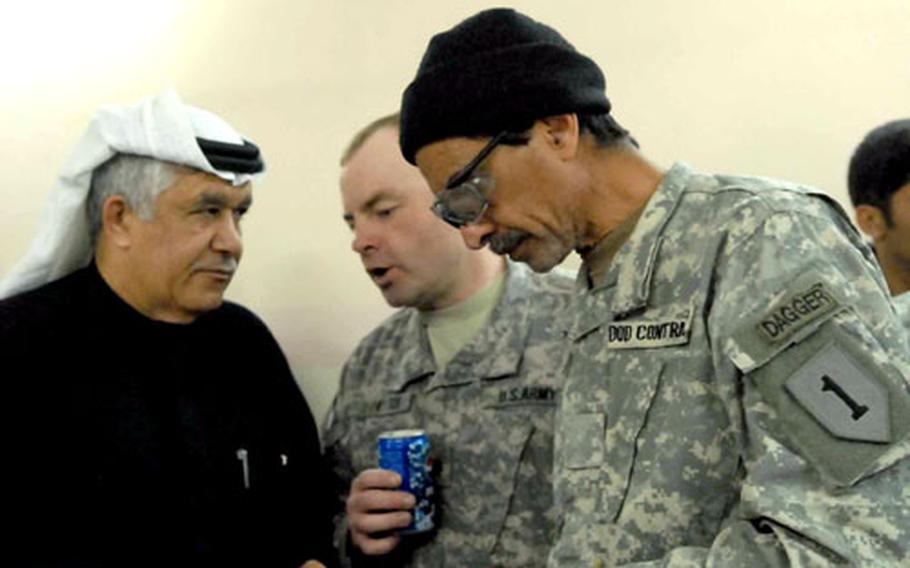 BAGHDAD &#8211; U.S. interpreters in Iraq are threatening to strike over pay cuts that their employer, Global Linguist Solutions, is imposing because of changes to a contract it signed with the U.S. Army Intelligence and Security Command.

The company is requiring its interpreters to sign modifications to their contracts that would cut their pay starting Feb. 27. Linguists United, an Iraq-based group that claims to have 1,800 members, is asking interpreters across the country to conduct a one-day strike on that day to protest the decision. The changes do not apply to interpreters hired locally.

"Linguists want to come to Iraq, and GLS does want to get us out of here and bring cheaper linguists who did not want to put their life in [danger] when Iraq was more dangerous," said interpreter Ameer Yilmaz. "We feel like GLS /Titan used us, and they are done with us. Also, we felt like they were trying to scare linguists to accept the pay cut by using these words."

Douglas Ebner, a spokesman for DynCorp, the majority owner of GLS, said the changes to GLS&#8217; contract required it to cut costs, forcing managers to examine where to make those cuts.

Ebner would not speak about how much the contract was cut or why the cuts were made. However, Stars and Stripes has learned that the changes to the contract involved a nine-figure reduction without any change to the number of interpreters GLS was required to provide.

The company decided to spread those cuts across the board, including corporate and management salaries. Ebner would not talk about specifics of those cuts or whether the pay of James Marks, the chief executive officer, was affected except to say that "no one was exempt."

"We&#8217;re talking about distributing this fairly across the board," he said.

The company plans to pay its interpreters a single, fixed base salary for each pay grade instead of the widely varying salaries interpreters now receive. Post differential and hazardous duty pay will each be cut from 35 percent to 25 percent of the base salary. Six- and 12-month completion bonuses will also be reduced.

Interpreters told Stars and Stripes that they&#8217;ll lose between 30 percent and 40 percent of their paychecks, with some reporting cuts close to $40,000. Ebner said he thinks those numbers are on the high end but said that they aren&#8217;t impossible.

"It really varies on how much individuals are getting," he said.

"Every interpreter has to make a decision about whether they wish to continue employment," he said.

Their contract also contains contradictory language that both allows them to be fired at will and requires the employer to have a justification for firing them, he said.

In Burlison&#8217;s interpretation, that makes them so-called "for-cause" employees, and their decision not to sign a revised contract is not a good enough reason to fire them.

He added, though, that he thinks it would still be discriminatory to fire them even if they were "at will" employees. In either case, he thinks GLS has no right to fire them however much they make.

"The legality of this centers only on the contract," he said. "They are clearly in breach with what they&#8217;re doing. A contract is what it is. If GLS expected to pay a sum, they cannot modify it unless the contract permits it, and this contract doesn&#8217;t."

GLS maintains that it can legally let its interpreters go, although Ebner would not respond to Burlison&#8217;s assertions.

Interpreters are also upset about the possibility that Iraq&#8217;s security improvements are behind the cuts. A letter Marks wrote to affected employees attributed the changes in post differential and hazardous duty pay to the improving security situation.

"In light of the recent military successes and stabilization of the security situation, I have decided to revert the uplift percentages back to the level preceding 2004-2005," Marks wrote in a letter to those affected informing them of the pay cuts.

But the interpreters argue that Iraq is still dangerous even with its improvements. Linguists United also notes that the Department of Defense has kept its rates at 35 percent.

"You cannot walk in the street freely," said interpreter Mohammad Alzayadi. We deal with too many situations. My job here (is) close to Iranian border so (it&#8217;s) risky."

Ebner said that the company mentioned the security situation only for "background and context," not because it was the cause of the cuts.

The interpreters also fear that GLS is using increasing numbers of interpreters and high unemployment back home to pressure them to sign.

"Retention of linguists has increased steadily over time and we have a large qualified pool of candidates," Marks wrote to the interpreters.

Ebner would not discuss the number of potential interpreters GLS has except to say, "The real bottom line is GLS &#8230; will meet the needs of military units in combat zones."

"We do not seek, by any means, an us-and-them environment," he said. "But we do have this financial reality."

Burlison said GLS rebuffed his requests to try to resolve the dispute through mediation, similar to the way a union would negotiate a contract.

The mediation would not be binding and it would be cheaper than the years of litigation that could arise from a lawsuit.

"If there was mediation, I think it would all go away," he said.

One interpreter who did not want to have his name printed said privately that a strike had little chance of success. While he said he was angry about the changes, he noted that the interpreters are not unionized. Of the 11 U.S. interpreters on his Baghdad forward operating base, he estimated that nine of them would eventually sign on to the changes. He planned to sign as well but was holding off to the last minute to see what happened.

But others say they are less willing to reconcile.

"I will never say the money that I am making is not more than anybody else," Yilmaz said. "There are many people that are making a lot less than what I make for working even harder, but this does not mean that our company will cut our money and pocket it. I will definitely quit and I know that I will lose my house but I just hate being a tool for GLS to charge money from (the) government."