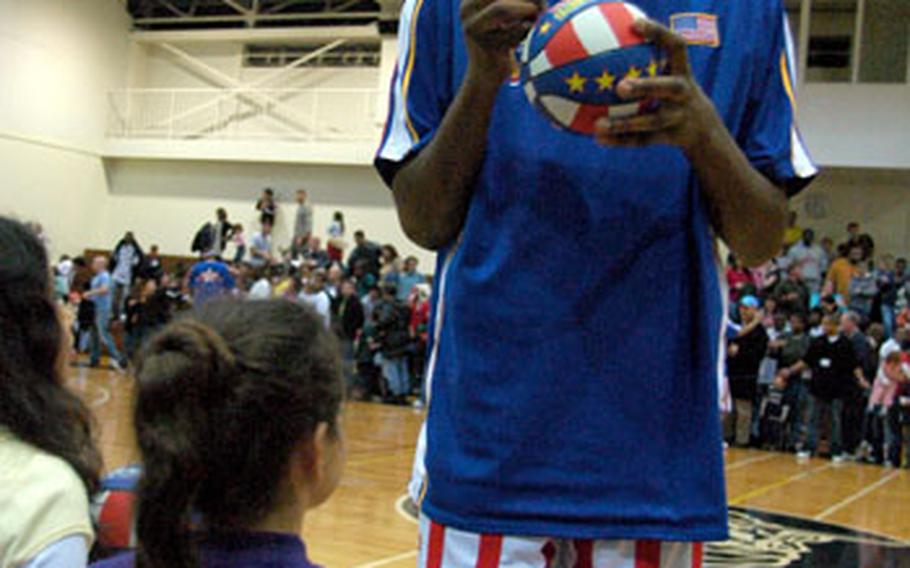 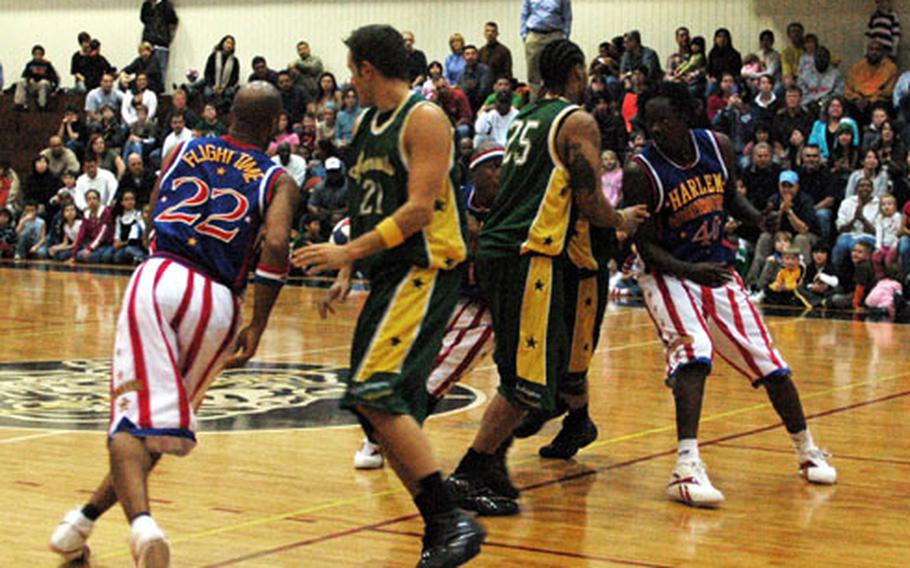 Harlem Globetrotters trap members of the Washington Generals in their trademark figure-eight offense during a game Friday night in the Samurai Fitness Center at Yokota Air Base, Japan. The Globetrotters visited Yokota as part of their holiday tour of military bases throughout the Pacific. () 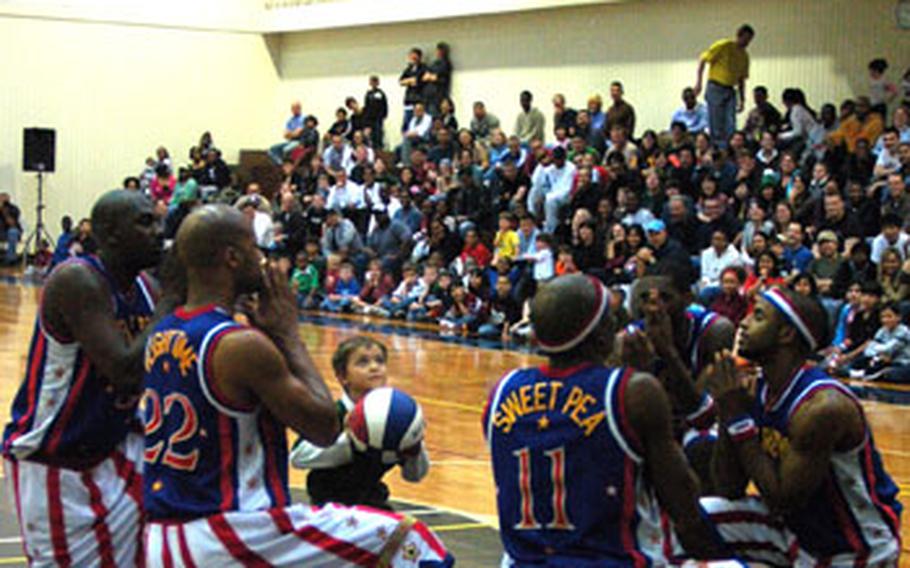 Members of the Harlem Globetrotters offer prayers as a young member of the audience prepares to take a shot Friday night Yokota Air Base’s Samurai Fitness Center. The Globetrotters visited Yokota as part of their holiday tour of military bases throughout the Pacific. ()

YOKOTA AIR BASE, Japan &#8212; This was going to be the night, the coach of the Washington Generals told the crowd at Yokota&#8217;s Samurai Fitness Center on Friday.

Yes, it would be the night, coach Ben Augustine said, when the Generals would finally defeat their longtime rivals, the Harlem Globetrotters.

But while every fan in the room knew it wouldn&#8217;t happen, that didn&#8217;t make the game &#8212; full of remote control basketballs, rigged scoreboards and even a slam-dunking granny &#8212; any less enjoyable.

"It&#8217;s a great show," said Lt. Col. Derek Grimes, a longtime Globetrotters fan who came to the game with his wife and four children.

Growing up watching legends like Curly Neal and Twiggy Sanders, the Globetrotters cartoon show and "even the Scooby-Doo episodes," Grimes said he never had the opportunity to see the team live until he was in the military.

"This is the second time we&#8217;ve seen them as a family," he said, adding that even though some of the jokes may be a little cheesy, that&#8217;s part of the Globetrotters&#8217; enduring charm.

Grimes&#8217; son, Cole, 11, said he also is a fan of the Globetrotters and their pranks, especially when they yank down the pants of an opposing player in the middle of a shot.

Staff Sgt. Jamie Crooks, watching the game with his son, said events like Friday&#8217;s are a great opportunity to spend time with the family.

Fortunately, the Globetrotters are an easy organization to work with, she said. And now that the Navy and Armed Forces Entertainment have worked six overseas holiday tours with the team, everything pretty much runs like clockwork, she added.

Globetrotter holiday tours rotate each year between bases in the Pacific, Europe and Southwest Asia, Fritz said. This year&#8217;s three-week Pacific tour will take the team to 12 bases in Korea, Japan and Guam.

"It&#8217;s become an annual event for me," said Herb "Flight Time" Lang, in his 10th season with the team and visiting his 60th country and on his third holiday tour. "Now it&#8217;s what I anticipate doing this time of year."

The son of an Army National Guard chaplain, Lang said it&#8217;s an honor to perform for servicemembers overseas.

"The best part of this job is to get the feedback from the fans," he said.

On his first tour with the Globetrotters, 7-foot-3-inch Shagari "Skyscraper" Alleyne said that coming to Asia has been a great experience, but he&#8217;s even happier to be able to provide entertainment to the troops.

"Being here gives me a perspective of how good I have it," he said, expressing his gratitude to servicemembers for defending the nation&#8217;s freedoms and allowing him to have the opportunity to travel the world and play basketball.

After four quarters of play, a little bit of "Globetrotters&#8217; Football," a chase around the court with a bucket of water and an impromptu dancing of "YMCA," the evening ended with another Generals&#8217; loss. However, no one seemed to mind, except for maybe the losing coach, who quickly left after being given a pink tutu to wear by the Globetrotters&#8217; captain.

"I thought it was a wonderful show," said Maj. Gail Roberts. "It was awesome and really, really funny."