Global War on Terrorism Memorial is planned for the National Mall 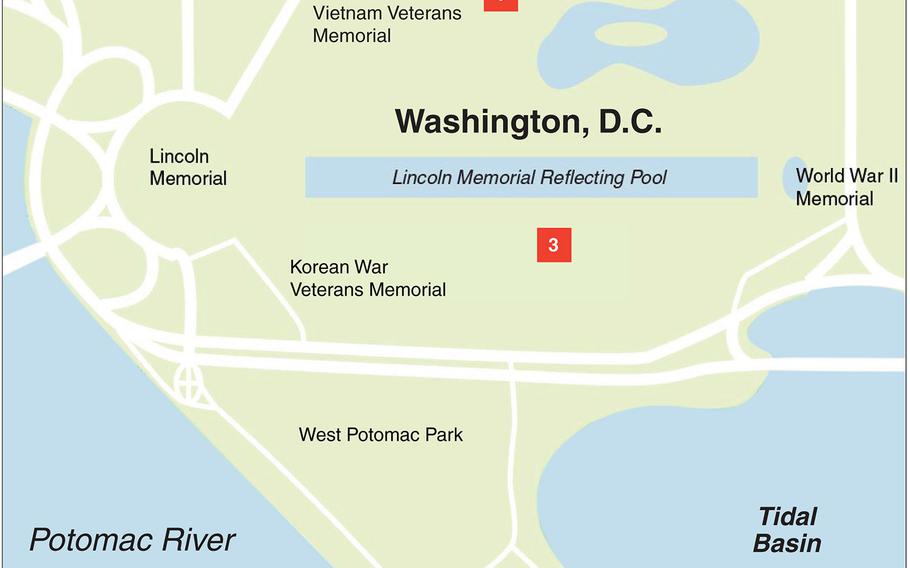 Two House lawmakers introduced a bill Tuesday to propose three locations for the new Global War on Terrorism Memorial on the National Mall in Washington, D.C. The choices are: (1) Constitution Gardens, near the Vietnam Veterans Memorial; (2), JFK Hockey Fields, across from West Potomac Park; and (3) near the Lincoln Memorial Reflecting Pool, between the Korean and World War II Memorials. ()

WASHINGTON — The U.S. wars against terrorism have lasted 18 years, and post-9/11 veterans and service members could soon have a memorial on the National Mall to honor their service.

Reps. Jason Crow, D-Colo., and Mike Gallagher, R-Wis., introduced a bill Tuesday to propose locations for a new memorial to honor veterans of the Global War on Terrorism. President Donald Trump approved the construction of a new memorial in 2017 and the proposed legislation designates options of where to build it in Washington. The three possible locations place the new memorial near the Korean, Vietnam and World War II memorials.

“In some ways, these are becoming forgotten conflicts,” said Crow, an Army veteran of the wars in Iraq and Afghanistan. “I never pass an opportunity to highlight these conflicts are still ongoing. We’ve been at this for almost two decades.”

The proposed Global War on Terrorism Memorial has a target to open in 2024 and it would be the first dedication to a war’s veterans on the National Mall while the conflict is ongoing. Nearly 8,500 Americans have been killed in combat since 2001.

The memorial is funded through donations to The Global War on Terrorism Memorial Foundation, a nonprofit aiming to raise about $50 million for the project. However, the memorial is in the early planning stages and there aren’t any proposed designs yet. It’s possible the price tag could increase depending on the memorial’s location and design, according to Michael “Rod” Rodriguez, an Army Special Forces veteran and CEO of the foundation.

“This memorial, when built, is for the men and women who have died fighting, those who continue to fight and those who are still joining the fight against terrorism,” Rodriguez wrote earlier this year in a blog post. “By building a national memorial in their honor, we are building a memorial to a living war – something that’s never been done in this country. But then again, the GWOT is a war unlike any we have ever seen. This is our nation’s first and only multi-generational war. We cannot look to past precedent on when memorials were built, as this conflict has no precedent.”

A World War I memorial is also planned for Pershing Park near the White House. It’s unclear when the project will be complete.