Global War on Terrorism medals held up by review 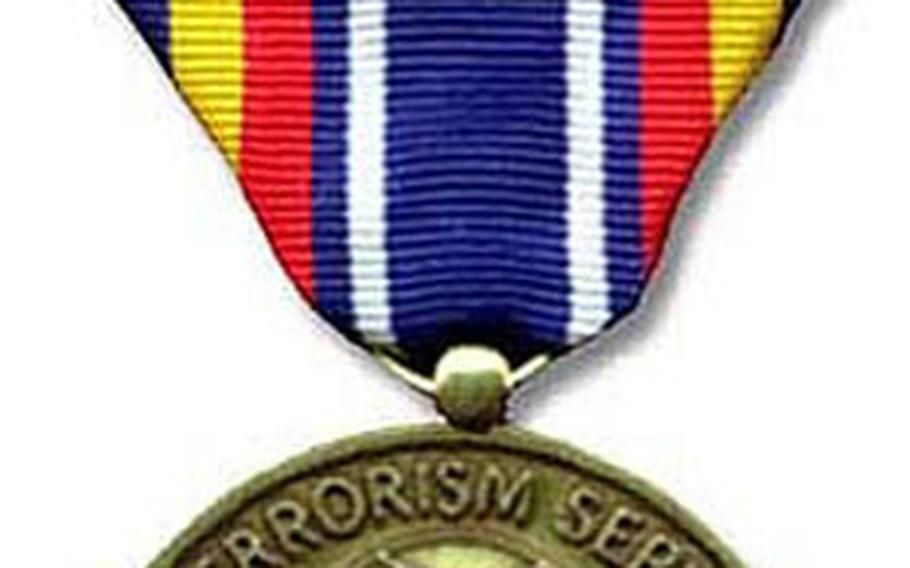 If servicemembers are saving a few spots on their ribbon bar for the Global War on Terrorism Service or Expeditionary medals, they may be waiting a while before they&#8217;re filled.

Last year, President Bush authorized the medals, but &#8220;the criteria for the medals are still in the review process,&#8221; Department of Defense spokeswoman Lt. Cmdr. Jane Campbell said last week.

The two medals are similar in name but differ based on what a servicemember does in the war on terrorism. The expeditionary medal &#8220;is for those who deploy to fight, and the service version is for those who support and defend,&#8221; Campbell wrote in an e-mail to Stars and Stripes.

Campbell stated that work&#8217;s still being done on the expeditionary medal.

&#8220;The package designating the specific area of eligibility for the ... expeditionary medal is currently with the [DOD Office of the] General Counsel for their review and coordination.&#8221;

Campbell wouldn&#8217;t speculate on when the medals would be authorized.

Once Deputy Secretary of Defense Paul Wolfowitz approves the specifics for the medals, Campbell wrote, guidance will be passed to the services. Only then will the medals start being issued to troops.

Military members aren&#8217;t the only ones waiting.

On Oct. 16, the U.S. Senate passed an amendment to the Iraq and Afghanistan supplemental funding bill that &#8220;express[es] the sense of the Senate that the Global War on Terrorism medal should be awarded expeditiously to members of the Armed Forces serving in Operation Iraqi Freedom, Operation Enduring Freedom, and Operation Noble Eagle.&#8221;

Veterans groups and members of Congress have expressed their dissatisfaction at the generic GWOT medals, mostly stating that they don&#8217;t recognize the specific campaigns members may serve in.

A number of senators and representatives have since sponsored bills, or amendments to bills, for specific campaign medals.

For example, a bill by Sen. Jeff Bingaman, D-N.M., to authorize an Iraqi Liberation Medal is under review in the Senate Armed Services Committee.