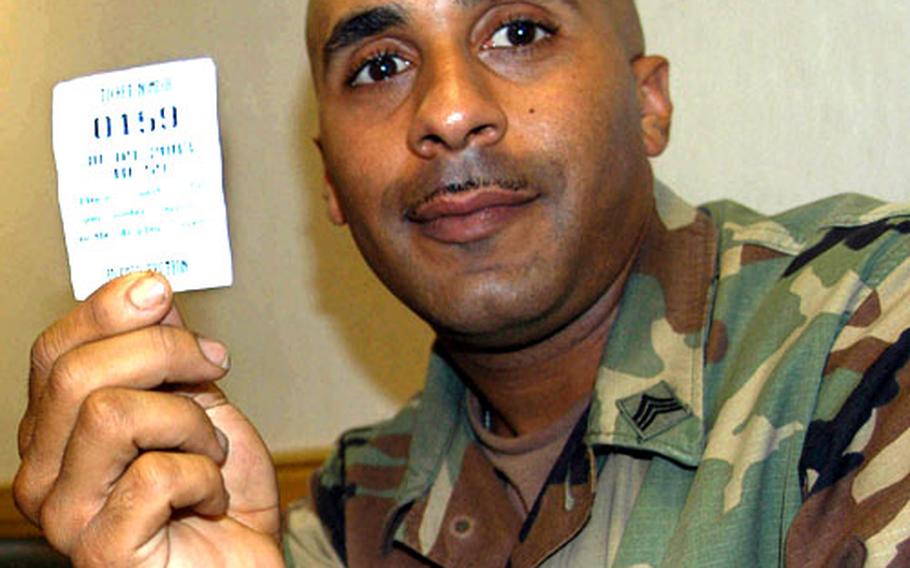 Sgt. Raymond Rossi, a soldier stationed at Camp Kyle, shows his number in line for a new ID card Tuesday at Yongsan Garrison. Rossi still was waiting around 4 p.m. even though his number was marked 10:59 a.m. (Jeremy Kirk / S&S)

YONGSAN GARRISON, South Korea &#8212; Although South Korea was one of the first overseas sites to field the Common Access Card in spring 2001, long lines and equipment malfunctions have slowed its distribution.

Because of the delays, military personnel and Department of Defense civilians in South Korea now have a reprieve on an Oct. 1 deadline to get the new card. People without one still will be able to get on post but are encouraged to get a new card soon, said Lt. Col. Steve Boylan, 8th Army public affairs officer.

Servicemembers and Department of Defense employees are the first priority for getting replacement cards and Korean employees will be next, Boylan said.

The Army is outfitting its computers in South Korea with a system that will require an ID card to access e-mail, Boylan said. The digitally encrypted signed e-mail, part of what DOD calls the Public Key Infrastructure system, will ensure that only one person can access an account and that the sender&#8217;s identity is authenticated.

The CAC, which costs from $6 to $10 to produce, has a magnetic strip and can be used to gain access to controlled areas, while two bar codes and a 32-kilobyte computer chip store identification, demographic, salary, medical and benefits information. The chip also has codes that let users access DOD computers and e-mail accounts.

Initially, the card will be used for identification. But plans call for eventually using it for checking into a new unit, and as a meal card. The computer chip also can contain a person&#8217;s name, gender, benefits, blood type and medical records. The Defense Department chose South Korea, and some bases in Germany, to field the CAC in spring 2001. Defense officials have said they hope the cards will become the cornerstone of a paperless and computer-secure military.

But getting the cards has proven a challenge.

On any given day &#8212; and especially in the run-up to the original Oct. 1 deadline &#8212; dozens of soldiers and civilians sat for hours outside the 1st Replacement Company&#8217;s ID card office, waiting for their number to be called.

Typically, the line already was dozens long, when the doors officially opened at 8:30 a.m. On most days, the number-dispenser has been turned off before lunch, with a small sign taped over it saying that because of high demand and mechanical problems, no new customers will be helped that day.

&#8220;The first time, I took an afternoon off work at my own expense, came down here at one in the afternoon and that sign was already up saying nobody else would be helped. The next time, I sat waiting for four hours, then gave up.&#8221;

The third time was the charm: Barnes finally left with his new card. But the long waits he experienced are a familiar story.