Glenister assumes command of largest Navy base in Asia 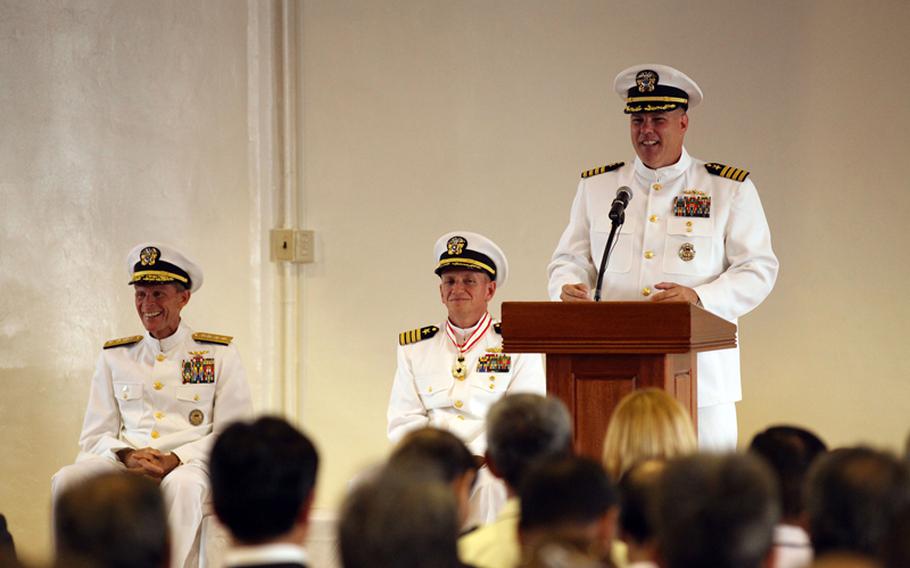 Navy Capt. David Glenister speaks at his change of command ceremony at Yokosuka Naval Base on Aug. 8, 2013. He relieved Capt. David Owen, who is sitting next to Glenister. Left of Owen is Rear Adm. Dan Cloyd, head of Commander Naval Forces Japan. (Trevor Andersen/Stars and Stripes)

Glenister comes to Yokosuka from the Pentagon, where he served with the Joint Capabilities Division.

A University of Notre Dame graduate, he previously spent a tour in Yokosuka as 7th Fleet’s deputy plans officer. He also served aboard the USS Fitzgerald and USS Antietam, both of which are now homeported in Yokosuka. His previous ship commands include the minehunter USS Falcon and the frigate USS Rentz.

Outgoing Yokosuka commander Capt. David Owen is headed to the Board of Inspection and Survey, better known among sailors as Insurv. Owen spent more than three years at Yokosuka.

Although the mayor-like base commander role does not include authority over 7th Fleet ships, it carries a high profile in terms of relations with the Japanese community.