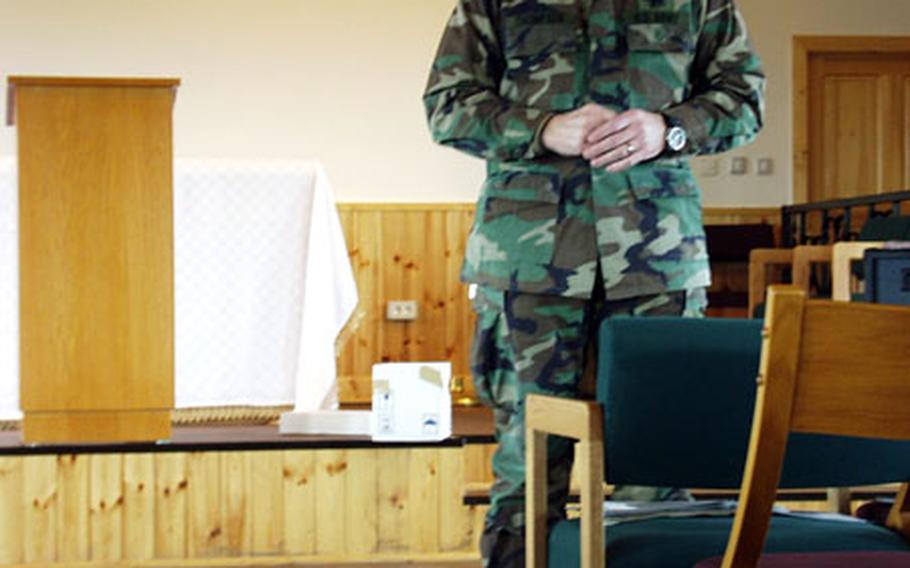 Army Maj. Mike Thompson, a former Navy SEAL, is now an Army chaplain. He said he relies upon all of his life experiences, which include racing motorcycles, being a cop and working as a welder, to help other soliders. (David Josar / S&S)

Raised in a strong Southern Baptist home, Thompson, now 51, raced and crashed motorcycles, became a salvage diver and then an elite Navy SEAL. He divorced, remarried the same woman, became a cop, started his own welding business, and, finally, became an Army chaplain.

&#8220;I was lost, but I eventually found my way,&#8221; said Thompson, one of several chaplains now deployed to Kosovo from the 1st Infantry Division in Germany.

Thompson says he tries to help fellow soldiers by blending his background, his understanding of special operations troops and his experience in finding his way through life&#8217;s maze.

The story of the prodigal son is a parable told by Jesus. In a bare-bones version, the son of a wealthy man takes his inheritance early and travels. He spends the money, living a lavish life. When the money is gone, the son discovers he is missing something and realizes that it is with his father that he was happy. So he returns home, where he is welcomed by his father.

Thompson recalled going to church regularly with his father while growing up in Texas, but he eventually stopped.

At first, however, he simply wasn&#8217;t strong enough. He had injured a knee in a motorcycle crash before enlisting, so he began by working as a salvage diver and eventually was accepted into the SEALs and the basic underwater demolition team training.

In 1975, at age 25, he was assigned to Seal II Team based in Virginia. He loved the life of dangerous missions, drinking buddies and carousing, but he knew something was missing.

Thompson spent two years as a SEAL. His first assignment was taking care of the team&#8217;s dive equipment, and eventually he would be a radioman.

This was also the time his first child was born, who nearly died at birth from a bacterial infection, Thompson recalled, and the stress of his job was also beginning to harm his marriage.

After the Navy, he returned to the States, got a police job and divorced his wife, Debbie.

A year later he remarried Debbie, left his job, moved to Oklahoma and began a welding business that quickly flourished. At the time Thompson was in his early 30s and beginning to figure some things out.

He became involved with the youth ministry of a local church and devoted more and more time to his spiritual interests. Eventually he was offered a full-time job at the church, sold his welding business and began to take classes at a local seminary college.

But, with his wife&#8217;s support, he pushed on. He eventually moved to San Jose, Texas, to attend college and seminary. He worked driving a limousine, cleaning offices and other jobs. His wife worked in a doctor&#8217;s office. And there were now two children in the family.

As he pursued becoming an ordained minister, he wasn&#8217;t sure how he was going to practice what he was learning to preach.

He thought back to what he wished he had earlier while in the military, and then saw a military chaplain address a Southern Baptist convention on television. He was inspired &#8212; but Debbie had her doubts.

As a Navy SEAL, he estimated he was home a total of 60 days in two years. His wife didn&#8217;t want that lifestyle again, he said.

Her heart did change, but not until Thompson was near the end of his religious training. It was 1991, and the former SEAL was 38, with 40 the cut-off age for joining the Reserves.

Still he kept putting in his packet and receiving physicals that kept saying his knee injury hurt his chances to be accepted.

Just a few days before his 40th birthday, he was accepted into an Army Reserve unit. Shortly afterward, he became a full-time officer. At age 42, he was the chaplain for a unit of the 82nd Airborne.

But during an inspection, an officer who knew Thompson&#8217;s background asked why he wasn&#8217;t wearing the patch. Thompson replied that he didn&#8217;t feel comfortable doing so, but would pray on it. Eventually, he put the patch on.

He admits the patch helps special operations troops open up to him. He acknowledged there is a mind-set among these troops to not show concern, worry or weakness, and hopes he can help them.