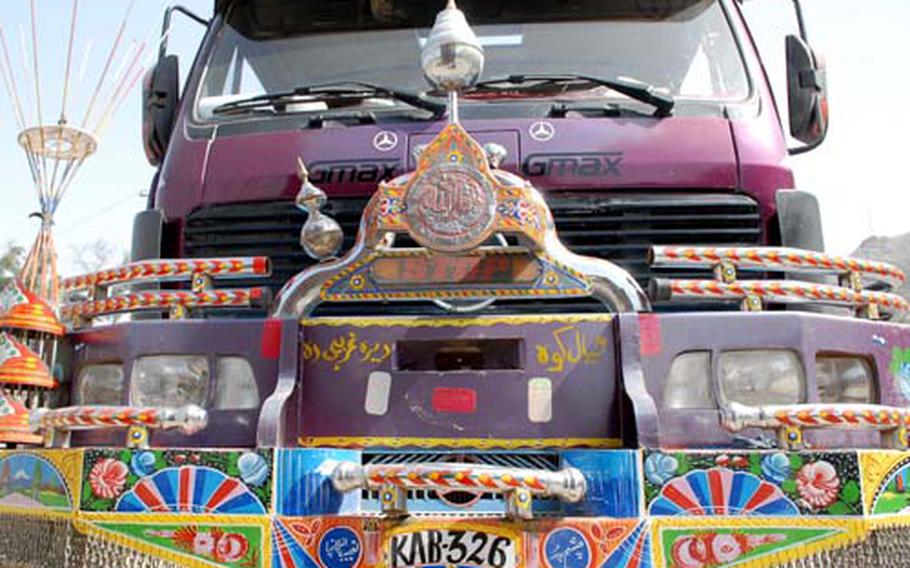 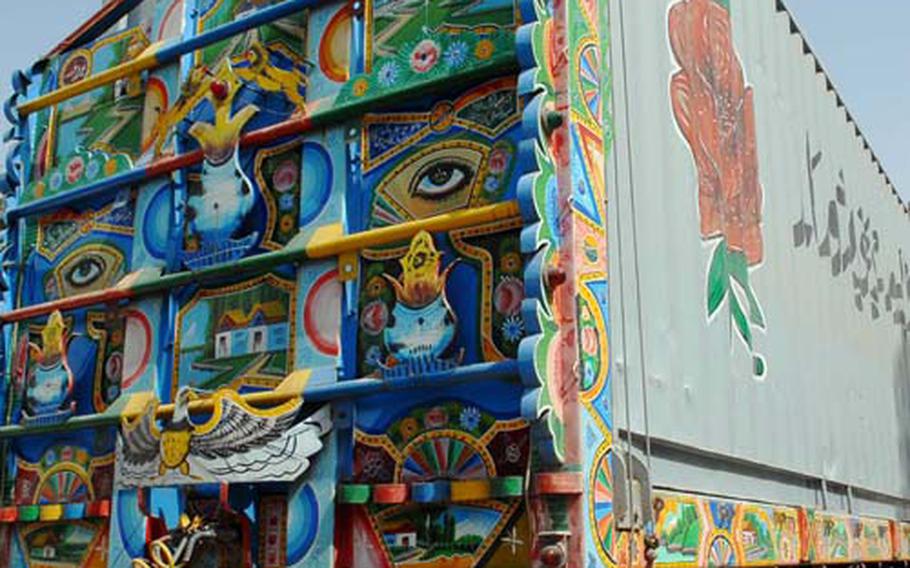 U.S. officials say most of the commerce that passes through such official border crossings is legitimate. (Michael Gisick / S&S)

TORKHAM&#8217;S GATE, Afghanistan &#8212; The line of trucks stretching back along the road to this border crossing in the Khyber Pass runs a mile or more, and as it eases forward there&#8217;s a distinct tinkling sound amid the wheezing and coughing of the diesel engines.

That would be the "jingle trucks," pride of Afghanistan&#8217;s transportation. In all, better than 500 vehicles pass this way on the average day. Many of them are dressed in metal skirts, painted like rainbows, jingling with bells and topped with improbable turrets and even more improbable loads of cargo.

Insurgents and weapons are hardly the only things crossing the Afghan-Pakistan border, and U.S. officials say the majority of the commerce plying this ancient trade route is legitimate. But Pakistanis are getting the better end of the bargain.

With Afghanistan&#8217;s largely agrarian economy lacking even basic infrastructure, Afghan farmers in the east remain at the mercy of Pakistani merchants for everything from cold storage to canning, and often end up buying back what they sell at considerable mark-up, officials say.

"If it&#8217;s not sold by the side of the road, it&#8217;s sold to Pakistan," says U.S. Army Master Sgt. Larry Godsey, an agricultural adviser based in Jalalabad, at one end of the highway that runs through Torkham&#8217;s Gate to Peshawar, Pakistan.

Take tomatoes, Godsey says. Afghan farmers sell them to Pakistani businesses for a cent-and-a-half per kilogram. The Pakistanis dice them, put them in a can, and "three months later" the Afghans buy them back for 10 cents a kilogram.

Or wheat. Afghans have no cold storage to keep their surplus harvests, so they sell them to Pakistan, then buy them back in winter at four or five times the price.

"There&#8217;s zero value-added processing in Afghanistan," says Godsey, who is part of the inaugural Agribusiness Development Team in Nangarhar province. And in simple terms, Pakistani businesses are taking advantage.

"What do you expect when they can buy wheat at one-third the world price because people in Afghanistan don&#8217;t know what the world price is and have no outlet to the world market," Godsey says.

In a country like Afghanistan, it&#8217;s hard to know where to start. There are no processing plants or cold storage facilities, but there&#8217;s little electricity to run them if there were. U.S. officials in Nangarhar estimate the province&#8217;s electrical needs at 60 kilowatts a day, but say it rarely gets more than 10 and often as little as 4 or 5, most of it coming from a silted-up Soviet-era dam. Seventy percent of the province&#8217;s arable land, meanwhile, lacks a reliable source of irrigation.

U.S. officials are pushing for a series of small hydroelectric dams that would provide local power, prevent flooding and hold irrigation water for the rainless summers.

Officials hope the provincial government, which recently received a $10 million award after the province was declared poppy-free, will pony up some of that money for the dams.

"Power is the linchpin to everything here," says Army Maj. Robert Minton, a civil affairs officer with the American provincial reconstruction team in Nangarhar.

Without a bigger budget, development efforts have remained smaller scale. The Americans have paid for a livestock slaughterhouse and are working to improve seed quality and form agricultural cooperatives so farmers can pool resources. A number of nongovernmental organizations are also active in the province, though American officials say the overall effort is not well-coordinated.

One of the Americans&#8217; main projects has been a district map that marks all the reconstruction projects that have been completed or are under construction.

Still, Godsey&#8217;s agribusiness team, which other troops refer to as "the farmers," has a good deal of respect for their Afghan counterparts. The Americans started a model garden on their base in Jalalabad, and after several team members went on leave and KBR contractors turned off their water, everything died.

"Really, these farmers do pretty well," Godsey says. "What they need is legitimate power and water. If they get that, they&#8217;ll double production."