Give thanks and more 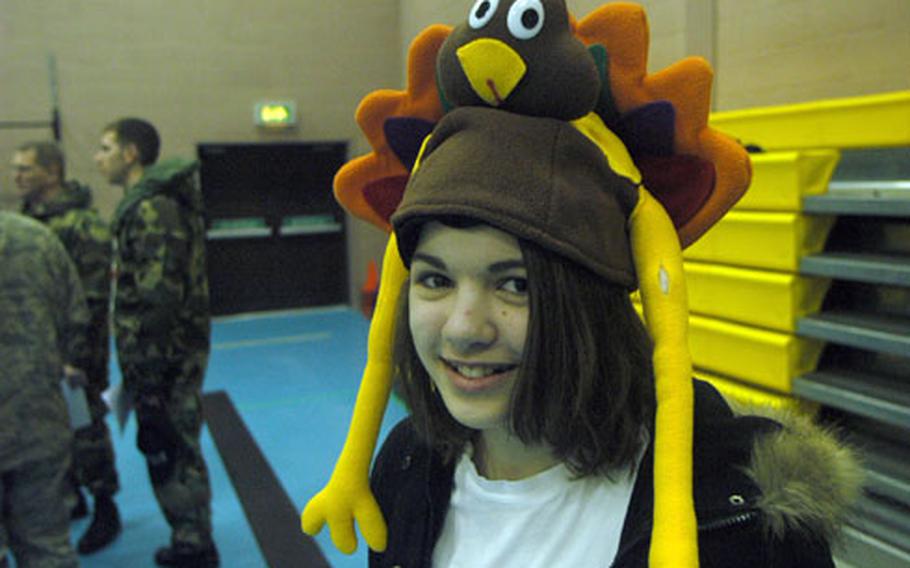 Becki Wright, an eighth-grader, volunteered to direct foot traffic during the Turkey Trot. ()

Becki Wright, an eighth-grader, volunteered to direct foot traffic during the Turkey Trot. () Students dressed up in Thanksgiving-theme costumes take off Friday. (Photos by Charlie Reed/S&S) 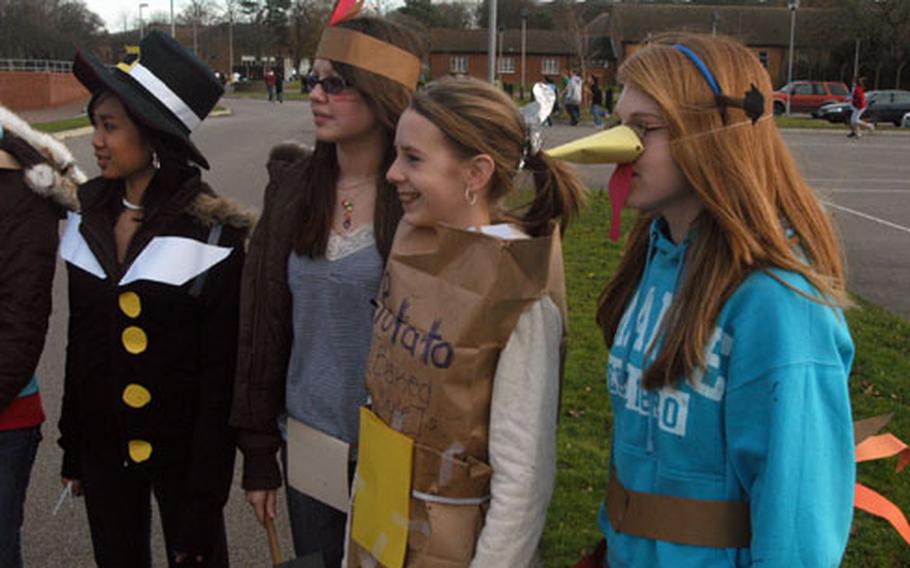 From left, Jessica Bermudez, Elisabeth Rhea, Shelby Vondenstein and Marissa Parnminter, all eighth-graders at Lakenheath Middle School, line up Friday to run the school’s first Turkey Trot. Boy’s and girl’s winners from each grade won a turkey for Thanksgiving. ()

Instead of a leisurely day of football and food on Thanksgiving, Tech. Sgt. Stan Newhard is getting out of town.

Newhard, who is at RAF Mildenhall on temporary duty through January, is taking a hiking trip to Wales with Outdoor Recreation on that day.

"A couple of us that are here TDY are going to band together and go explore the country," said Newhard, a reservist from the 943rd Rescue Group at Davis-Monthan Air Force Base, Ariz. "It seems like every year I do something different."

But it&#8217;s not a totally atypical holiday. As part of the excursion, Outdoor Recreation has arranged for a turkey dinner at a pub in Snowdonia after the trek.

The holiday excursions are often the most well-attended events, usually full of single airmen from the dorms, Wainwright said.

For those who want to stick close to home, or at least get a homecooked meal, there are a couple of options at RAFs Mildenhall and Lakenheath.

The 48th Avenue Community Activity Center is pairing up singles with local American families who volunteered to serve the airmen a hot Thanksgiving meal and little taste of home.

"We know that the holidays can be a tough time for single airmen or unaccompanied airmen, so we try and get them with some folks for a home-cooked meal for the holidays and make them feel at home," said Crista Nordyke-Long, center director.

For those feeling less social, the Single Airmen Ministry at Mildenhall is providing a Thanksgiving lunch at the dorms. With video games, a large-screen TV and other activities, those who attend are welcome to hang out or just come for a hot plate of food. The meal will be served in dorm 210 between 11 a.m. and 1 p.m.

Members of the base chapel will provide the food and the meal is open to anyone, not just those affiliated with the ministry, said Chaplain (Maj.) Pat Beck. The Single Airmen Ministry aims to keep its activities secular in hope of attracting airmen who are not particularly religious, he said.

But for those who are looking for a little spiritual charge, said Beck, a long-standing American service at Ely Cathedral on Thanksgiving Eve is worth attending. In its 22nd year, the annual service is hosted by RAFs Lakenheath and Mildenhall and draws several hundred Americans and Britons, Beck said.

The cathedral service begins at 7:30 and will be followed by the pie social. Buses will run to Ely Cathedral from the Mildenhall and Lakenheath chapels, leaving base at 5:45 p.m. Seats are on a space-available, first-come-first-serve basis.

Beck said the sermon is always themed around the holiday and the idea of being thankful every day.

"Between the location, in a medieval cathedral, and the Thanksgiving theme, it just really appeals to people," he said. "It&#8217;s a nice event, especially if you&#8217;ve never had a chance to see the cathedral before."