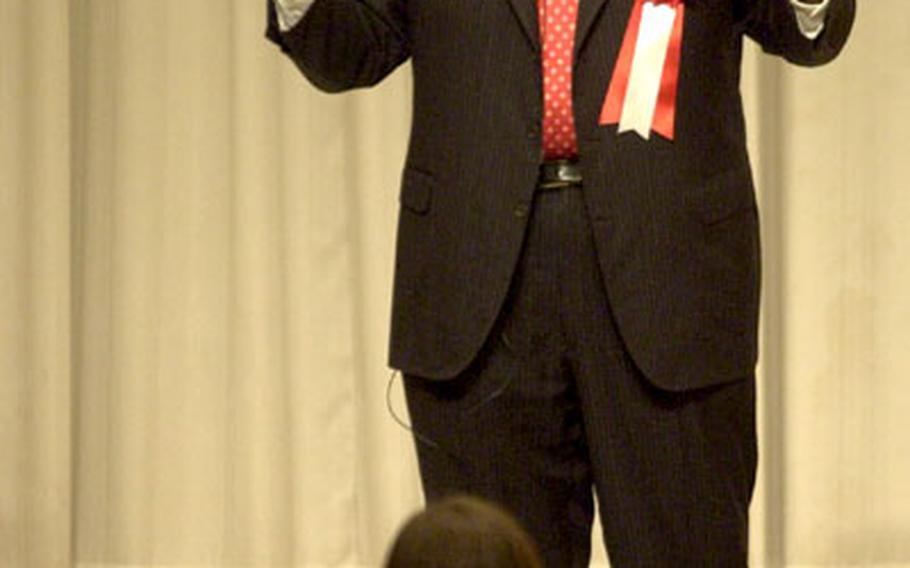 Former New York Mayor Rudolph Giuliani speaks on the challenges of fighting crime and terrorism at a lecture hosted by Yomiuri Shimbun in Tokyo on Tuesday. (Jim Schulz / S&S)

For a start he sweated the small stuff, he told some 300 police officials and business leaders at a lecture hosted by Yomiuri Shimbun.

New York City had America&#8217;s worst crime rate when he was elected mayor in 1993, Giuliani said, but he managed to reduce it by changing how the city and police handled crimes.

He reviewed city crime statistics to learn whether New York had enough police and had them deployed in the right places, the former mayor said. And he targeted smaller, street-level crimes despite criticism this was a poor use of the city&#8217;s law enforcement resources. &#8220;Criminals should never get the sense that they own any part of a city,&#8221; Giuliani said, or else they will think they can commit larger crimes.

He also told the audience terrorism was a major issue in New York City when he took office.

&#8220;I had this feeling, from the day I came into the office, that we would be attacked by terrorists,&#8221; he said &#8212; although he admitted anticipating something different from what actually happened. &#8220;Until it actually happens to you, at some point in your mind or emotion you don&#8217;t believe it&#8217;s going to happen,&#8221; he said, adding that the Japanese might feel that way now.

Believing the city was unprepared for terrorism, Giuliani said, he created an office of emergency management. The office ran city officials through several dry-run drills simulating actual emergencies and reviewed their performance. For instance, he said, the sarin gas attack nine years ago in Japan prompted New York to conduct a gas attack drill in the city&#8217;s subways.

The office also reviewed the city&#8217;s performance in actual emergencies.

He said while terrorists may lack resources, they know unanticipated attacks can wreak psychological damage on people. His suggestion: People should be prepared for every imaginable emergency.

He&#8217;s also scheduled to participate in a panel discussion in Osaka on Wednesday and speak in Nagoya on Thursday.