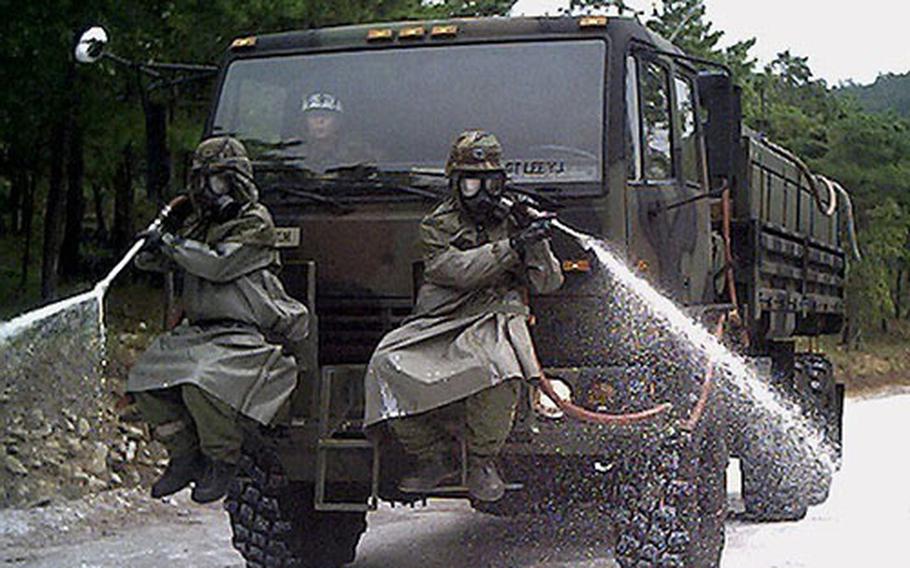 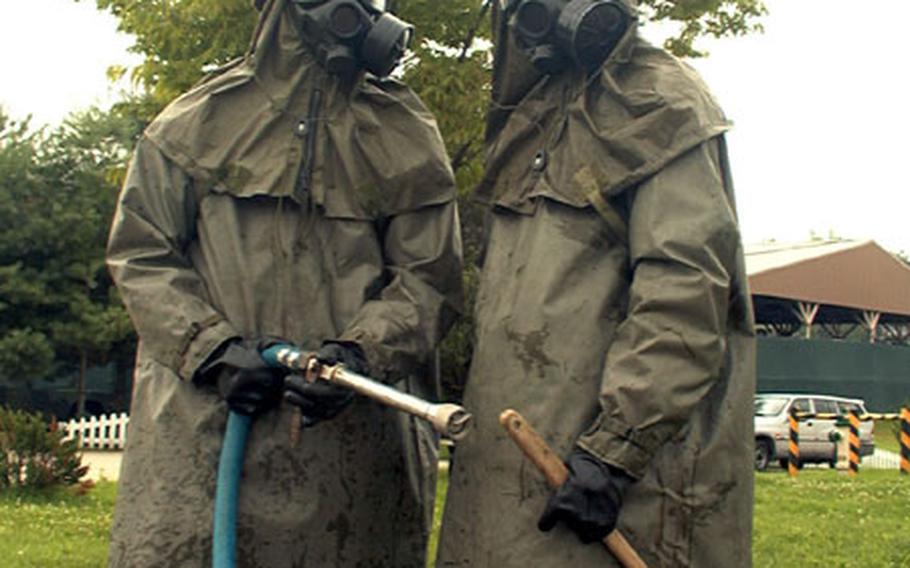 TAEGU, South Korea &#8212; If Pfc. Kim Min-soo ever has to treat a fellow soldier after a battlefield chemical attack, he knows exactly what to do.

Kim is a KATUSA, a South Korean soldier assigned to the U.S. Army. He&#8217;s a member of the 23rd Chemical Battalion at Camp Carroll in Waegwan.

The chemical battalion&#8217;s soldiers are trained to decontaminate terrain, buildings and people who have had contact with chemical agents.

Infantry and other units are responsible for treating their own soldiers for chemical contamination. The 23rd Chemical Battalion&#8217;s main mission is decontaminating terrain and &#8220;fixed sites&#8221; such as buildings.

Still, treating individuals is part of the battalion&#8217;s job.

Kim knows he can use a handheld meter to detect chemical agents on a soldier&#8217;s body. And he can use what he calls &#8220;M291 paper,&#8221; a small paper towel impregnated with charcoal, to decontaminate the soldier.

He also knows what can happen to a soldier hit by chemical attack if the unit doesn&#8217;t include such a decontamination specialist.

But Kim knew none of that when he arrived four months ago. He and other KATUSAs received Korean Army basic training but not the advanced chemical training that their U.S. counterparts receive after basic training.

To give the KATUSAs that additional instruction, the battalion runs its own school, the Decontamination Training Academy-Korea, or DTAK.

&#8220;It was activated so we could rapidly integrate the KATUSAs into the units so they could successfully perform their duties,&#8221; said Maj. Jim Bonner, the battalion&#8217;s executive officer and DTAK commandant.

&#8220;It means that when a soldier arrives to his company, he is fully trained, and prepared to integrate with his squad or platoon,&#8221; said Lt. Col. Bill Barnett, battalion commander.

The DTAK runs five to seven classes a year and trains about 140 KATUSAs. Three instructors from the Army&#8217;s Korean Service Corps Battalion teach the classes.

Each class cycle spans about seven weeks, with 15 to 25 students per class.

The school devotes the first four weeks to decontamination training. The fundamentals of NBC &#8212; nuclear, biological, and chemical warfare are covered first. Then comes training in how to detect NBC agents. A third phase covers NBC equipment.

Next comes 100 hours of driver training spread across three weeks. Driving skills are critically important because so much of the unit&#8217;s equipment is truck-mounted and, said Cho Hyong-suk, DTAK senior instructor, most soldiers lack experience driving big vehicles.

Besides classroom and driving instruction, Bonner said, students rely heavily on the KATUSA who functions as their platoon sergeant.

Sgt. Oh Yung-ho, the platoon sergeant, remembers arriving at the battalion about a year and a half ago, a nervous, apprehensive young KATUSA private.

Differences of language, culture and organization actually pose minimal difficulties, even with KATUSAs making up more than half the troop strength.

That makes the unit extraordinary.