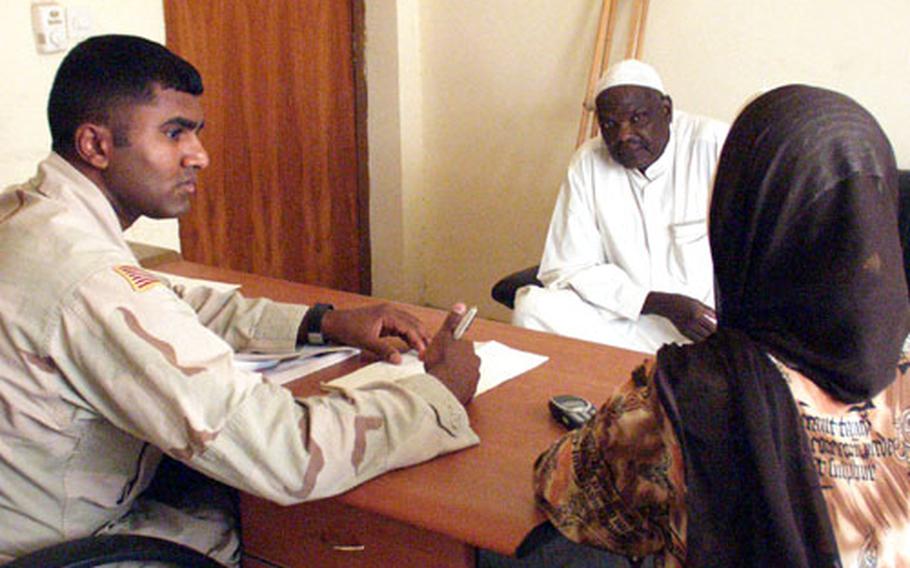 First Lt. Murugan Palani talks via interpreter to a Sudanese man trying to recover money he said the military wrongfully seized. He claims he was mistaken for a terrorist and put in prison, where he lost his left foot during an insurgent mortar attack. Forward Operating Base Hawk in Abu Ghraib in Iraq is an outpost for people to make claims against the government, plan public projects or to ask for advice. (Ward Sanderson / S&S)

First Lt. Murugan Palani talks via interpreter to a Sudanese man trying to recover money he said the military wrongfully seized. He claims he was mistaken for a terrorist and put in prison, where he lost his left foot during an insurgent mortar attack. Forward Operating Base Hawk in Abu Ghraib in Iraq is an outpost for people to make claims against the government, plan public projects or to ask for advice. (Ward Sanderson / S&S) 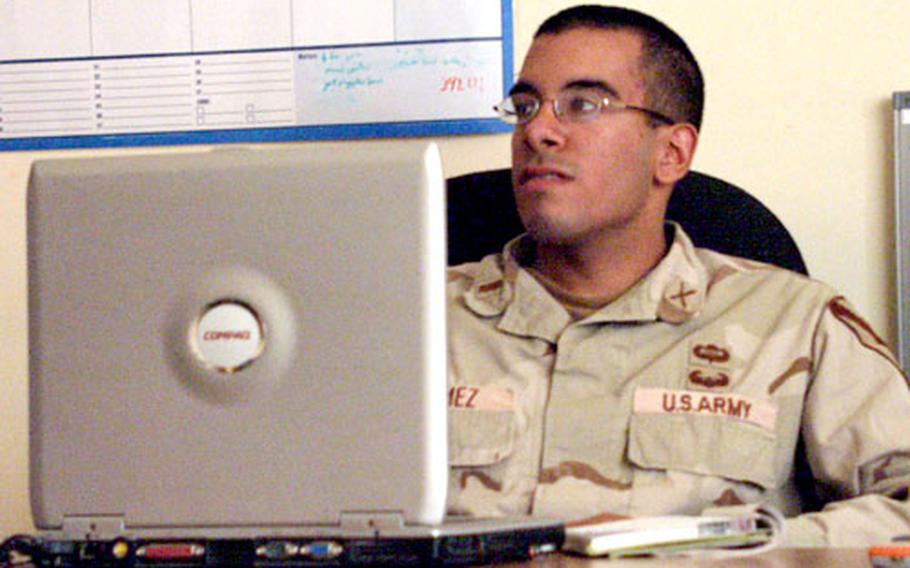 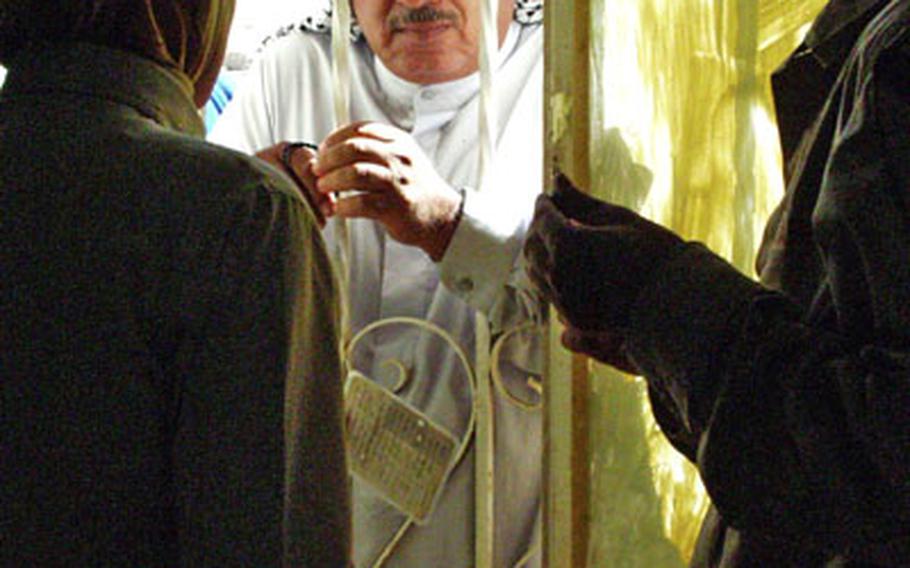 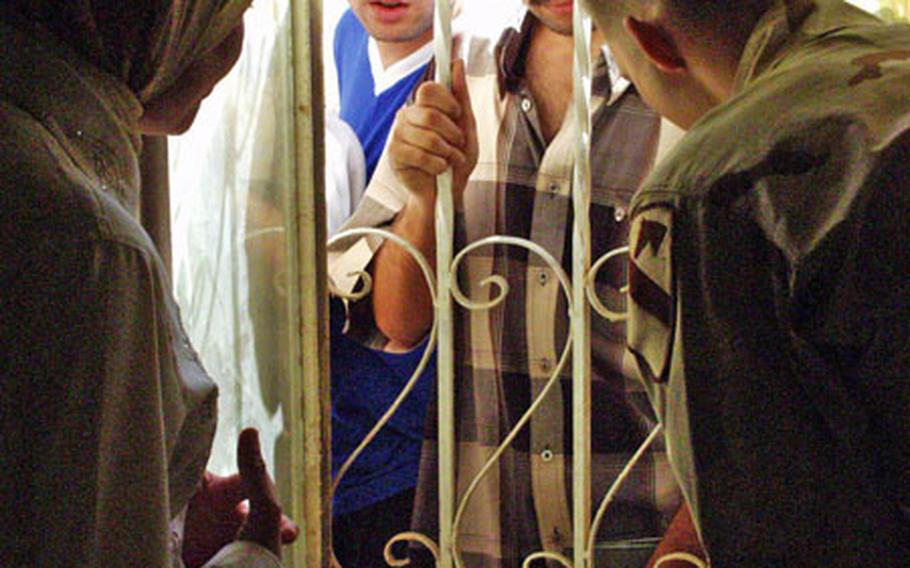 Spc. Jeffrey Jackson, right, counts out money to pay an Iraqi for his claim against the U.S. government. (Ward Sanderson / S&S)

FORWARD OPERATING BASE HAWK, Iraq &#8212; Wednesdays were always the same: The Sudanese man still showed up, he still lacked his left foot, he still wanted his $17,000.

The lieutenant wanted to give assurance that the money would be here next week. But 1st Lt. Murugan Palani could not do that. He could only say he was trying and would keep trying until he had an answer. Palani believed the Sudanese man&#8217;s story about the money, its seizure at the border, the prison and the mortar blast that took the foot.

The Sudanese man, Ibrahim, would never take Palani&#8217;s own money, which he offered in case Ibrahim were hungry. Ibrahim had been at this for a year. Palani had known many shysters and Ibrahim seemed the real thing.

This is what the soldiers provide at an outpost in Abu Ghraib &#8212; a place for people to approach them and make claims against them, to plan public projects with them, to ask them for advice. This was where the Americans left the checkpoints of Camp Liberty and sat down with the people of the town. This where they met men such as Ibrahim.

The 51-year-old&#8217;s money was seized by the 3rd Armored Cavalry Regiment at the border, he said. The soldiers of that regiment believed he was a terrorist and put him in prison. Insurgents later would fire on the prison and Ibrahim lost his foot to a mortar blast. Eventually, soldiers believed Ibrahim&#8217;s story, that he had been working abroad for many years and was fleeing the war with his savings.

Palani belonged to a whole different outfit, the 1st Cavalry Division&#8217;s 2nd Battalion, 12th Cavalry Regiment. He had no record of the money. So he waited until some fund, somewhere, could cough up Ibrahim&#8217;s $17,000.

Palani, 27, originally was a tank platoon leader and was somewhat new to this Army equivalent of the insurance claims business. He was not alone in such a fix. Down the hall, 2nd Lt. Daniel Gomez, all of 22, had gone from psychology major to instant engineer.

His unit had spent something like $3 million on construction projects so far. Last month, a truck bomb reduced one of them, a municipal building, to rubble, killing several people, including a U.S. soldier. Now, the sanitation official who met with him discussed building a new one. But the official bolted at the prospect of being photographed speaking with Gomez, a soldier.

The sanitation official also did not want responsibility over the garbage trucks Gomez had conjured, though he had asked for them. He said he could not guard them. A guard would run when the thieves with Kalashnikovs came. This frustrated Gomez. He and his interpreter argued over it, why wouldn&#8217;t an Iraqi guard stay at his post. The interpreter said not every Iraqi is the same.

Contractors have had to give money to mosques for protection. Tough guys also will say, &#8220;Give me a job or I&#8217;ll kill you,&#8221; and the contractor obliges with employment.

Insurgents, meanwhile, have threatened the entire town, the sanitation official said. They left letters telling everyone to stop construction over the holy month of Ramadan, or their families would pay.

Gomez uses humor to get through these things. And there were many things. He has seen &#8212; and fixed &#8212; schools where the children defecated on the bathroom floor because there was no running water.

The basics of engineering provide a less visual problem. The Army had to translate the plans of Arab engineers first into normal Arabic from scientific Arabic, and then into English, then maybe into English engineer speak.

He also was annoyed at the way the U.S. government dealt with money. It took six layers of bureaucracy before the money left Uncle Sam&#8217;s coffers and reached his projects, Gomez said, and most of them were in the form of big contractors. He feared the amount of money they sucked off before he ever saw a cent. Gomez uses local, yet reliable, contractors to cut costs.

Before the Wednesday rush, Gomez had pointed to a figure on a spreadsheet to explain the difference between in-hand and earmarked money.

But for now, the figure was just liquid crystal digits on his laptop.

Spc. Jeffrey Jackson counted the money and slapped it down before the locals in crisp, green stacks. He would yell whenever there was a scuffle.

An interpreter said three out of 10 claims were fraudulent, the work of scammers or terrorists in search of easy money, and the claims required scrutiny.

Enter Palani. The lieutenant spoke with the Sudanese man with no left foot and no money and whom he believed.

Ibrahim was downcast at the ambiguity of the fate of the money. He had asked the lieutenant to tell him truthfully if he would see it. Ibrahim said it was hard on his nerves.

He hadn&#8217;t seen his children in 17 years. He wanted to know whether he should leave for home.

Palani wanted to do something for the man until the next Wednesday visit. But not a handout. Ibrahim never wanted a handout.

Palani had been trying for a prosthetic leg for Ibrahim. How about a wheelchair for now? Ibrahim looked at the folded thing. Yes, he knew how to use it. No, he couldn&#8217;t get it home. Palani arranged him a ride.

It was the least he could do, the lieutenant said.