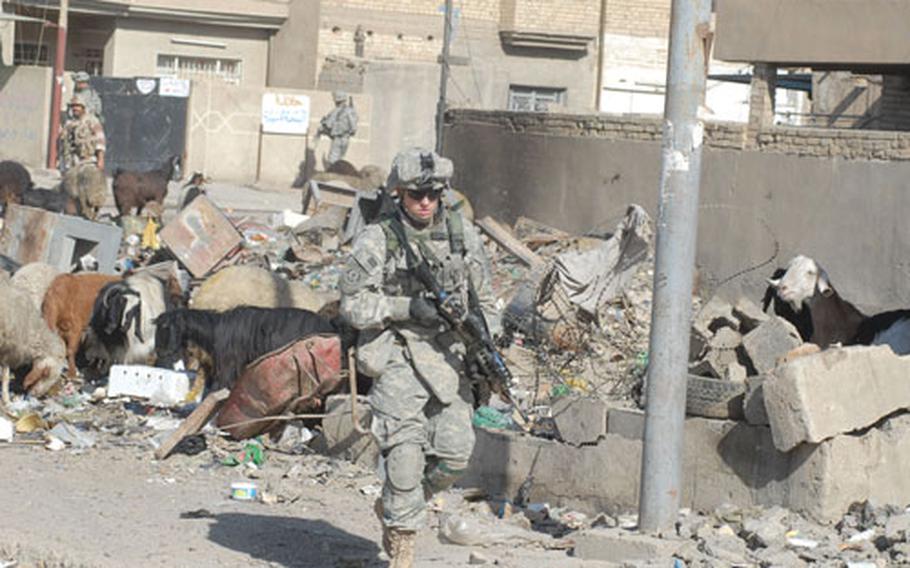 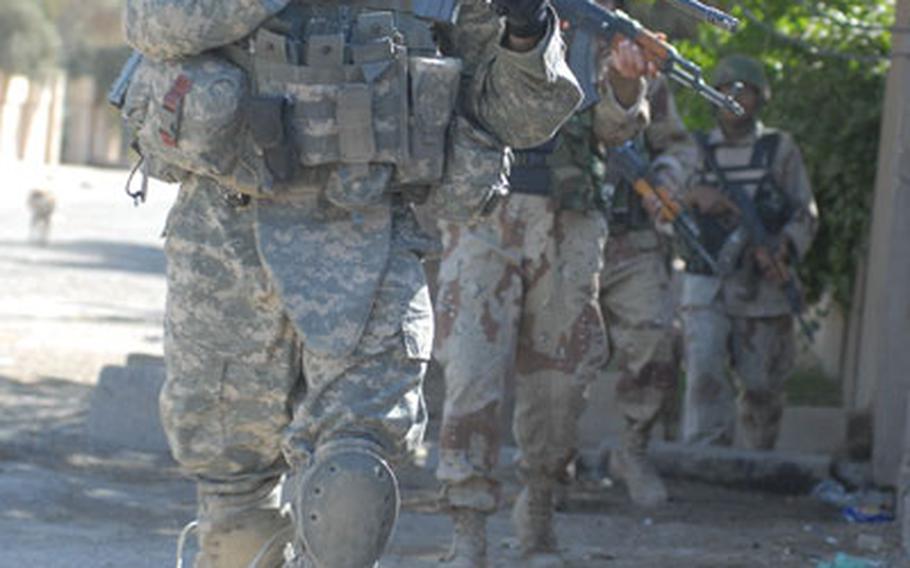 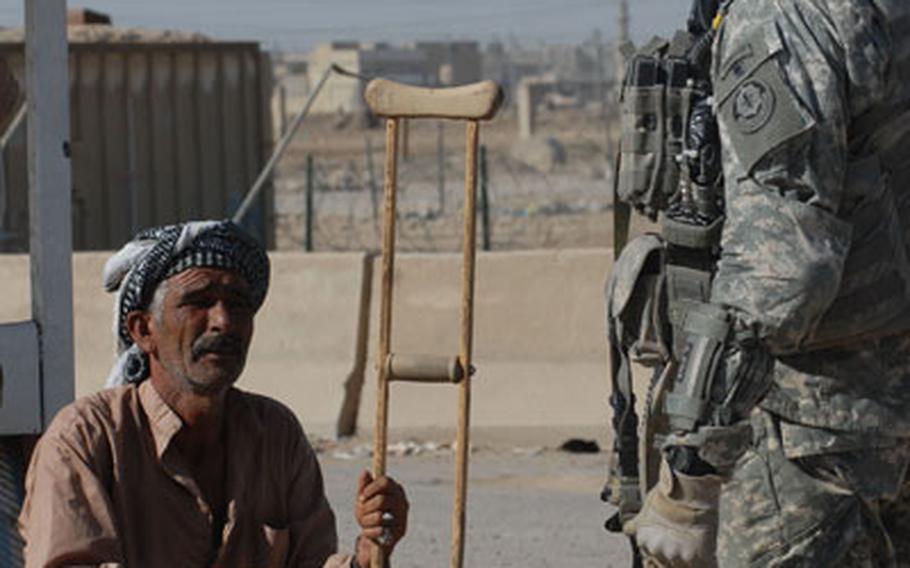 Think WWII and Stalingrad. Empty streets filled with debris &#8230; buildings with chunks torn out of them by high explosives and pockmarked by bullet holes &#8230; household effects scattered by looters &#8230; broken glass and twisted metal everywhere.

The outpost stands smack in the middle of one of Baghdad&#8217;s bloodiest sectarian divides. On one side of the base there&#8217;s an empty Shiite neighborhood. On the other side, an empty Sunni suburb. Most residents were driven out by the fighting that raged until Company E, 2nd Squadron, 2nd Cavalry (Stryker) Regiment went on an insurgent killing spree, shooting dead or blowing up 50 enemy fighters in September and October.

These days a measure of calm has returned to the deserted streets, and the Army is working to establish regular Iraqi army and Iraqi National Police patrols and checkpoints in the area. But when Company E patrols here, soldiers are alert for snipers, who, until recently, fired on troops the moment the soldiers left the relative safety of the base.

On Wednesday, 3rd Platoon troops and Iraqi army soldiers mounted a patrol through the formerly Shiite parts of the sector.

After linking up with the Iraqi soldiers at the base, they set out on foot, finding homes and streets deserted for several blocks. These were houses where insurgents took cover during previous attacks, so soldiers stayed on their guard.

But it wasn&#8217;t long before the patrol reached the edge of the devastation, marked by some children collecting berries from a fruit tree. Soon the soldiers were in a market street surrounded by more children asking for sweets.

First Lt. Christopher Turner, who led the patrol, talked to shopkeepers about electricity, water and sewage and the performance of the National Police, who man a checkpoint nearby. Some people asked if it was safe to return to their houses near the outpost.

&#8220;Tell them we (destroyed) al-Qaida (here) and it&#8217;s safe to move back,&#8221; Turner told his interpreter, adding that people should stop by the base and tell the Americans before they move back in.

It was the first time the Iraqi army patrolled the neighborhood, he said.

&#8220;The way the people accepted the IA (Iraqi army) in that area was also good. That is the case in every neighborhood we bring the IA into,&#8221; Turner said.

Next stop was the National Police checkpoint, where Iraqi soldiers and police officers talked among themselves.

&#8220;It&#8217;s a good patrol getting the Iraqi army and National Police together. They are talking about security in the area between themselves,&#8221; Turner said.

Two nights later, 2nd Platoon walked the streets of the formerly Sunni neighborhood, lit up by the eerie glow of a full moon. Its mission was to investigate an alleged torture chamber in one of the abandoned houses.

&#8220;They had it set up with lookouts all over the place, signaling when they saw us coming. They had IEDs (improvised explosive devices) at intersections and triggermen watching them to slow us down. Further in, they had places where they would meet and push out to defend the area.&#8221;

Spc. Avealao Milo was killed by a sniper here on Oct. 4. Geressy said Milo died instantly after he was struck in the neck by the opening shot when about 25 insurgents attacked 1st Platoon. The platoon was guarding the flank as soldiers from 3rd Squadron, 2nd Cavalry (Stryker) Regiment cleared the neighborhood house by house, he said.

What the enemy didn&#8217;t count on was that 2nd Platoon was also in the battle, Geressy said.

Cpl. Christopher Coalter, 26, of Millbank, S.D., a sniper, recalls a tough battle in which he and two other soldiers killed three insurgents in the street.

The battle broke the back of al-Qaida in the area, Geressy said.

At the torture house, soldiers cleared the building room by room. In one, they found a large knife and bone fragments. Then a report came in that surveillance cameras had spotted four people following the patrol. The platoon set up a defensive position on rooftops and snipers scanned the darkness for signs of an attack.

But after a long wait, the only option was to go into the streets and head back to Blackfoot on high alert. The walk home was a nervous one, but the suspected insurgents had disappeared into the wasteland.