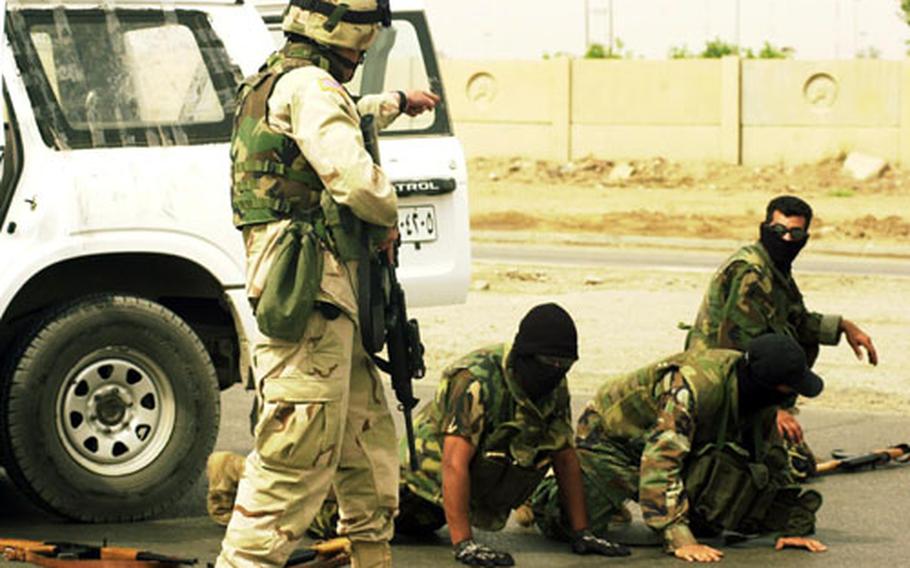 Soldiers say that while they wear uniforms, the enemy doesn&#39;t and could be anyone. A 1st Cavalry soldier makes Iraqi Civil Defense Corps members disarm and lie down until he can verify who they are after the ICDC personnel showed up just after a mortar attack on U.S. soldiers. There are too many incidences when Iraqis in ICDC or police uniforms have fired on them, soldiers say. (Terry Boyd / S&S)

BAGHDAD &#8212; Some fight. Most run. Aside from concentrations of insurgents in Fallujah and militias in Najaf, U.S. soldiers rarely encounter an enemy willing to stand and shoot it out.

In interviews with 1st Cavalry Division soldiers and officers working the urban or rural areas around Camp Victory North in northwest Baghdad, Americans tend to divide insurgents into those who have little will &#8212; and less ability &#8212; to fight, and those who are resourceful and ruthless.

But at least part of that perception is based on the setting. The same enemy tends to be more aggressive in urban warfare, more vulnerable in rural areas.

In Baghdad&#8217;s densely populated neighborhoods, U.S. troops say they start with a big disadvantage: They wear uniforms, while it&#8217;s nearly impossible to tell who&#8217;s friendly and who&#8217;s not. The rule of thumb, soldiers and officers say, is don&#8217;t trust anyone who&#8217;s not American, British or Coalition. That goes for Iraqi Civil Defense Corps members, many of whom quit the corps or defected rather than fight in Najaf and other hot spots.

Whomever they&#8217;re fighting, the urban setting is far more dangerous and limiting for soldiers who rarely see the enemy, and rarely have a clear shot when they do.

The enemy that 1st Cav soldiers are fighting now in urban Baghdad is one with quickly evolving tactics and strategies, &#8220;a hell of a lot of sophistication,&#8221; said 1st Lt. Nicholas Bradley, a Company A platoon leader for the 91st Engineers.

In the last few weeks, terrorists have shown &#8220;a hell of a lot better tactics than the average Joe we were used to dealing with,&#8221; Bradley said. It&#8217;s the kind of enemy who will lay a roadside bomb, knowing explosives disposal teams will come in, then hit the area with preranged mortars.

His soldiers have seen a series of a particularly sophisticated type of bomb concealed in concrete blocks. The bomb constructions are so uniform, Bradley said he suspects they may be the work of one person.

It&#8217;s all part of a multilevel chess game where soldiers adjust to terrorists&#8217; tactics, then the terrorists adjust to the soldiers&#8217; adjustments.

On April 11, Scouts shot it out with 25 uniformed insurgents in a palm grove, killing or capturing them all.

&#8220;They had AKs, RPKs, RPGs. They could have [messed] us up,&#8221; he said. But most fled after firing a few stray shots, Smith said. Smith theorizes that many factors differentiate urban and rural warfare. Urban terrorists may be more resolute in that they&#8217;re closer to the people who finance attacks, he said. Insurgents operating in rural areas away from &#8220;the guys pulling the strings may find it easier to cut and run&#8221; than their counterparts on the streets of Abu Ghraib and Amariyah,&#8221; he said.

But mostly, urban fighters have a tactical advantage in that U.S. troops can&#8217;t shoot back before &#8220;they bleed right back into the market,&#8221; Smith added.

If insurgents decide they want to attack troops in the open, they&#8217;d better be ready for sustained firefight, &#8220;and I would not plan for a sustained firefight with U.S. forces. We have a much more clear-cut fight out there,&#8221; he said.

If there is a unifying element among the U.S. forces, say soldiers and officers, it&#8217;s a total lack of respect for insurgents, who soldiers label as cowards and terrorists.

When American troops do capture insurgents, they find enemy fighters rarely have the courage to admit who they are or what they did. His soldiers have never grabbed an insurgent yet who didn&#8217;t say he was innocent, Edmonds said.

Most of all, Scouts hate criers, Smith said. The uniformed insurgent who is shooting at them one minute, and crying like a baby the next when captured, &#8220;swearing he didn&#8217;t do anything,&#8221; Smith said.

Of course the insurgents are losers, said Sgt. Aaron Bibb, an MK 19 gunner with Company D.