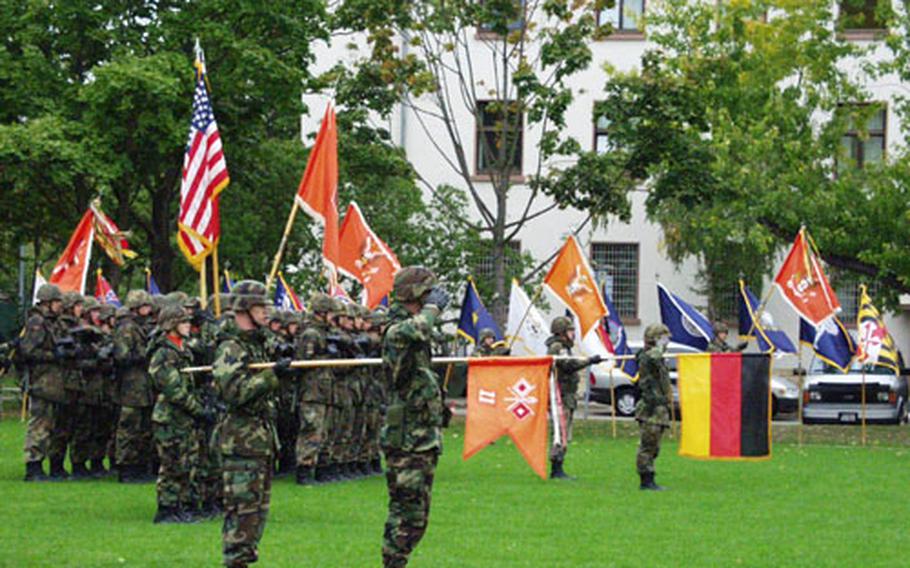 Platoons of both U.S. and German troops took part in the hour-long cermony held behind the 5th Signal Command Headquarters on Funari Barracks in Mannheim, Germany. (Rick Scavetta / S&S)

MANNHEIM, Germany &#8212; When Dick Kennedy drove onto Sullivan Barracks on Sept. 19, he hoped to see his beloved POW/MIA banner flying on the community flagole below Old Glory.

But base operations failed to notify military police to raise the black flag on National POW/MIA Recognition Day, one of six days during the year when it&#8217;s supposed to be put up.

Upon guidance from U.S. Army Europe and the 26th Area Support Group, the 293rd Base Operations staff directs the military police to raise such flags on special occasions, said Christine Gebhard, a base spokeswoman.

&#8220;On that particular day, no notification was received, therefore, the POW/MIA flag was not flown,&#8221; Gebhard said.

The black flag portrays a prisoner&#8217;s silhouette and the words &#8220;You Are Not Forgotten.&#8221; The government requires military bases to display the flag on National POW/MIA Recognition Day, the third Friday in September, plus five other patriotic observances: Armed Forces Day, Memorial Day, Flag Day, Independence Day and Veterans Day.

Veterans groups such as the Veterans of Foreign Wars stay closely linked with the observances of patriotic tradition, said Dean White, commander of the VFW&#8217;s Europe Department.

At times, bases have not complied with ceremonial remembrances, and may need reminding, White said, adding that &#8220;traditionally, post sergeants major make sure tradition is followed.&#8221;

This year, Kennedy said, he sent messages to other veterans on Sept. 18 asking them to check to see if the day honoring prisoners of war and those missing in action was being observed properly. Veterans went to several military communities to make sure the POW/MIA flags were up, and that base dining facilities displayed a ceremonial &#8220;missing man&#8221; place setting.

In Heidelberg, a veteran watching troops raise the U.S. flag saw the soldiers were without a POW/MIA flag and supplied them with his own, Kennedy said.

Some bases, such as Grafenw&#246;hr and W&#252;rzburg, raised the flag. Other communities, such as Wiesbaden and RAF Mildenhall, England, don&#8217;t need to make special observances because they have memorials where the POW/MIA flag is displayed daily, White said.

While Mannheim recognized the flag was not flown, base officials intend to make sure it&#8217;s raised next month on Veterans Day, Gebhard said.

White hopes that flag-raising and holidays are not lost on the community as just another day off. He stressed how important patriotic days are for Americans, to include the recognition those held prisoner and missing.