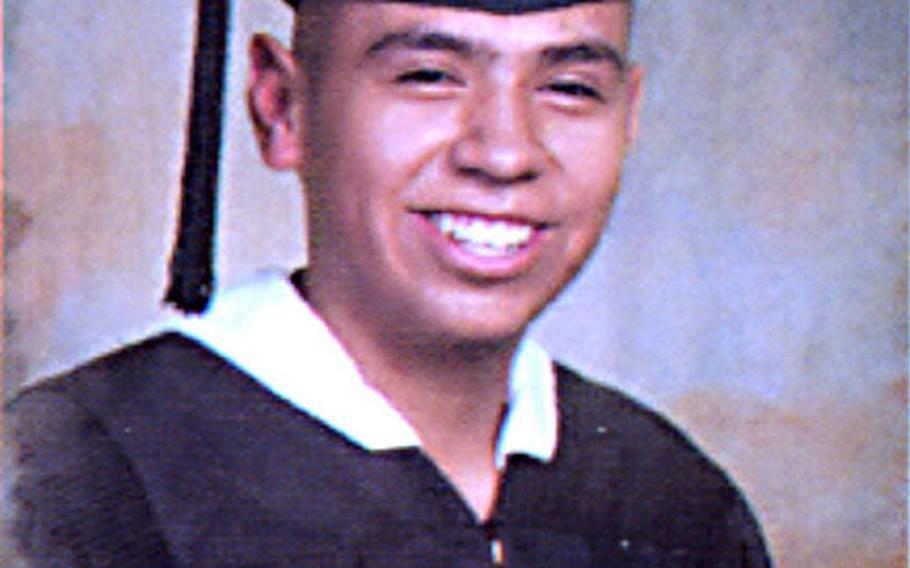 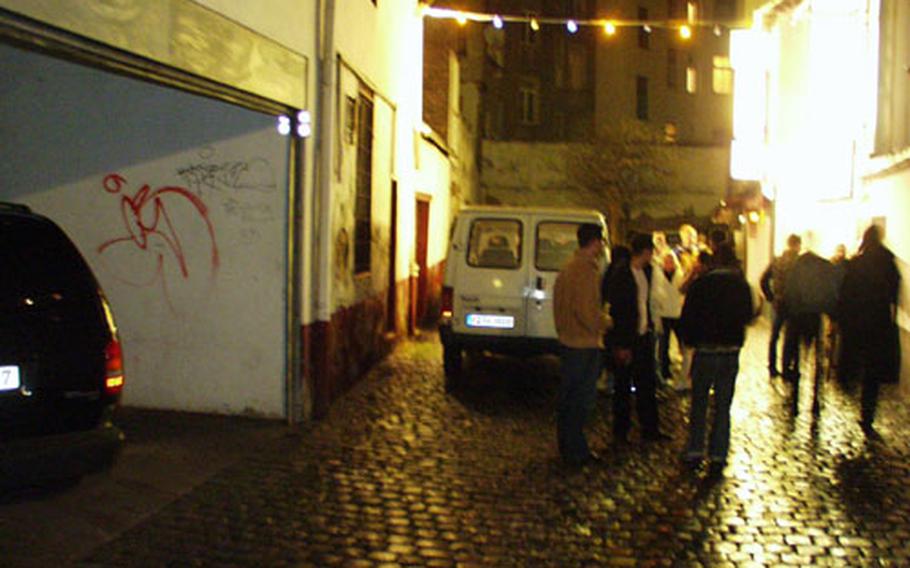 Pfc. Clint Lamebear, an infantryman stationed in Friedberg, Germany, died Nov. 16 in this garage beside pubs in Sachsenhausen, Frankfurt’s South End. Troops and family are still reeling from his death. (Rick Scavetta / S&S)

FRIEDBERG, Germany &#8212; On a recent rainy Friday evening at Ray Barracks, young infantrymen prepped themselves for a night on the town &#8212; shedding their uniforms for T-shirts and jeans and priming themselves with alcohol.

Squads of experienced troops sauntered from the barracks, back-slapping and laughing their way to waiting taxis, while new troops peered anxiously from their doorways, hoping to latch onto a crowd of fellow soldiers heading out to party.

The night was not unlike Nov. 15, when Pfc. Clint Cotton Lamebear, an 18-year-old Navajo from New Mexico joined four friends from 1st Battalion, 36th Infantry Regiment for a trip to Frankfurt&#8217;s pub district in Sachsenhausen.

Lamebear never returned to the barracks that night. Instead, he suffered a horrible death &#8212; beaten with a piece of lumber in a filthy garage.

The horror of Lamebear&#8217;s death stunned fellow soldiers and devastated his family.

A German man found the young soldier early Nov. 16, beside a parked mini-van. German police said Lamebear suffered massive head injuries. They found a piece of wood on a nearby rooftop. The garage, strewn with garbage and lumber similar to the murder weapon, sits across from two pubs along a shady cobblestone alley.

In his pocket, Lamebear carried a photo from an ROTC ball of himself in uniform with a high school sweetheart. To identify Lamebear, German police enlarged the photo to read his nametag.

The circumstances surrounding Lamebear&#8217;s death have yet to play out in a military courtroom. The suspects face initial court hearings in mid-January, Army officials said. Lamebear&#8217;s family plans to attend the expected court-martial sometime in February.

Meanwhile, soldiers at Ray Barracks still appeared shocked and confused a month after the incident.

Kieselbach, who arrived in Friedberg the day before Lamebear&#8217;s death, was told by his sergeants to stay on post for 30 days, he said. The rule, for new soldiers not to leave base for a month, is commonly broken, troops said.

Kieselbach trusts only his roommate, 19-year-old Pvt. Roger Rozier of Atlanta, and a small group of other newcomers, he said. Another trusted companion, Pfc. Charles Latham, 18, of Sanford, Fla., arrived days before Lamebear.

Latham recalled seeing Lamebear while processing into the unit, but he did not know him, he said. Still, Latham said, word of Lamebear&#8217;s death shocked him.

All the soldiers in the infantry battalion, many who did not even know Lamebear, attended his memorial service at Ray Barracks chapel. Since the incident, sergeants told specialists living in the barracks to look after new privates, troops said.

Billiman, 22, grew up just a stone&#8217;s throw from Lamebear in New Mexico, he said. He said he understands how difficult it can be for a Navajo to bond with non-Indian troops. When Billiman arrived in Friedberg two years ago, he spent his first weekends drinking quietly in his barracks room.

During his first venture downtown with fellow troops, Billiman was left alone in an unfamiliar area and had to call a cab to get back to the base, he said.

While troops reeled from the incident, Lamebear&#8217;s family did its best to honor him amid confusion, sadness and disbelief.

Lamebear&#8217;s mom, Kristen June, is absolutely devastated over the loss of her eldest son, Bonars said, so much that she declined to be interviewed. Each Saturday, Lamebear religiously called home to his mother.

That Sunday, soldiers arrived at his mother&#8217;s home to say he was dead, but offered few details. Four days after Lamebear died, his family learned from a televised news report that he was beaten to death, which still has his mother upset, Bonars said. And she is still waiting for some of his belongings.

Lamebear had a brother Clifford, 17, and a sister Erica, 20. His grandmother, Lorraine June, who helped raise Lamebear, is also mourning.

Bonars last saw Lamebear in mid-October. While on leave, the young private stopped at her home outside Fort Leonard Wood, Mo., before going on to New Mexico. While at home, Lamebear worked for a local recruiter &#8212; talking to other in Navajo teens about joining the military.

Bonars, a former Army medic stationed at Landstuhl, said her sister did not want Lamebear to become a soldier. Bonars and her husband, also a former soldier, supported Lamebear joining the Army.

Family buries slain soldier the day after his 19th birthday

Instead of celebrating Clint Lamebear&#8217;s 19th birthday on Nov. 24, his family was preparing for his funeral.

Lamebear, beaten to death in Frankfurt, Germany, was to be buried the next day.

That week, Lamebear&#8217;s family packed into four cars and made the long drive to Albuquerque, N.M., where they picked up his body. Police officers, some of who are Army reservists, escorted the fallen soldier and his family back to Church Rock, a rural suburb outside Gallup, where Lamebear grew up.

Tucker, who has a son in the Army about the same age as Lamebear, agreed to an interview with Stars and Stripes, but 1st Armored Division officials canceled the meeting. Division and V Corps officials said they fear showing public response from commanders while judicial proceedings are underway. In addition, the command withheld the suspects&#8217; hometowns, a fact often released once a soldier is charged.