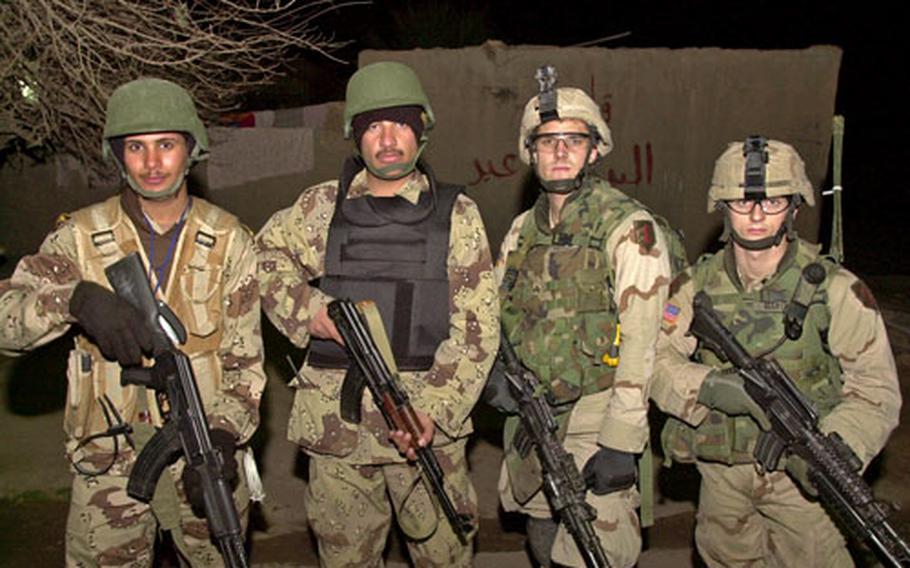 Sgt. Daniel Veach, second from right, and Spc. Michael Martin, right, pose with Iraqi counterparts after a long night of seaching houses in Ad-Dawr, outside Tikrit. ()

Sgt. Daniel Veach, second from right, and Spc. Michael Martin, right, pose with Iraqi counterparts after a long night of seaching houses in Ad-Dawr, outside Tikrit. () 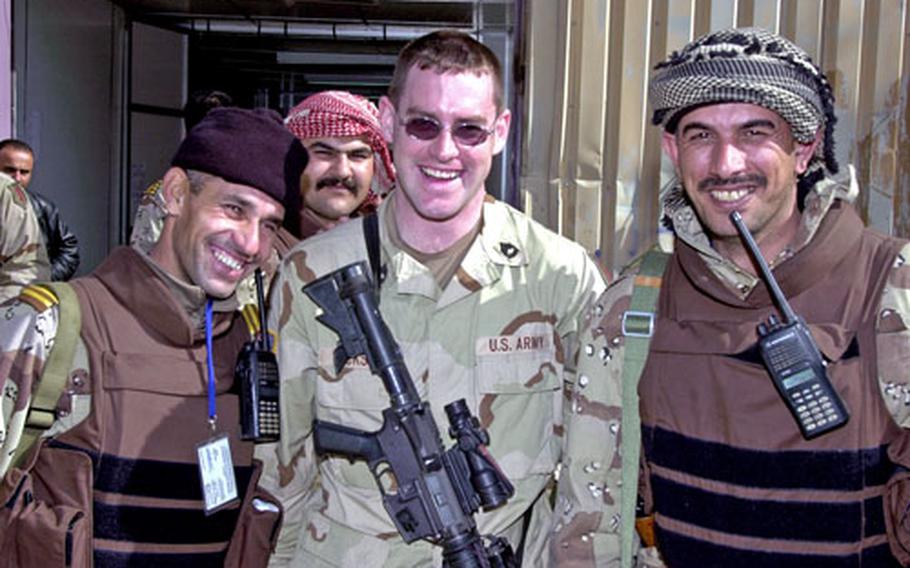 Jackson poses with some of the Iraqi troops he&#39;s been training for almost a year. () 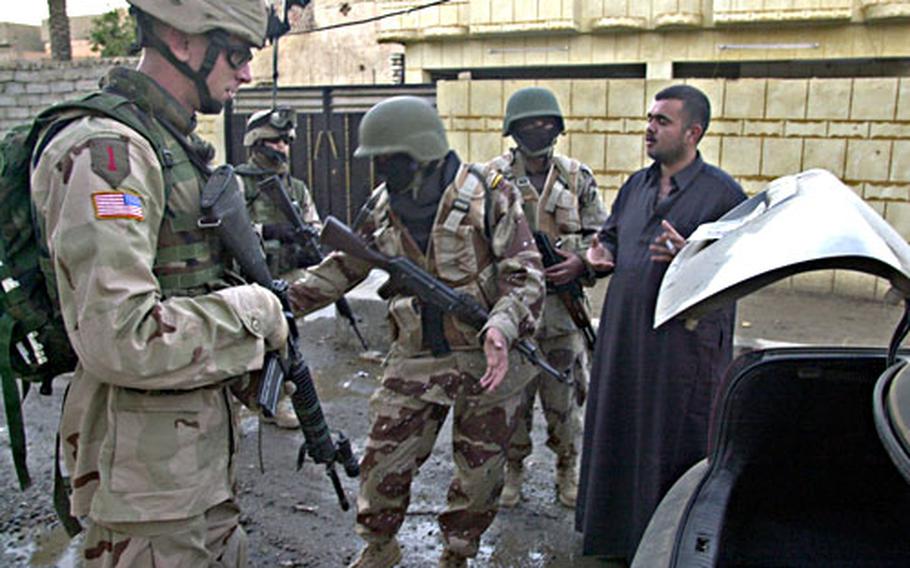 Staff Sgt. Clifford Jackson, left, at Forward Operating Base Wilson, Iraq, never wanted to work with Iraqi Army troops. “I wanted to be with my guys,” said Jackson, a scout. But helping build the Iraqi forces is his insurance policy, making sure he won’t have to come back again, said the 28-year-old soldier. (Photos by Terry Boyd / S&S) 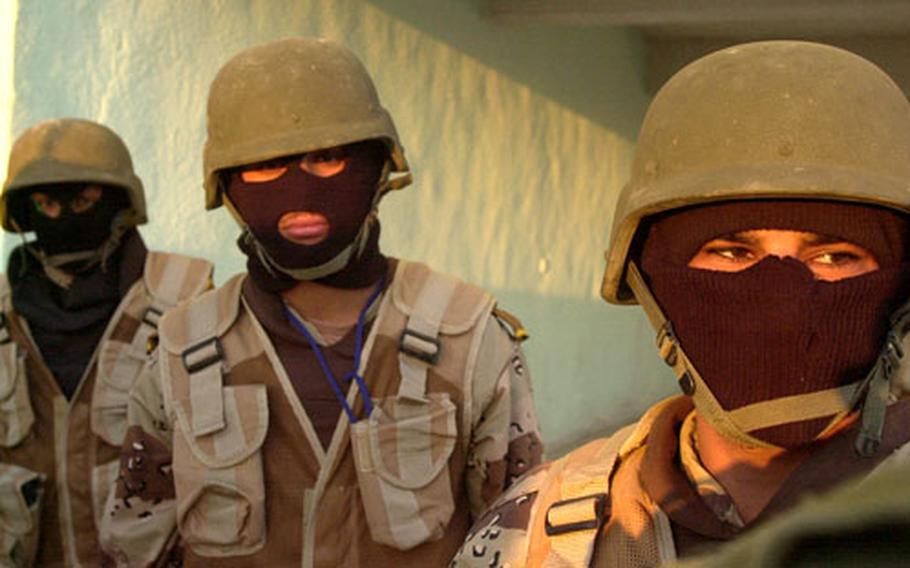 Iraqi Army soldiers take a substantial risk joining up, including bombings at recruitment stations. Most soldiers wear masks when on missions to keep their identities hidden. ()

FORWARD OPERATING BASE WILSON, Iraq &#8212; Sgt. 1st Class Clifford Jackson &#8212; and U.S. soldiers like him across Iraq &#8212; may be the best hope for soldiers who never want to spend another year in the desert.

Here, otherwise cynical soldiers are quick to say that while the local police are worthless, the 235 Iraqi army soldiers of Company D, 201st Battalion, are real soldiers and getting better, thanks largely to people such as Jackson.

In a war where no one can even say exactly who the enemy is, the biggest unknown may be when &#8212; if ever &#8212; Iraqi soldiers will become a fighting force that can take the stress off American soldiers.

On Thursday, U.S. Defense Secretary Donald Rumsfeld told U.S. troops during a surprise trip to Mosul that they will be able to leave the desert once Iraqi forces are strong enough to maintain security.

However, Gen. Richard Myers, chairman of the Joint Chiefs of Staff, recently told Congress that only about one-third of Iraq&#8217;s 136,000-person security force is capable of fighting insurgents.

That&#8217;s not the case at FOB Wilson, Jackson said, and the only people he has to prove it to are fellow soldiers.

Jackson predicted Iraqi soldiers could be taking the initiative on raids and patrols in a year, with U.S. soldiers in the background.

Iraqi soldiers are focused and reliable, he said. Over the last year, U.S. soldiers helped them improve marksmanship. The Iraqis have higher morale. They&#8217;re more disciplined in everything they do.

During a rocket attack on FOB Wilson on Wednesday, Iraqi soldiers not only spotted the launch, they placed it within 100 meters of the grid pinpointed by base ground radar, Jackson said.

Local soldiers also have little in the way of a rank structure or chain of command because they&#8217;re friends with all who live outside FOB Wilson in Mujama or Ad-Dawr.

But they&#8217;ve proved dozens of times they&#8217;ll fight, soldiers told Stars and Stripes. And they have come a long way, considering how bad relations were early on.

Just after the 1st ID arrived in 2004, Iraqi soldiers got a tip one night and went after &#8212; without notifying the Americans &#8212; a man suspected of taking potshots at them, Jackson said. A team of Special Forces soldiers and civilian operatives were, by coincidence, observing a neighboring house. In the confusion, the Special Forces team killed five Iraqi soldiers, mistaking them for insurgents. In the aftermath, one-quarter to one-third of the Iraqis quit. A few weeks later, two Iraqi soldiers were kidnapped and executed.

Episodes like that left Jackson feeling he was in the middle of a nightmare job he never wanted.

But Iraqi soldiers say they still need greater capabilities. The Iraqi army won&#8217;t be able take over from the United States until it is equipped like the Americans, said Staff Sgt. Alaa Akram, one of several 201st soldiers who speak English. The Iraqis won&#8217;t be able to replace the Americans till they have tanks, aircraft and communications equipment, he said.

Currently, there is &#8220;the beginning&#8221; of a mechanized infantry brigade, but no plans to give the Iraqi heavy weapons, said Maj. Steve Maranian, Iraqi security forces coordinator at 1st ID headquarters at Camp Danger in Tikrit.

In January, the New York Times reported that $300 million in Iraqi government funds is missing, money earmarked for the purchase of weapons for a new Iraqi armored brigade.

Just as important as weapons, Akram added, is that the central government establish &#8220;strong law.&#8221; Right now, the Americans are the law, especially Jackson.

Wednesday, a rotund, fireplug of an Iraqi officer stormed into Jackson&#8217;s office, demanding Jackson discipline a soldier who had smashed up a truck. But Jackson is days from returning to the 1-4 Cav headquarters at Schweinfurt, Germany. &#8220;What are you going to do when I&#8217;m gone? E-mail me?&#8221; Jackson asked.

Some 1-4 Cav troops see the soldiers coming into the Iraqi army now as superior to those who joined when it was called the Iraqi Civil Defense Corps. During last October&#8217;s fighting in Samarra, Veach said he saw elite Iraqi army soldiers that were &#8220;at the point that our guys are getting to now.&#8221;

Ultimately, there is only so much the Americans can do, Akram said. The difference between his men and U.S. soldiers is something far more abstract than weapons or training.