GIs in Iraq make most of free time 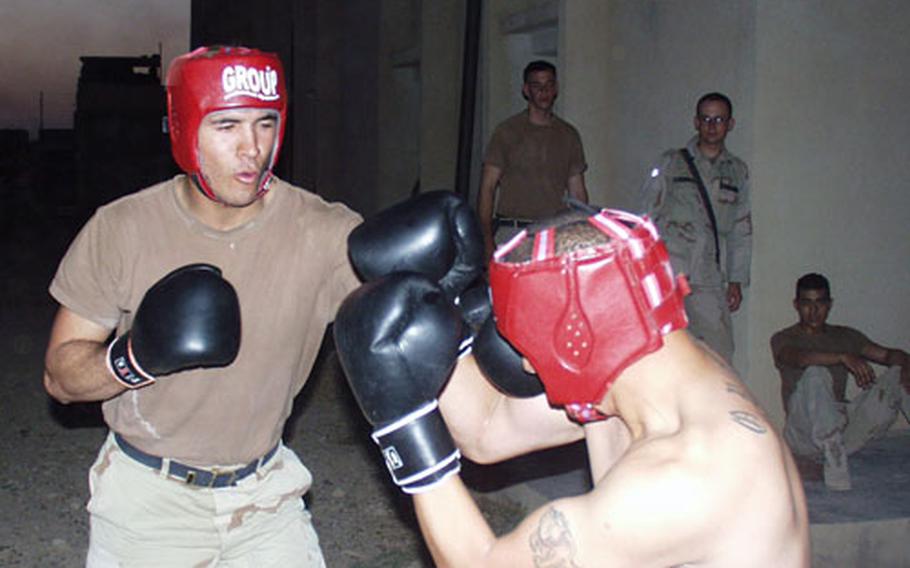 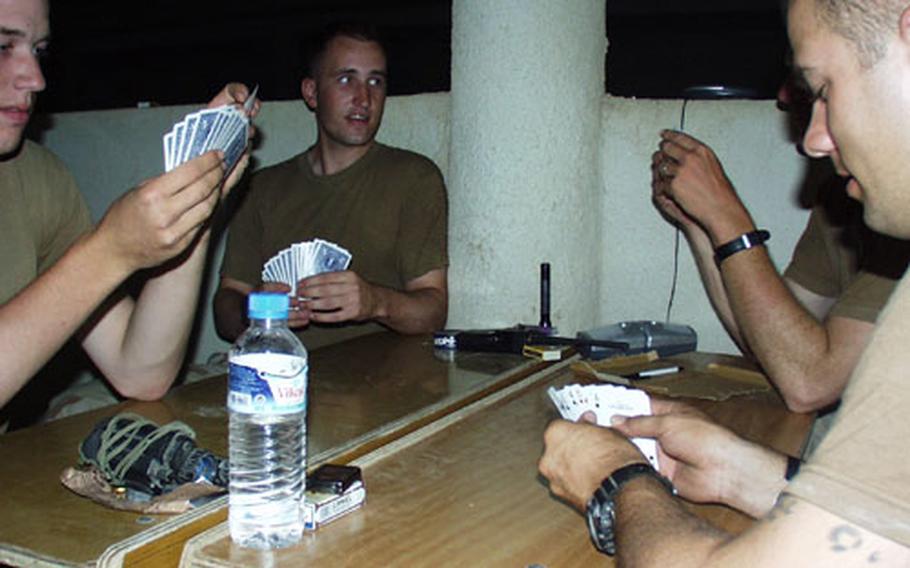 Soldiers who like playing cards don’t let issues such as electrical power outages get in the way. Pfc. Matt Freeburn, left, and Pfc. Phil Knight teamed up against Lt. Joel Ellison and Sgt. Shane Wilson in a game of spades. When the electricity went out, the players brought out flashlights. (Kent Harris / S&S) 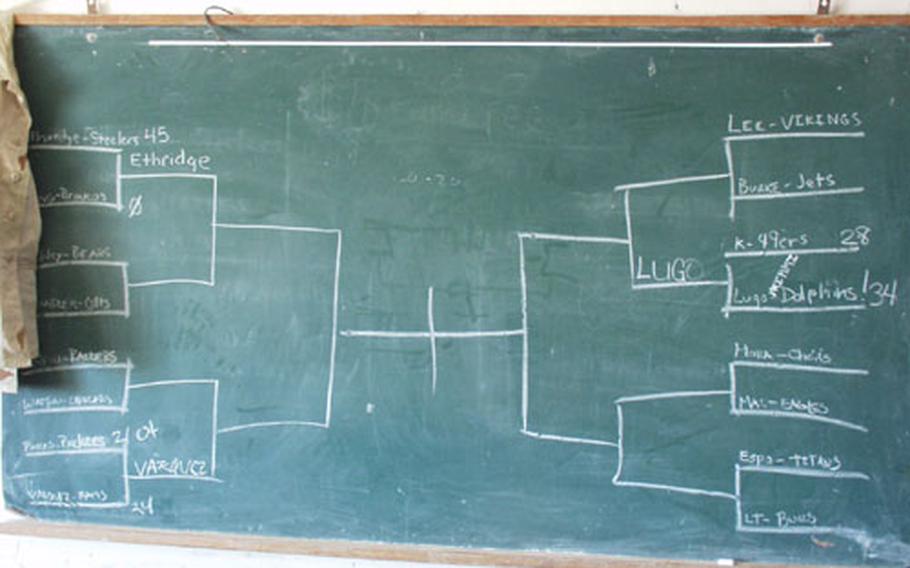 Living in a school does have some advantages, including the availability of chalkboards to keep track of tournaments. This one could determine who the top video football player is in Company C, 1st Battalion, 508th Infantry Regiment. (Kent Harris / S&S)

The soldiers in the 1st Battalion, 508th Infantry Regiment, based in Vicenza, Italy, are not exactly sitting around Iraq with nothing to do.

Still, every once in a while they&#8217;re given some down time. And doing nothing is an option then.

Many choose to take up activities to stimulate the mind or body. Or, if you buy into the theory that video games help reflexes and coordination, a little bit of both.

A good part of Hall&#8217;s squad is sitting on a concrete slab, sitting in a line, eyes glued to the small screens in their hands and fingers clicking away.

A few other members of Company A pass by, muttering something about geeks.

Not all the toys, depending on your definition.

A few steps away, there&#8217;s a set of weights placed in the center of the U-shaped building that forms the heart of the compound.

Al-Jehani says he&#8217;s not trying to bulk up. Just maintain. Several soldiers in the company do a lot of weight lifting when they&#8217;re at their home base in Vicenza.

Still, there are more than a few soldiers willing to work up some more sweat by lacing up some boxing gloves and donning protective head gear.

Staff Sgt. Rafael Ortiz appears to be king of the ring on this night. He takes on five other boxers &#8212; though not at the same time. None of them, Ortiz included, has much boxing experience. That might make it a little more interesting, though, because styles can be pretty unorthodox.

A crowd, including the company&#8217;s first sergeant, gathers to watch as the boxers trade punches while trying to avoid slipping on the uneven ground.

Michael Stribling, the company&#8217;s top NCO, obviously enjoys watching the sparring. But he says he likes to spend most of his free time reading.

He&#8217;s able to tune out a lot of background noise. His five kids back in Vicenza are good training for that.

When it gets dark, the lights go on. Those who aren&#8217;t reading are often writing. You&#8217;ve got to write letters to get letters, they say. Some write girlfriends or family members almost daily.

The erratic electricity situation in Iraq causes some problems. So, when the power goes off, the flashlights come out. Sgt. Shane Wilson and Lt. Joel Ellison don&#8217;t let a blackout stop them from defeating Pfc. Matt Freeburn and Pfc. Phil Knight in a game of spades.

At the nearby village of Jar Silah, the members of Company C seem to take their football seriously. Video game football that is.

Staying in a school complex like their Company A counterparts, soldiers use a chalkboard to sketch out the pairings for a tournament. Sgt. Racean McMillan and Pfc. A.J. Ashley are playing against each other, while most of the other members of their units try to get some sleep after being out for most of the night on a raid.

Sleeping is probably the most popular activity to engage in. Problem is, it&#8217;s not always easy. The heat during the day makes it uncomfortable at best, impossible at worst.