GIs in Iraq help to build a government, one tedious local meeting at a time 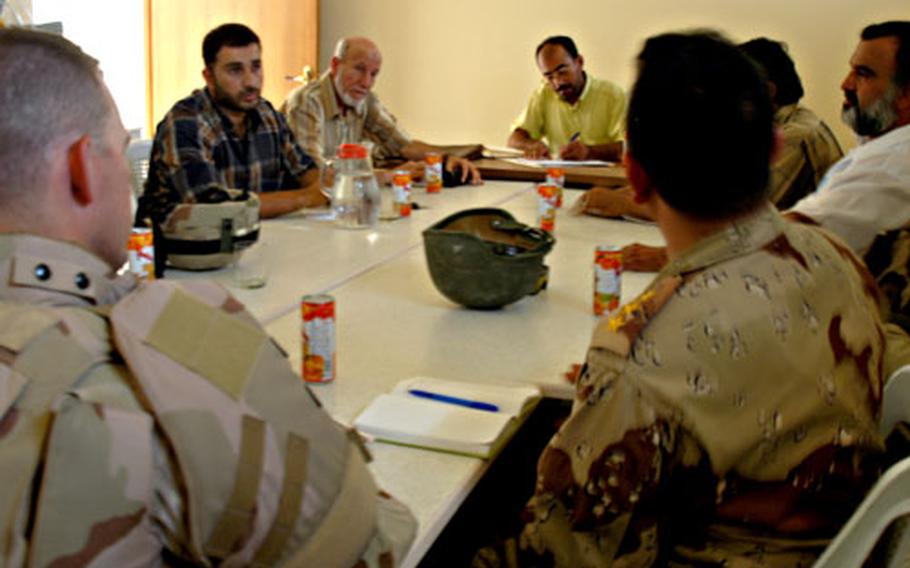 First Lt. Jason Warren meets Tuesday afternoon with the Neighborhood Advisory Council in Khadra, an area in western Baghdad. Six men from the council came, as did a captain from the Iraqi army. (Teri Weaver / S&S)

First Lt. Jason Warren meets Tuesday afternoon with the Neighborhood Advisory Council in Khadra, an area in western Baghdad. Six men from the council came, as did a captain from the Iraqi army. (Teri Weaver / S&S) 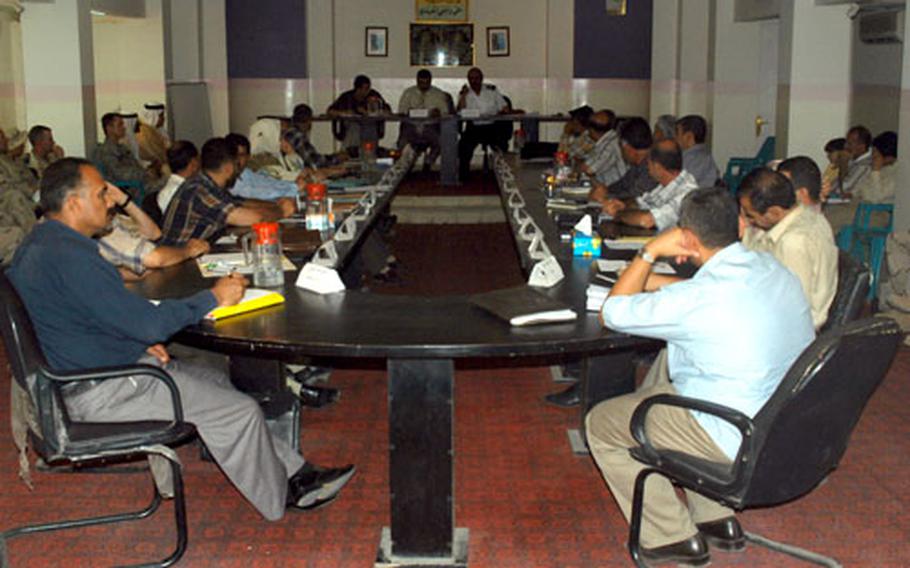 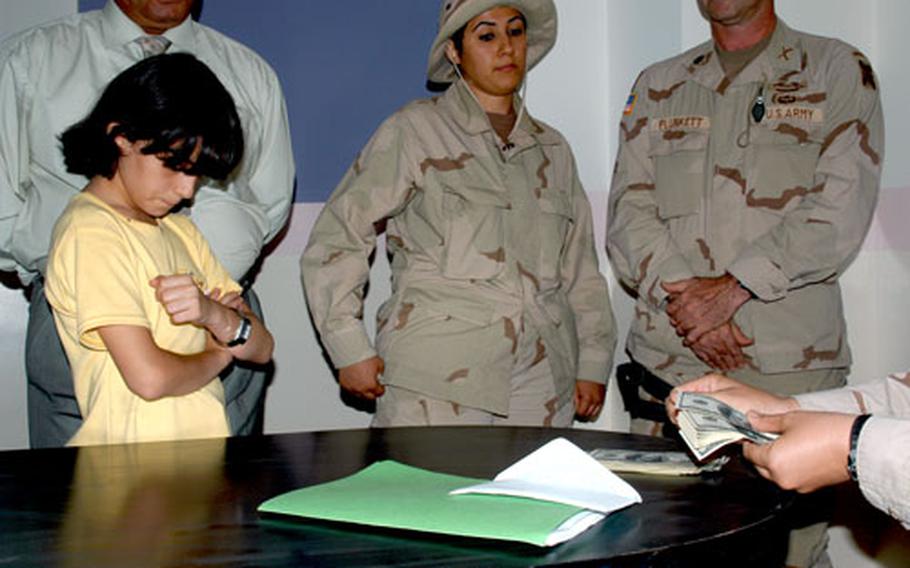 An Iraqi girl watches as a U.S. soldier counts out $4,000, a consolation payment after the fifth-grader’s mother was killed during a gunfight with insurgents. The girl said she’s doing worse in school, because her mother isn’t there to help. U.S. military officials are unsure who killed the woman. (Teri Weaver / S&S)

BAGHDAD &#8212; First Lt. Jason Warren is another American trying to tutor Iraqis on ways to defend and run their country.

But instead of teaching battlefield tactics, this 31-year-old certified public accountant is trying to lead a neighborhood council through the bureaucratic frustrations of running a local government.

He wants council members to catalog and fix broken sewers, water lines and roads. He wants them to control the trash that covers curbs and hides homemade bombs in their Khadra neighborhood. And he really wants them to pass along tips about the insurgent supporters he suspects are living among them.

The Americans want the Iraqis to identify, prioritize and eventually pay for the improvements, and they want them to start that process now, he said.

Progress has not been easy, he said. In the past few weeks, he&#8217;s seen a car bomb blow out the windows of a newly renovated school. A repaired sewage pump is not working because a local leader took its generator for himself and his neighbors.

The Iraqis have complaints, too. They worry about Iraqi military and police carrying out personal vendettas rather than making informed arrests. They worry about becoming targets themselves. One neighborhood leader was gunned down in front of his house a few weeks ago.

At a larger, district-level meeting in Mansour, 20 council members gathered from nearby neighborhoods, including Khadra. Warren and a group of his counterparts and bosses sat on the edges of the meeting with interpreters to listen in on the wrangling.

It sounded like so many local government meetings, full of complaints about traffic, sewage, trash and crumbling streets, until they got to the agenda item that included a young girl and a wad of hundred dollar bills.

Her mother had been killed three months ago. Her father, Mohammed Abid Al-Majeed, was driving his family home from a party when he rounded the corner and drove into a crossfire: insurgents were firing grenades at U.S. soldiers, and the Americans were fighting back. When Mohammed&#8217;s car entered the scene, the insurgents used it as shelter, military officials said.

Mohammed&#8217;s wife was hit in the thigh and later died, according to Master Sgt. Linda Litchfield, whose job includes paying out condolences when people or property are hurt by U.S. soldiers.

Litchfield didn&#8217;t know the daughter would be the one to receive the money. The fifth-grade girl, prompted by her father, tried to recite a speech about her loss, about how her grades were failing because she had lost the person she once studied with each night.

But the girl quickly broke into tears. Litchfield, too, teared up.

The Iraqi councilors paused while the little girl wept. But they went back to talking among themselves while the father refused the money. Litchfield apologized for the death and insisted on the payment, saying he should take it for his daughter.

The man agreed through his own tears, still accusing the Americans of paying less money than they would for a dog.

Litchfield slowly counted out the $100 bills, put it in an envelope so no one would need to touch it, and gave it to the little girl. She hugged the child; the girl did not hug back.

The councilors resumed the meeting. One mentioned holes in sewage pipes on his street, and a U.S. officer motioned to his interpreter to write down the location.