GIs in Iraq have mixed reactions on halt to anthrax shots 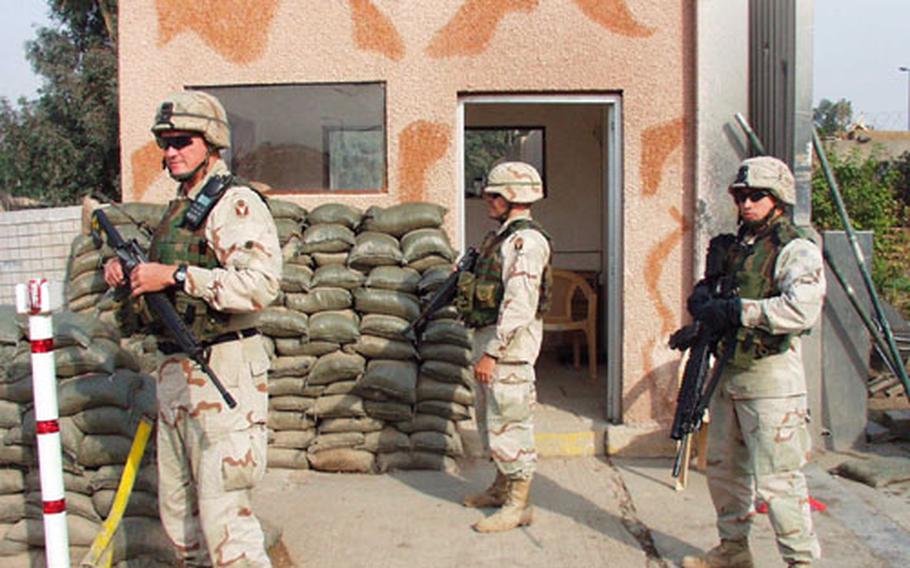 BAGHDAD, Iraq &#8212; Troops in jittery Iraq have plenty to turn over in their minds &#8212; mortars, missiles and the general threat of mayhem among them.

But one thing the military assured them they would have some protection against was the specter of anthrax: Before deploying here, each and every U.S. soldier had to take an anti-anthrax vaccine.

But after U.S. District Judge Emmet G. Sullivan issued a ruling Dec. 22 that ordered the military to stop requiring soldiers take the vaccine, the word in the desert is mixed. Some troops believe the vaccine is indeed a needed Kevlar against the disease-cum-weapon and are thankful for it. A few are ambivalent, saying they would have chosen to take the serum, optional or not. And some greeted last week&#8217;s decision with a welcome sigh, with a shared distrust that the Pentagon&#8217;s claims about the vaccine are not backed by science.

&#8220;I think it should be optional for the military,&#8221; said Sgt. Ray Poole of the Florida National Guard during his sentry shift in front of a convention center. &#8220;If the private sector can turn down the serum, we should be able to. As much as I appreciate the Army&#8217;s effort to check all the serums and what have you, I still put a little more faith in the private sector.&#8221;

Immediately following the judge&#8217;s order, the Pentagon announced it would still vaccinate troops who agreed to the precaution. David Chu, undersecretary of defense for personnel and readiness, reversed that.

The Pentagon&#8217;s general rebuttal to vaccine worries has been that it has been used for some 40 years and is approved by the Food and Drug Administration. However, a class action suit filed by six unnamed plaintiffs alleged that the military improperly uses the vaccine to fight airborne anthrax, rather than solely against anthrax contracted via skin exposure. Sullivan pointedly agreed, charging the Defense Department used troops &#8220;as guinea pigs for experimental drugs.&#8221;

&#8220;I categorically reject the use of that term,&#8221; Dr. William Winkenwerder, assistant secretary of defense for health affairs, said during a press conference. Secretary of Defense Donald H. Rumsfeld denounced the judge&#8217;s interpretation as inaccurate.

Nonetheless, Winkenwerder said the Pentagon would comply. He also said that in 1970, the FDA approved the vaccine for use against all types of anthrax.

Attorneys on both sides will slug it out during a March hearing.

In Iraq, the nation the Pentagon most feared would unleash the deadly spores, some U.S. troops were suspicious.

Others now in the country reacted to the brouhaha without much heat.

So far, the U.S.-led coalition has announced finding no banned weapons in Iraq, but the Bush administration maintains former Iraqi leader Saddam Hussein had such weapons and was liable to use them.

A soldier with the Friedberg, Germany-based Company A, 1st Battalion, 36th Infantry Regiment, echoed some of the disinterest.

Another soldier with their unit, however, was relieved at the prospect of not seeing that needle again.

One of their fellow soldiers, though, said friends worry about the shots&#8217; affect on children.

Some people said that when they were taking the shots they were also trying to have children &#8220;and supposedly it causes birth defects in some people,&#8221; said Spc. Raymond Lee.

The Naval Health Research Center has previously reported &#8220;a possible relationship between maternal anthrax vaccination in the first trimester and higher odds of birth defects.&#8221; The national Centers for Disease Control and Prevention subsequently warned civilians against taking the anthrax vaccine if pregnant.

Because of such news, Poole and his fellow guardsmen in front of the convention center worry about the vaccine. Since last summer, only 10 troops have refused the vaccine &#8212; but about 400 refused between 1998 and 2001. All told, about 1 million troops have been vaccinated.

Hernandez said that during the first Gulf War, he ingested a regular regimen of pills to protect against biological weapons.