GIs get down in the dirt to prepare for operation 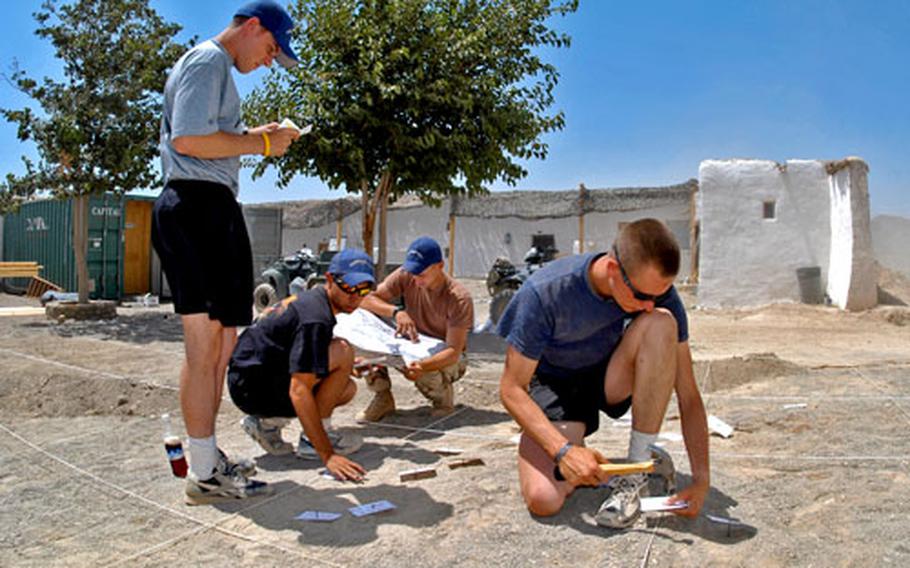 FORWARD OPERATING BASE SWEENEY, Afghanistan &#8212; Even with all of the Army&#8217;s high-tech gear and ability to use satellite imaging, many military operations kick off not on a computer, nor on maps, but rather in the dirt.

The operation was launched to find insurgents in south-central Zabol province who had been placing improvised explosive devices and mines on area roads.

A handful of the Vicenza, Italy-based soldiers spent much of the day setting up the dirt map, with one soldier laying a line of dirt with a front loader to represent a line of mountains while, others measured out grid lines, marking them with pieces of white rope.

Once the terrain was in place, soldiers started nailing into the ground 3x5-inch cards marked with the names of the operation&#8217;s objectives.

Late in the afternoon, soldiers watched as each of the units moved its own 3x5 cards in a day-by-day explanation of what it would be doing and where it would be.

&#8220;You can only make so much sense of an operation on paper, but once you see it on ground it makes it better,&#8221; explained 1st Lt. Garrett Kaye, company executive officer.

Soldiers say the drills help them better understand the entire picture of an operation.

&#8220;You know your piece, but this gives you a view of what the other elements are doing,&#8221; explained Sgt. Matthew Coulter, a forward observer with the company.

At one point, soldiers moved to a smaller, more detailed &#8220;map&#8221; on another patch of ground that showed the location of a handful of villages making up one of the operation&#8217;s key objectives.

&#8220;Since this is a company mission we enlarged the scale [of the rock drill] and actually used people moving [pieces] around, so it&#8217;s a larger-scale version [of the typical rock drill],&#8221; said Kaye.

Walking through the entire operation also gives soldiers one final chance to tweak specific parts of the plan.

Rock drills aren&#8217;t something specific to Able Company; it&#8217;s done throughout the Army.

Whether at the company- or brigade-level, the rock drill, Kaye said, helps smooth out any rough edges for an operation.