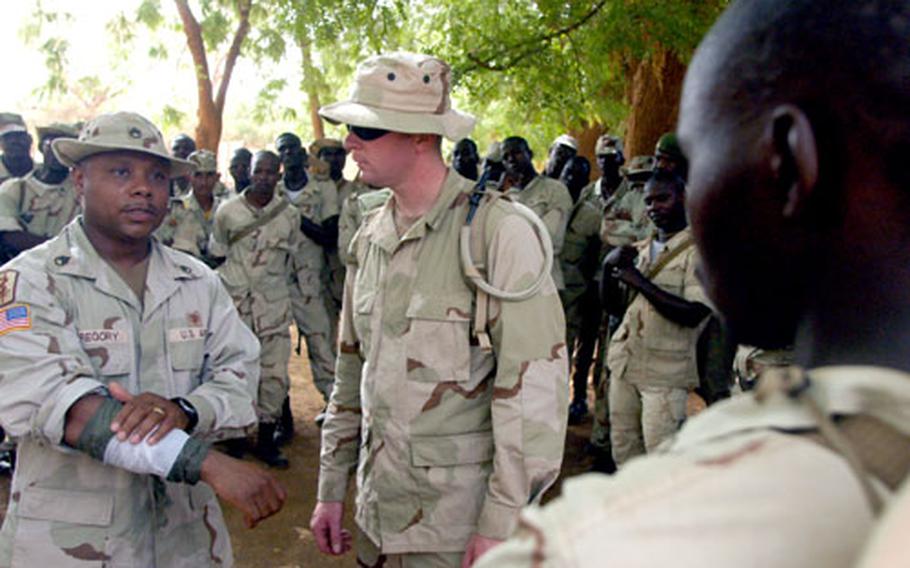 TAHOUA, Niger &#8212; A soldier quizzed his students: Why do we put dressing on an injury? What happens if we tie the dressing too tight?

Haque, a team leader with the 160th Forward Surgical Team, and other U.S. troops trained about 300 Nigerien soldiers Friday as part of Flintlock 05, a seven-nation exercise to train African troops and build U.S.-African rapport.

The Nigerien soldiers were confident. They&#8217;d already been trained by U.S. Marines and answered the questions that were posed.

Dressing is applied, one said, to prevent infection and stop bleeding. If the dressing is tied too tightly, another answered, blood would fail to reach the extremity (hand, foot) and tissue would die.

&#8220;We&#8217;ve been sent on a lot of missions outside our country, such as ECOWAS,&#8221; Nigerien Pvt. Idi Balla said through an interpreter, referring to the Economic Community of West African States&#8217; peacekeeping mission in Liberia in the summer of 2003.

Flintlock 05, which the U.S. European Command calls a Phase Zero operation, is an investment by the Stuttgart, Germany-based EUCOM. The goal is to make Niger and the other countries more stable and less susceptible to war.

Niger has seen turmoil. A military coup in 1996 was followed by flawed elections. Another coup in 1999 overthrew that government.

Soldiers from the 160th FST and the Stuttgart-based 1st Battalion, 10th Special Forces Group conducted the training at a sprawling schoolyard in Tahoua. Classes were held on a lawn of brown dirt in the shade of leafy green trees. Nigerien troops were taught how to treat chest wounds, broken limbs, burns and bleeding.

To help the Nigeriens retain what they were taught, Haque said Nigerien medics were being identified to carry on the training after the Americans leave later this month.

Time would tell, he said, if the effort of the U.S. troops would pay off.