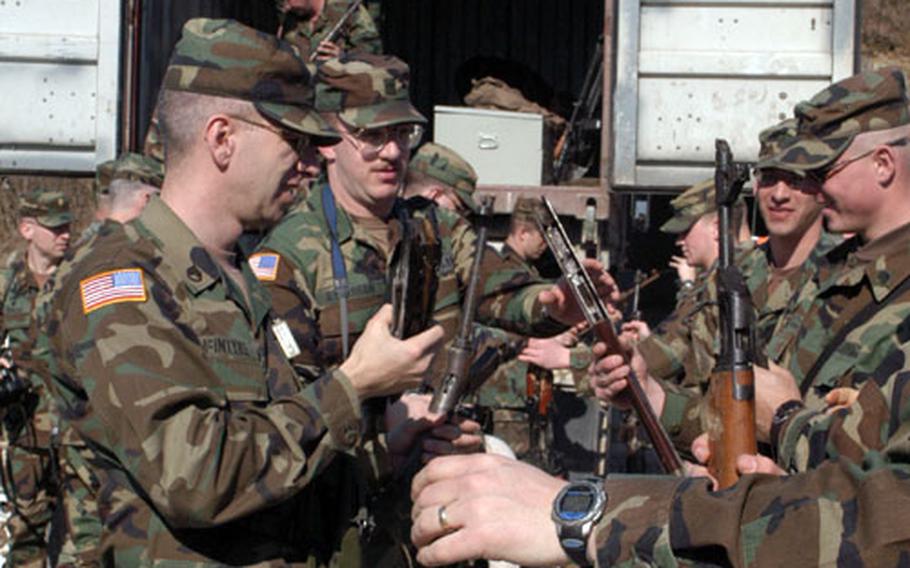 Soldiers of 1st Battalion, 109th Mechanized Infantry Regiment inspect crushed weapons and pass them to the storage container. After the wood is separated from the crushed weapons, the metal is melted at a steel factory. (Ivana Avramovic / S&S)

Soldiers of 1st Battalion, 109th Mechanized Infantry Regiment inspect crushed weapons and pass them to the storage container. After the wood is separated from the crushed weapons, the metal is melted at a steel factory. (Ivana Avramovic / S&S) 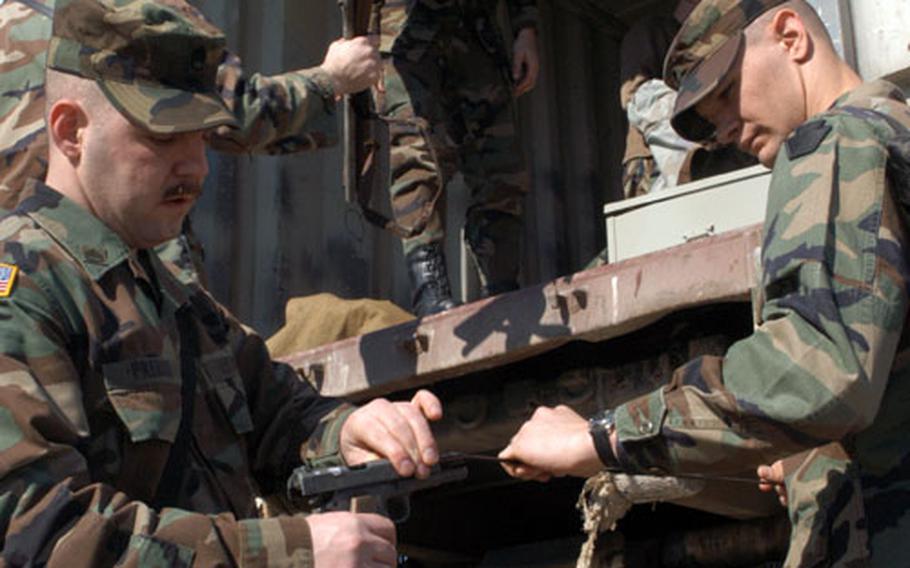 Staff Sgt. Andrew Prebich, left, and Spc. Eric Griffin, both of 1st Battalion, 109th Mechanized Infantry Regiment, make sure there are no rounds left in the weapons&#39; barrels before they are crushed. (Ivana Avramovic / S&S) 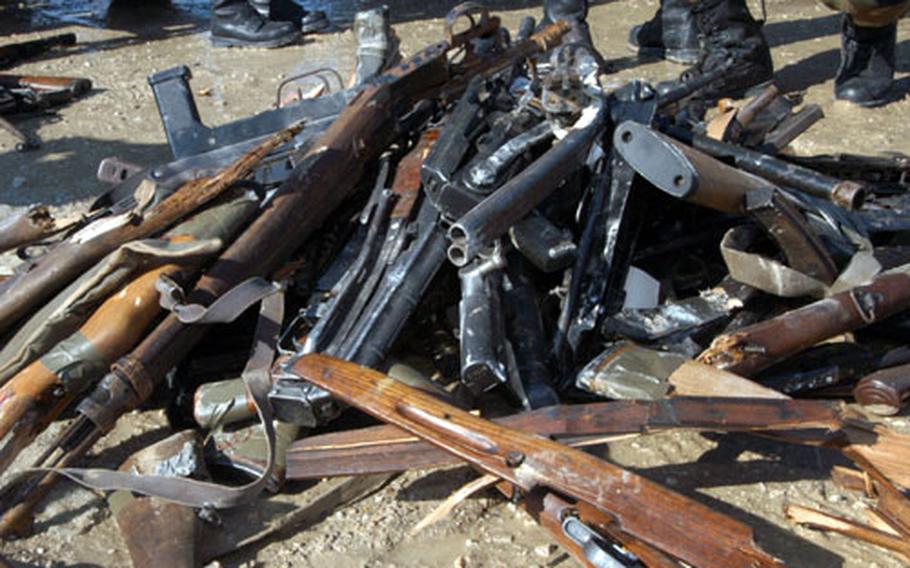 A pile of weapons after a Bradley ran over them. (Ivana Avramovic / S&S)

EAGLE BASE, Bosnia and Herzegovina &#8212; Task Force Blue Steel soldiers took one weapon at a time out of the shipping container, called out its number, checked a list and made sure there was nothing in the barrel.

Then they placed it on the ground, one end leaning on a wooden beam.

Once the weapons formed a long line, Spc. Joseph Granville started up his Bradley fighting vehicle and rolled over them.

Then he stopped, backed up and rolled over them a second time, making sure they were crushed and could never be used.

For months before the weapons crushing Friday, soldiers of the 1st Battalion, 109th Mechanized Infantry Regiment, also known as Task Force Blue Steel, patrolled Bosnian towns and villages talking to people and spreading the word that illegal and unwanted weapons should be turned in.

They were part of Operation Active Harvest, whose goal is to collect weapons left over from Bosnia&#8217;s war to try to make the streets a little safer.

Once the weapons were crushed, the wooden parts were removed and the metal melted at a steel company.

Stabilization Force has conducted numerous collections over the years and destroyed hundreds of thousands of lethal pieces.

But he believes there are still many weapons in civilian hands, leaving SFOR peacekeepers much to do.

As the weapons crushing continued, Searle pulled out a photograph of his 19-month-old granddaughter, Abigail, and her parents. He said he wanted the Bosnian children to play as freely in their country as Abigail does at her home in America, without worrying about weapons in the house or back yard.

Searle said he was proud of his soldiers and the work they have done in trying to bring Bosnian children closer to that.

The soldiers chose a Bradley rather than a bulldozer as a more visually appropriate method for crushing the weapons.

&#8220;How better to have peace pushed forward than to have soldiers destroy the instruments of war?&#8221; Searle asked.