Girl hides in box for hop to U. S. 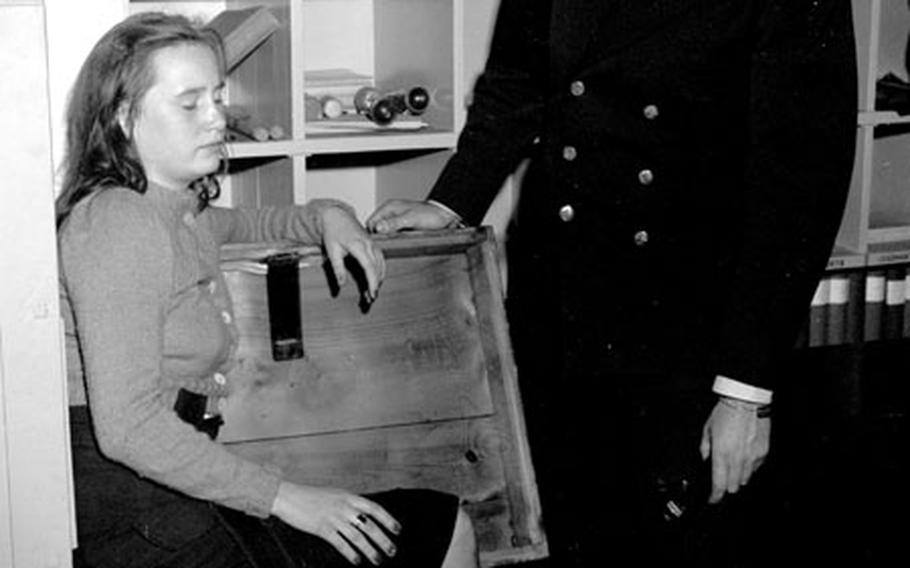 Doris von Knoblock was found hiding in a U.S.-bound crate at the Rhine-Main airport. The would-be recipient of the crate — her fiance, German refugee Rolph Berndt of New York — told the Associated Press he was mystified by the incident. "Thank God she's alive," Berndt said. "I don't think that was her idea." (Chris Butler/Stars and Stripes)

Doris von Knoblock was found hiding in a U.S.-bound crate at the Rhine-Main airport. The would-be recipient of the crate — her fiance, German refugee Rolph Berndt of New York — told the Associated Press he was mystified by the incident. "Thank God she's alive," Berndt said. "I don't think that was her idea." (Chris Butler/Stars and Stripes) 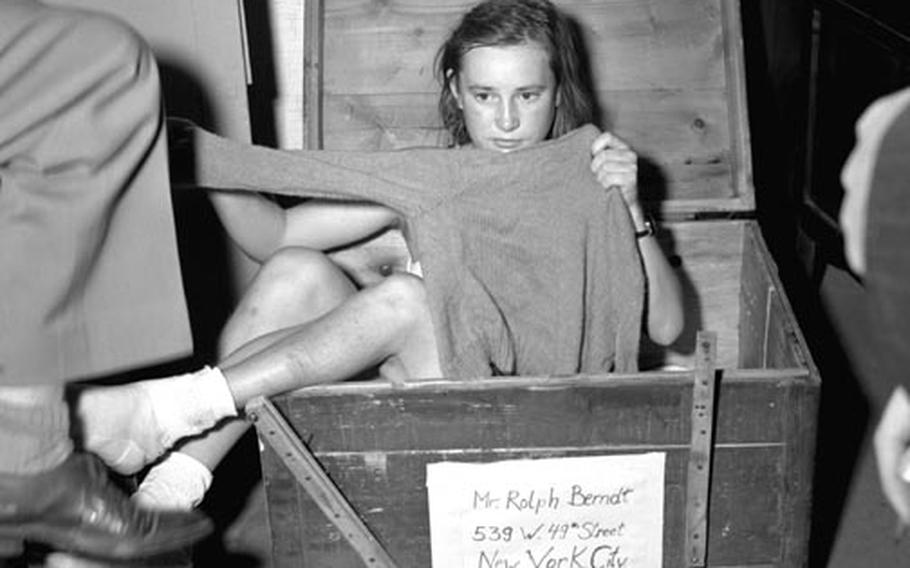 Doris von Knoblock, 20, was discovered in a U.S.-bound crate at the Rhine-Main airport. (Chris Butler/Stars and Stripes)

FRANKFURT, Oct. 2 &mdash; A diminutive young German girl, stowed neatly into a two-foot packing case locked and ticketed for the address of her sweetheart in New York, was found today in the baggage room of Rhine-Main Airfield, where the box had been left by a GI.

The girl revealed her presence to the startled eyes of baggage handlers by unlocking the lid of her box from the inside and raising it for a quick look around.

The baggage men called William Waring, operations representative for American Overseas Airlines, who pried open the box which by this time was again locked. He raised the lid to find himself gazing into the anguished eyes of the scantily-glad girl.

"Imagine the horror of being in there so long, and then being caught," were her first words.

She was wearing only a brassiere, skirt and socks, and as she climbed from her cramped 2 by 2 by 2&frac12;-foot container she exclaimed in less fluent English, "much hurt."

Army investigators took her in custody and learned that her name was Doris von Knoblock, that she had been employed since last April as a dental technician at the 1st Gen. Disp. at Darmstadt, and that she would be 21 next month. She had consumed most of a five-ounce bottle of tea lying in the box and had left three slices of bread.

Civilian airport officials said an American GI drove up to the airport at 3 p.m. yesterday with a packing case addressed to Rolph Berndt, at 539 W. 49th St., New York City.

The soldier said he wanted the case shipped by air express and that he would return today and pay the $130 shipping charges. Airport clerks waived the usual customs declaration pending his payment of the fees.

Under questioning, the girl said the GI who brought her to the airport was Pfc Robert Seidentopf, a fellow worker at the Darmstadt dispensary.

She said Seidentopf had aided her "as a personal favor." Seidentopf expressed amazement when confronted with the news at a Darmstadt court martial where he was appearing as a witness.

He said the girl often had spoken to him about some goods she wanted to ship to the U. S. and had asked him to call at her home for it yesterday and deliver it to the airport. He said she told him she had cabled her friend in the U.S. for $150 to cover the shipping charges, and that she expected this to arrive today. He said the girl was "not at home" when he called and picked up the box which he delivered to the airfield.

"She told me there was only some tapestry and statuary in the box," he said. He added a German driver had helped him handle the case. He said he had no romantic interest in the girl, and had delivered the box simply as a favor. Army investigators took Seidentopf to Wiesbaden for further investigation.

Airport officials pointed out that had the box actually been shipped it would have been stored in the unheated forward section of the plane. Flying the North Atlantic at 9,000 feet, the temperature would have dropped to 15 degrees below zero and the girl would have met certain death by freezing.

In addition, a pilots' strike has stopped transatlantic operations by AOA, and the packing box might have remained in the cargo room several days, perhaps stored under other cargo so that the lid could not have been opened.

The girl gave no explanation of why she was so scantily clad for her projected voyage, and while she carried a sweater and other warm clothing with her, there was no room to don it within the confines of the box. She put on the sweater immediately after her discovery. She said the 19-odd hours she had spent in the box had left her "a little tired" and with a stiff neck.

Tacked inside the bleak box was a small, red heart cut out of a piece of felt.

Army investigators took her to the airport cafeteria for a lunch which she ate with obvious relish, and then to Wiesbaden for further questioning.

At the Darmstadt dispensary, Army and civilian personnel were astonished when they learned from a Stars and Stripes correspondent of the girl's attempted adventure. M/Sgt. Leo P. Jauron, senior NCO of the unit, said she had been on duty until noon yesterday, some three hours before she arrived at the airport in the box. He said she had asked him some time ago to lend her $100 "to pay for a crate she wanted to send by air to the U.S."

Katerina Merlau, 19, also employed at the dispensary as a dental technician, said the girl also had tried to borrow American scrip from her, explaining she wanted to ship a dog to the U.S.

She said Doris told her that at the end of the war she was working in a Berlin hospital. She met. Rolph Berndt, half-Jewish, fresh from a year and a half in the notorious Sachsenhausen concentration camp. They fell in love, the bleak, gray love of two little people in defeated Germany.

Then Rolph got his chance, a visa to America as a political persecutee. He left in the spring of 1946, and they planned to meet and marry in New York.

She kept a little red heart stitched of felt.

There was nothing to keep her in the Russian Sector of Berlin, so she hit the road, travelling at night to reach the American Zone. She found a place to stay in Darmstadt, but the schools where she wanted to study medicine, or nursing, or pharmacy, were full. She found a job as a dental assistant in the Army dispensary at Darmstadt where medical officers described her an efficient worker.