Ginowan mayor heads to D.C. to push for closing of Futenma 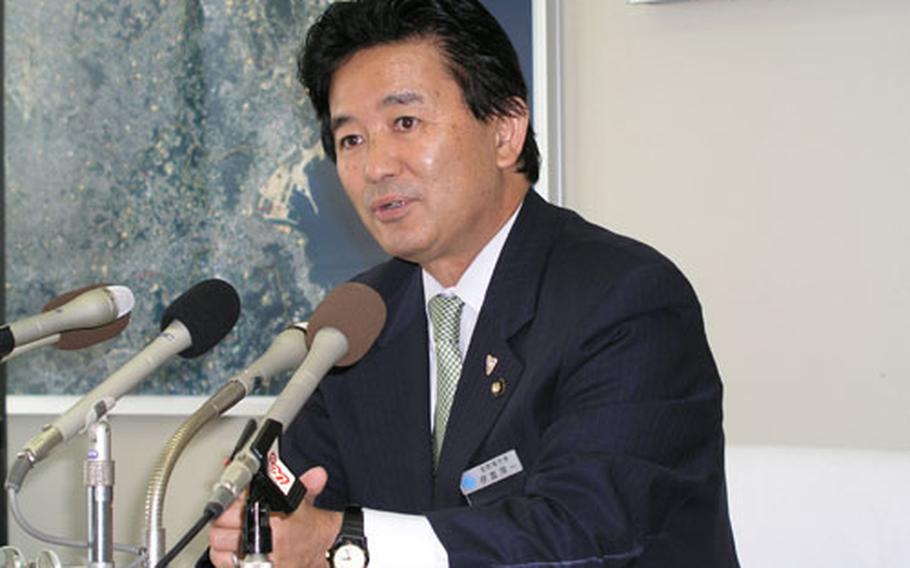 GINOWAN, Okinawa &#8212; Armed with photographs, reams of information, petitions and a firm resolve, Ginowan Mayor Yoichi Iha said he is prepared for his first trip to lobby Washington, D.C., and call for his neighbors, the U.S. Marine Corps, to move out of his city.

During a Friday news conference, Iha announced his 11-day tour includes meetings with officials from the Department of Defense, Marine Corps and both houses of Congress. He also plans to observe a House Armed Services Committee public hearing regarding the review of overseas military bases.

The mayor will also meet Lt. Gen. Wallace Gregson, commander of U.S. Marine Forces Pacific, in Hawaii. Gregson recently told reporters in Washington he would not oppose moving some Marines from Okinawa to mainland Japan.

In 1996, the United States and Japan agreed to close the air station, located in urban Ginowan, within five to seven years after moving the operations elsewhere on the island.

However, plans to build a new base on reclaimed land and the reef off Okinawa&#8217;s northeast shore at Henoko stalled. A group of mostly elderly residents continue to camp at the fishing port, preventing an environmental survey of the area&#8217;s watershed.

Iha took office April 2003 on a platform promising to close Futenma within five years. &#8220;Building a new airport in Henoko only destroys nature,&#8221; he said. &#8220;It is not a solution for residents in Ginowan, who suffer from incessant aircraft noise and the constant fear that aircraft might crash on their homes any moment.

Iha said the lobbying tour is well-timed. He cited recent Japanese news reports about U.S. and Japanese officials considering plans to move 2,600 of the 17,000 Marines on Okinawa to Japan&#8217;s mainland, and also reports of the United States and Australia reaching an agreement to jointly use a military training facility in northern Australia.

Besides government officials he plans to meet members of peace groups and the Washington news media.

&#8220;I want American people to know about our quagmire and convince them to help us solve the problem,&#8221; he said.