Gina Lollobrigida: 'I think this is my best movie' 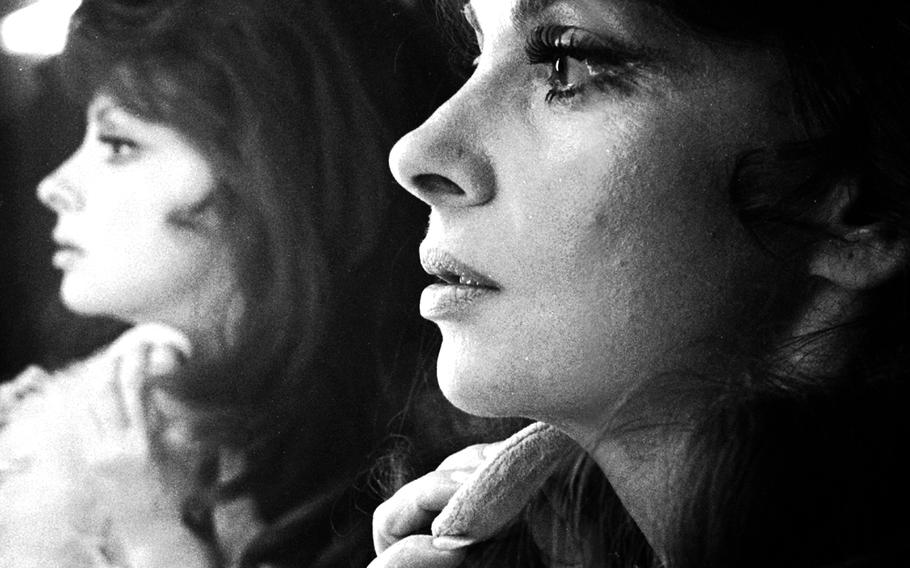 Buy Photo
Actress Gina Lollobrigida is reflected in a mirror in her dressing room during the filming of a movie, "King-Queen-Knave," at Munich in November, 1971. (Frank Pettengill/Stars and Stripes)

GINA Lollobrigida is as earthy and as sensuous a woman as ever depicted in a Hollywood press release.

Interviewed in her dressing room at the Bavaria Studios in Munich during the filming of "King. Queen, Knave," Gina said "a woman at 20 is like ice, at 30 she is warm and at 40 she is hot."

Referring to men at the same age she said in her sultry accent, "we are going up as they are going down."

IN THE FILM she plays the part of Martha Dreyer, the warbride of an Englishman (David Niven) who has settled in Munich. When her husband's ugly-duckling nephew, Frank (John Moulder Brown), arrives on the scene she at first rejects him and then seduces him.

"I have experience seducing nephews," she said, dressed in a low-cut blue slip she had been wearing on the set and a red shawl thrown over her shoulders. "I seduced my nephew in `Beautiful November,' so this is my second and experience.

When told 18-year-old John Moulder Brown was afraid of the love scenes yet to be filmed, she laughed and said he shouldn't be afraid of her. Then, reflecting, she said she was afraid of the director, Jerzy Skolomowski — "how he is going to have me do it." She worried about how earthy it was going to get.

"I think this is my best movie," she said, reasoning that the character she played was a complete woman — an angel and a devil. She explained the three main characters were all pretty bitchy people, and her character was the bitchiest of all.

THE PLOT has a little of everything in it: comedy, tragedy and an ironic twist at the end, she explained unsmilingly.

She had been upset earlier in the afternoon by a phone call from Geneva, Switzerland. She had thought her son, Milko, who is attending school there, had been injured.

Frantic calls to Geneva and Rome tracked the call, which proved to be only an invitation to a party. Meanwhile the shooting of a scene had been interrupted several times as the volatile actress charged off to the phone.

Her temper on and off the set has caused considerable consternation among her fellow workers. Three changes of schedule were caused by "eye problems, a spokesman for the Maran-Wolper production said.

Her personal life is as eventful as her screen life. She sings, paints and takes photographs. Her picturing-taking is good enough for Time-Life's National Graphic Society to want to publish her photos of Italy under the title of "My Italy, With Love" next year.

During the past couple years she has donned disguises and wandered throughout her native land catching Calabrese fisherman, mountain peasants, Florentine nobility, merchants, beggars, women and hosts of children on her film. In all she says she has more than 15,000 pictures from a hobby she took up years ago, when she found she didn't have time to paint.

Before coming to Munich she completed an Italian television production about Pinocchio and recorded a record in Italian. The two sides are "In My Orchard," which she describes as a sexy number, and "Take Me," a ballad. This winter she will record them in other languages, then go to New York to help edit her photography book.

Tossing her hair she said, "I do what I like now. I just don't have time for it all."