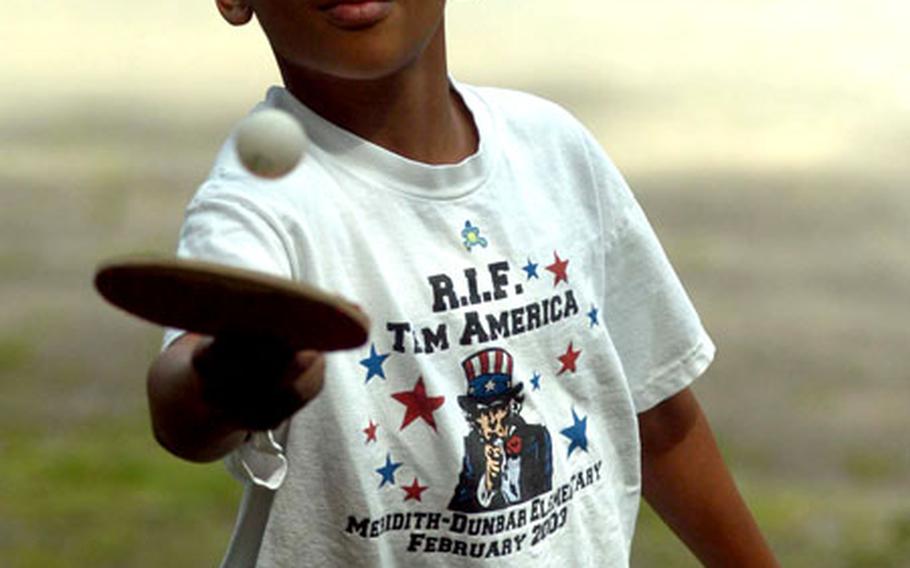 Osaze Anyabwile, 8, keeps his eyes on the ball as he juggles it on his racket during outdoor games at Dragons, Dreams and Daring Deeds in Giessen, Germany, part of the 284th Base Support Battalion’s summer reading program. (Michael Abrams / S&S)

Osaze Anyabwile, 8, keeps his eyes on the ball as he juggles it on his racket during outdoor games at Dragons, Dreams and Daring Deeds in Giessen, Germany, part of the 284th Base Support Battalion’s summer reading program. (Michael Abrams / S&S) 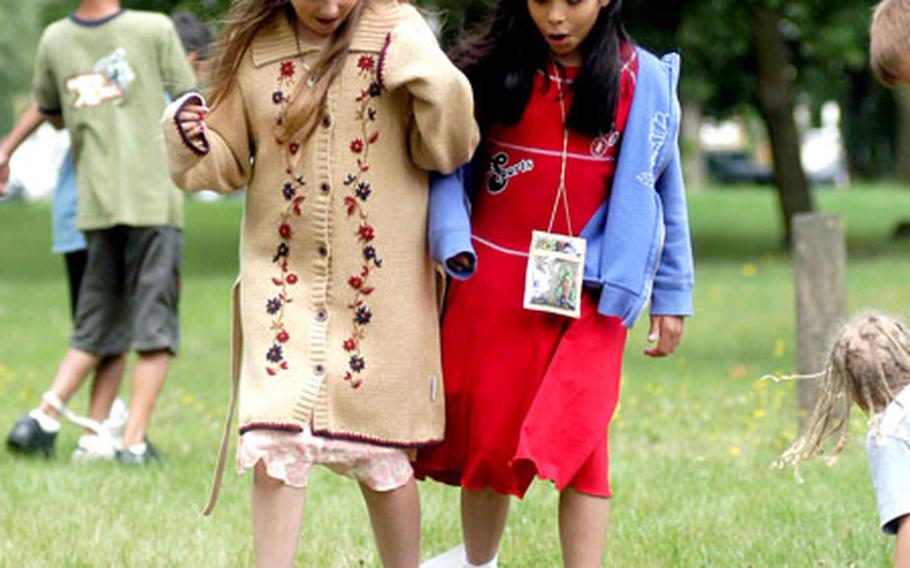 Kaitlin Hale, 10, left, and Chelsea Mancilla, 9, give their best in the three-legged race during the fitness portion of a summer reading program on Giessen Depot. (Michael Abrams / S&S)

GIESSEN, Germany &#8212; Once upon a time there were 20 children who trained to become the toughest dragons, and then shifted to become the strongest knights they could be.

As with every great beast or warrior in the history of the world, this could only happen by developing great physical strength and eating well-balanced meals.

That&#8217;s why the Dragons, Dreams and Daring Deeds summer reading program at the 284th Base Support Battalion&#8217;s library on Giessen Depot has brought elements of fitness into the reading room.

After a morning of reading Wednesday, the staff moved children outside to participate in different obstacle courses to help train for daring deeds.

Summer reading programs in military communities across Europe are adding elements of imagination through a medieval theme to entice children to read more. The programs continue through July 27.

In the Giessen community, the medieval theme stretched outside the library&#8217;s doors to also encourage children to make fitness a regular part of their lives.

Aaron Smith, the 284th BSB fitness coordinator, started the children out as dragons, having them spread out their wings as far as they could go.

Then, the shape-shifters began the knight training, competing to become the fastest and strongest.

&#8220;Today, as part of the summer reading program we&#8217;re giving out information on nutrition, trying to get the community involved in health and well-being,&#8221; said Smith, who has worked for about one year as Giessen&#8217;s fitness coordinator.

&#8220;As children grow up, they absorb a lot of fundamentals, so we&#8217;re trying to instill in their minds right now that fitness and health is important,&#8221; he said.

&#8220;Hopefully, when they grow up they will have the same attitude toward it that they learned today.&#8221;

This attitude came out as the sound of a roar, as the children vied to be the best.

During one event, two brothers with locked arms barreled through the three-legged race competition.

The Anyabwile brothers, Diarra, 10, and Osaze, 8, said their plan of attack for the race was the speed behind their tied-together legs.

&#8220;Whoever makes it across the finish line first will be the coolest dragon in my book,&#8221; he said just before sending them off to compete.