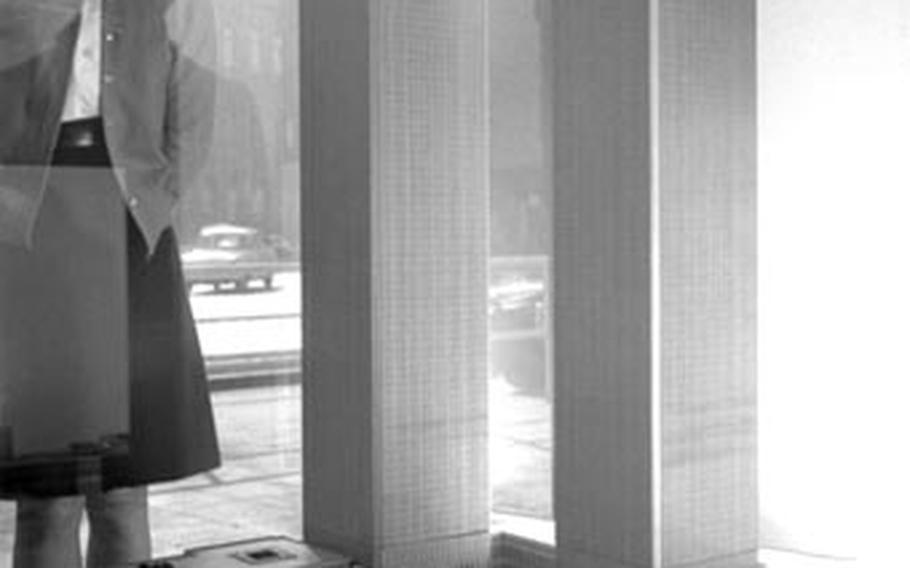 Buy Photo
A model of the World Trade Center is displayed in Frankfurt, Germany, as construction of the New York skyscrapers was scheduled to get under way in 1965. (Ted Rohde/Stars and Stripes)

The fabulous New York City skyline is in for some tall changes. Spectacular twin towers &mdash; principal structures of the World Trade Center &mdash; will be the tallest buildings in the world.

The gleaming metal towers will rise 110 stories or 1,350 feet above the nearby Hudson River in Lower Manhattan. Midtown's 102-story Empire State Building will then have to take second place as global giant.

Since May 1, 1931, the tallest-building-in-the-world distinction has been held by that soaring skyscraper. Although its total height is listed as 1,472 feet, 222 feet belong to a television tower added in 1950.

The center will feature an open plaza of almost five acres surrounded by reflecting pools and multilevel buildings that will encircle the plaza except for the grand entrance on Church Street.

For those familiar with New York City, the 16-acre site on which the international trade complex will be built is bounded by West Street on the west, Barclay and Vesey Streets on the north, Church Street on the east, and Liberty on the south.

Included in this area are the existing Hudson Terminal Buildings and the outmoded terminal of the Port Authority-Trans-Hudson (PATH) system, the former Hudson and Manhattan Railroad. The Trade Center will include a new and spacious terminal for PATH and provide convenient access to subways.

It is estimated that the construction cost of the center will be $350 million. The vast undertaking will be a responsibility of the Port of New York Authority, in accordance with legislation enacted by the States of New York and New Jersey.

Housed in the immense project will be an extensive representation of the world trade community &mdash; bringing together for the first time in one location all the specialized activities and information required to conduct export-import trade quickly and efficiently.

Here, virtually an entire community of 50,000 people, the center's daily working population, will be dedicated to streamlining and expanding world trade. Daily visitors are expected to total 80,000.

About 2,000 firms are expected to be tenants.

There also will be auditoriums of varying sizes. Some of these areas will be equipped with instantaneous multilingual translation and motion picture facilities. Interpreters will be available to converse in most major tongues. Multilingual stenographers will be on hand to fulfill secretarial needs of visitors from around the globe. Temporary offices for visiting executives are planned.

The design of the twin towers has been described as an engineering "tour de force" &mdash; solving the two problems which have long plagued conventional skyscraper design &mdash; space-consuming elevator shafts and high structural cost.

In the unique structural framing system proposed for the center, the exterior wall of the buildings will carry the vertical loads, resist the lateral wind loads and provide a dividend in the form of column-free interiors, which will permit complete flexibility in space layout. The design also offers maximum efficiency in structural resistance to wind load.

Great steel columns will form the exterior wall and support the structures at 3&frac14;-foot intervals. The columns will serve as dramatic frames for the floor-to-ceiling, windows in each tower. The outer ribs, only 22 inches apart, will provide for relatively narrow glass windows. The effect will be a glistening steel skin unbroken by the usual horizontal window lines.

The skyscraper cannot exist without the elevator, but all skyscrapers pay a penalty because of the large floor areas consumed by elevator shaftways. The problem was brilliantly solved in the center by the introduction of the "skylobby" system &mdash; a system similar in concept to horizontal mass transit.

The building is divided into three zones, the first zone extending from the first to the 40th story; the second from the 41st to the 73rd; and the third from the 74th to the 110th story. The 41st and 74th floors are the skylobbies. These floors are connected to the main ground floor lobby of the building by large high-speed express elevators.

People entering the building and bound for the upper two zones are moved by express elevators to the skylobbies. Here they transfer to local elevators which serve all floors within the zone.

The lower skylobby is served by 11 and the upper skylobby by 12 high-speed express cars traveling nonstop from the ground floor.

There are 72 local elevators in each tower. Transportation time to any point in the building, including transfer at the skylobby, will not exceed two minutes. The wait for an elevator, even during rush hours, will never be more than 30 seconds.

Altogether, there will be 230 passenger elevators in the center, including the plaza buildings. Those serving the tower will have a speed of more than 1,700 feet per minute &mdash; the fastest elevators in the world. Capable of transporting 55 people at one time, the car's design allows passengers to enter one side and leave through the other.

On clear days the view from the top of the towers will encompass a breathtaking panorama of 45 miles in every direction.