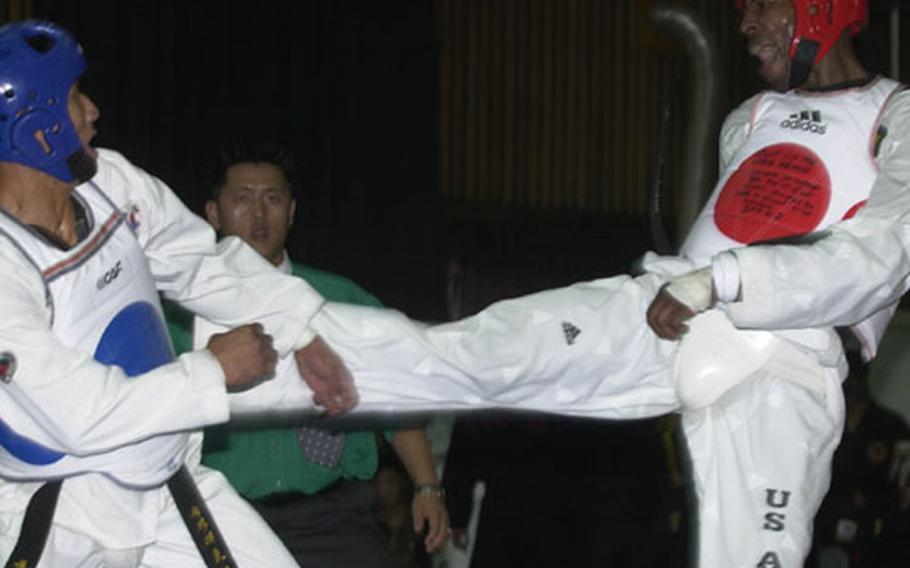 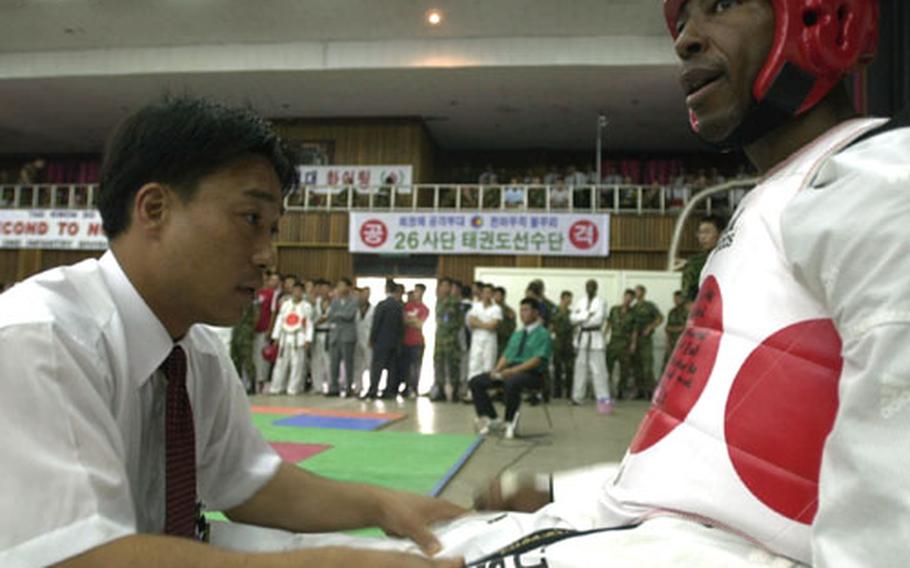 Spc. Louis Davis rests in between a second-round match at the ROK-U.S. Friendship Tae Kwon Do competition. (Jeremy Kirk / S&S)

Birch, along with other South Korean army soldiers, was demonstrating the power of tae kwon do, one fist at a time. The plastic pallets are perforated but extremely hard, said Birch.

Before striking them, Birch huffed and hissed, concentrating on driving his fist straight through to the floor.

The demonstration was a break from the ROK-U.S. Friendship Tae Kwon Do competition, an intense fighting championship at the South Korean army&#8217;s 6th Corps headquarters that pitted 30 South Korean and six U.S. soldiers against each other. U.S. soldiers performed remarkably well in the country that gave birth to the sport, snatching two first place and two third place spots in different weight classes.

It was their best showing in three matches since September, and the U.S. contingent received the invitational flag, proudly waving it before Maj. Gen. John Wood, the division commander.

The event also reinforced the strong bond between U.S. and South Korean soldiers. In addition to shouting their own anthems, the South Koreans waved U.S. flags, beat drums and chanted U.S. soldiers&#8217; names during the matches.

The two U.S. soldiers who placed first are hardly strangers to the sport. Spc. Louis Davis, 32, has been doing tae kwon do since he was 14, and captured the top spot in the light welterweight category.

He started studying the sport in Minneapolis. Both his father and stepfather were deep into martial arts, Davis said.

On his body armor, Davis wrote a passage from the Bible: &#8220;Put on the whole armor of God so when the day of evil comes you may be able to stand your ground.&#8221;

It got him through Friday. Davis enthusiastically hugged Staff Sgt. Kevin Williams, a cool-headed kicker who finished first in the middle heavyweight category, after the two received medals.

The unflappable Williams twice struck his opponent in the head with his foot and fired direct kicks to his chest, knocking him down at least twice in the final round. Afterward, Williams said simply: &#8220;I wasn&#8217;t going to lose.&#8221;

Williams was on the All-Army team for seven years. Tall, stolid and confident, Williams held his comments and power in reserve, waiting for the right moment.