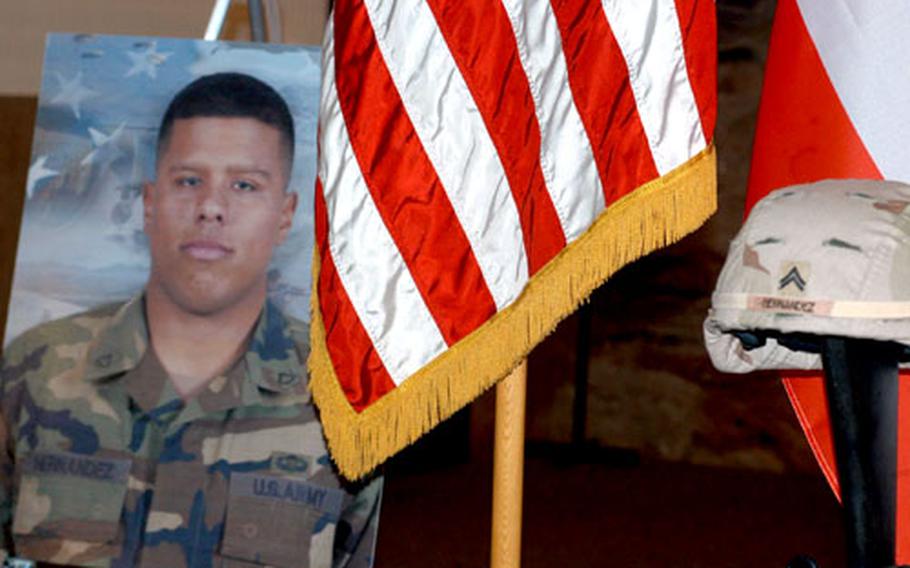 Hundreds of people gathered Monday in the chapel at Caserma Ederle in Vicenza, Italy, to remember Cpl. Emmanuel Hernandez-Cales, a soldier from the Southern European Task Force (Airborne) killed last week in a rocket attack in Afghanistan. (Kent Harris / S&S)

The 22-year-old, who died Wednesday in a rocket attack in Afghanistan, was remembered as &#8220;an excellent leader, a distinguished soldier and a great friend.&#8221;

For Jessica Hernandez, her high school sweetheart and husband of 18 months was someone who could always make her laugh.

&#8220;It&#8217;s always hard for all of us who are fighting a war to lose a comrade,&#8221; he said. Hernandez, a member of Battery D, 319th Field Artillery Regiment, is the sixth member of SETAF to lose his life since it took over command of operations in Afghanistan on March 15.

Hernandez and Sgt. Michael J. Kelley, a member of the Army National Guard, died when insurgents fired rockets at a CH-47 Chinook helicopter that had landed at a forward operating base near Shkin. Eight people were wounded in the attack. The soldiers had been waiting to unload cargo from the helicopter when they were hit by shrapnel.

Savusa and a few other soldiers who attended the service were dressed in desert camouflage because they were on rest-and-recuperation leave.

Most of the other soldiers at the service, representing a large majority of those remaining in Vicenza, were in the normal battle dress uniform.

Jessica Hernandez said she was happy with all the support.

Maj. Jacky Howard, who recently gave up command of the battery, said Hernandez was &#8220;a superior NCO-in-the-making.&#8221;

He recalled a time before the deployment to Afghanistan when Hernandez was called to pick up another soldier at the airport in Venice. When the soldier arrived, he saw Hernandez all decked out in winter weather gear.

All the windows of his car had been broken in a burglary and he had to drive down the autostrada with a cold wind streaming through.

Howard said Hernandez had been involved in a debate shortly before he died with several other soldiers about whether to stay in the Army. Hernandez had said he had no doubts about re-enlisting. Three soldiers re-enlisted in his honor at the forward operating base on the day he died.

Hernandez is survived by his mother, Eli Cales; and two sisters, Eleydis and Eligia Hernandez. He is scheduled to be buried Sunday in Puerto Rico.